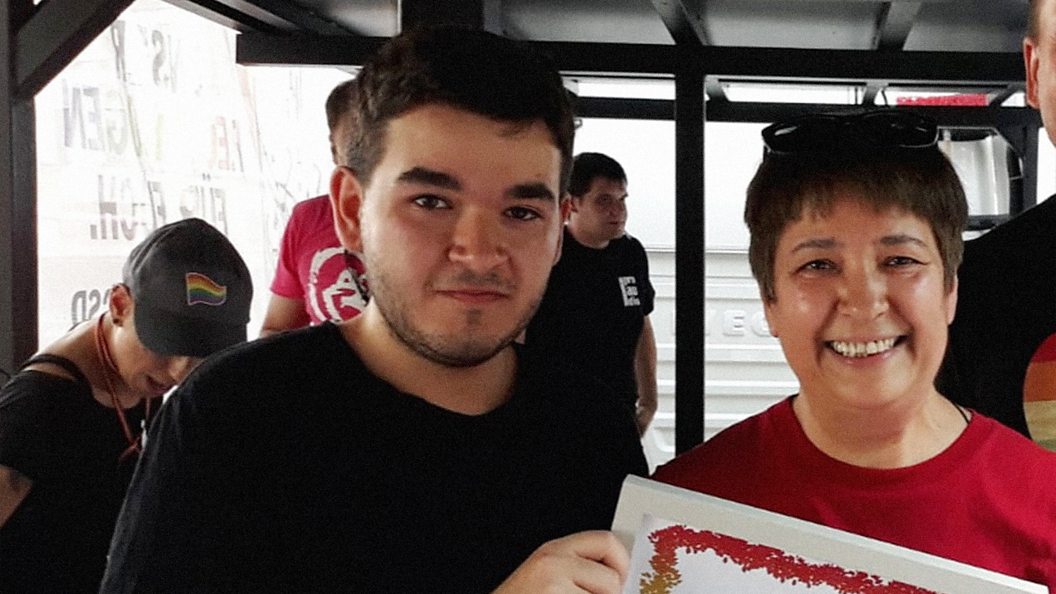 Berlin – Now 21-year-old openly gay Muslim Tugay Sarac tells his story of near radicalization and finally acceptance to Rahil Sheikh and published by the BBC. What follows is an abridged version of his story in his own words:

“Sitting in my bedroom alone, a wave of fear washed over me. I was 12 years old, confused, and scared – I was beginning to realize I was gay. My dad was watching TV in the living room, and all I could think about was how disappointed he’d be if he ever found out. I grew up in a Turkish neighborhood in Berlin. My family are conservative Muslims and my dad was always pretty strict. But we were still close …. [But] [h]e was the one who first made me feel like being gay wasn’t acceptable. He didn’t outright tell me I couldn’t be gay – it was more like he had just never considered it as a possibility for his child.

“My dad’s attitude wasn’t the only thing that made me feel like I needed to hide my sexuality. I was also frightened of what people in my community would say. I had overheard people saying bad things about gay people on TV …. I didn’t want people to think I wasn’t a real man, or a real Muslim. Then when I was 13, I lost my dad to stomach cancer. The grief hit me hard. Religion became my way of coping ….. I thought that if I devoted myself to my faith, I could forget about my sexuality …. That how I started to follow a more radical form of Islam. I’d secretly search online for blogs and videos about radical Islam …. My searches led me to Youtube videos of ‘online preachers’ giving hate-filled sermons …. They talked about things like how there shouldn’t be equality between men and women, and that anyone who believed in a different god should be killed …. They were so charismatic … I could feel myself being sucked in …. By the time I was about 15, I started feeling like I wanted to be around other people who shared the views I saw onscreen …. I started hanging out with them in a local Turkish cafe …. We were hearing more and more about the rise of the so-called Islamic State and we’d talk about joining them …. I was naive – I mistakenly saw IS as a force for good …. I was obsessed with being a ‘good Muslim’ and following the teachings of the online preachers so that I wouldn’t go to hell for being gay. Two more years passed, and I still knew deep down I was gay …. [A non-radical friend told me IS was killing innocent people and] sent me a video that changed everything – it was a beheading of a civilian. I felt sick – how could I have got this so wrong?

“It was a line from a Youtube news show, ‘The Young Turks,’ that changed my path. ‘Why would you believe in a religion or a God if this God hates you, if this God will throw you to hell and let you burn forever?’ the presenter asked. That question got me thinking. I hadn’t chosen to be gay, so why would God punish me for it …. If I couldn’t be gay and Muslim, I wondered, should I be Muslim at all? .… Then I heard about a new, liberal mosque in Berlin called Ibn Rushd-Goethe, that was right on my doorstep. It has a female imam, lets Muslims of all genders pray together, and accepts gay, lesbian, and transgender Muslims. It’s caused controversy in the Muslim world, receiving condemnation from Turkish organizations and even a fatwa from Egypt but for me, it was a light in the darkness. When a gay imam from Marseille, France, visited the mosque and delivered a seminar, my mind was blown – I began to realize that being gay and Muslim at the same time is natural and normal …. I saw a way to reconcile my religion with my sexuality …. [and tell my family] I was terrified, until my aunt broke the silence. ‘I always thought you were gay, Tugay!’ she said .… Since then, my mum, aunt, and sister have been fully supportive …. If I hadn’t found a place where I could truly be myself, I truly fear what I might have become.” (BBC – Rahil Sheikh at bbc.co.uk/bbcthree/article/cc70b8a4-f14f-4324-a81a-82fe347f9664)