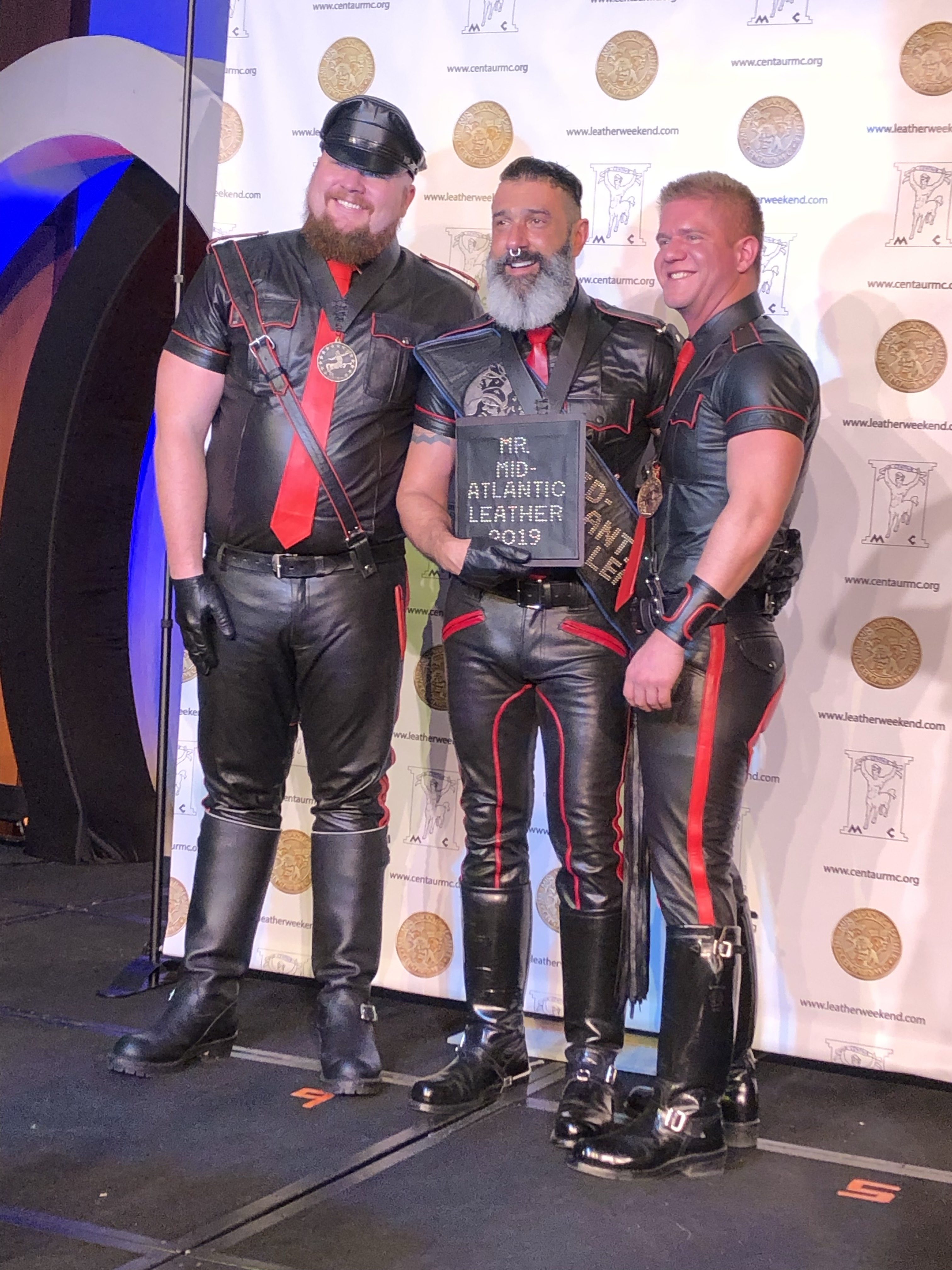 MAL 2019 was held during a very cold weekend in our nation’s capital that found the city’s streets clogged by both the Right to Life March and the Women’s March. In a city still dealing with a government shutdown, MAL 2019 provided an escape from the problems of the outside world. It was also a very special MAL for me because over the summer my partner Sir Steve, Mr. Maryland Leather 2007, had been asked to help selected Mr. Mid-Atlantic Leather 2019. This brought him up from wintering in Florida for a short visit. Joining him at the judges’ table were International Mr. Leather 2018 Boy Jimmy (aka James Lee), Mr. Leather Italy 2017 Fabrizio Paoletti, Miss Gay Universe 2011 Destiny B. Childs, from the European Conference of Motorcycle Clubs Daniel Dumont, Ms. Baltimore Eagle 1999 Buz, and Mr. Mid-Atlantic Leather 2018 Gérard Turner.

On Saturday morning while Sir Steve was off doing the contestant interviews, I joined the Mid-Atlantic Uniform League for their coffee and doughnut social. It was even bigger and better this year. At noon on Saturday officials from International Mr. Leather and a large group of titleholders who will be competing at IML in Chicago in May gathered in a top floor ballroom overlooking the Capitol dome to hear the announcement of the IML judges. Everyone was thrilled to hear Centaur MC President Todd White’s name announced. No additional confirmation hearing was needed for this judge. There will also be some changes at IML this year. For one, the International Mr. Bootblack contestants will give speeches. For a full list of judges and all the details about IML 2019 visit Imrl.com. Saturday afternoon also included the “Puppy Park,” the ONYX fashion show and fundraiser, and SIGMA demonstrations. The large leather vendor mart which filled several ballrooms was also busy all weekend.

Saturday night brought what I consider the leather social event of the season: “Leather Cocktails.” This formal leather cocktail party started in 1976 in New York and never disappoints. This year’s theme as “Around the World” and saluted the Centaur, MC’s former weekend camping run that was called Olympia. The ballroom was decorated with large posters from past Olympia events and featured buffets of Mexican food, Japanese sushi, American sliders (beef burgers, BBQ pulled pork, and Maryland crab cakes), and French pastries. My good friend open bar was also there.

After a brunch on Sunday, the contest was held. Emceed by Mr. Mid-Atlantic Leather 1993 Frank Nowicki, the six contests were judged in barware, jock/ physique, formal leather, and answered a fun question. This year’s questions ranged from describing a fantasy with Santa to explaining how Ford could design a new vehicle for pups. Making sure that the judges were happy and had beverages was ONYX member Otter DX. The task of keeping score went to International Ms. Leather 2016 Lascivious Jane and her partner Simon, an associate professor and chair of women’s and gender studies.

MAL concluded on Sunday evening with a dance at the 9:30 Club featuring music by Tedd Patterson and Manny Ward. There was also a wonderful performance by Ultra Nate. In a perfect ending to MAL, as I was leaving the 9:30 Club to catch the last shuttle back to the hotel, I ran into Mr. Mid-Atlantic Leather 2019 and was able to hug and congratulation Emerson one more time. I first met him several years ago and I know he will continue the tradition of making the Mid-Atlantic leather community proud.

Thank you, Centaur MC, for another great MAL. This is the 49th year for the club and the Centaurs are already making plans for their 50th anniversary. A web site has been set up to collect stories and pictures of the club’s history. Visit Centaur50.org for details. You will not want to miss MAL in 2020!