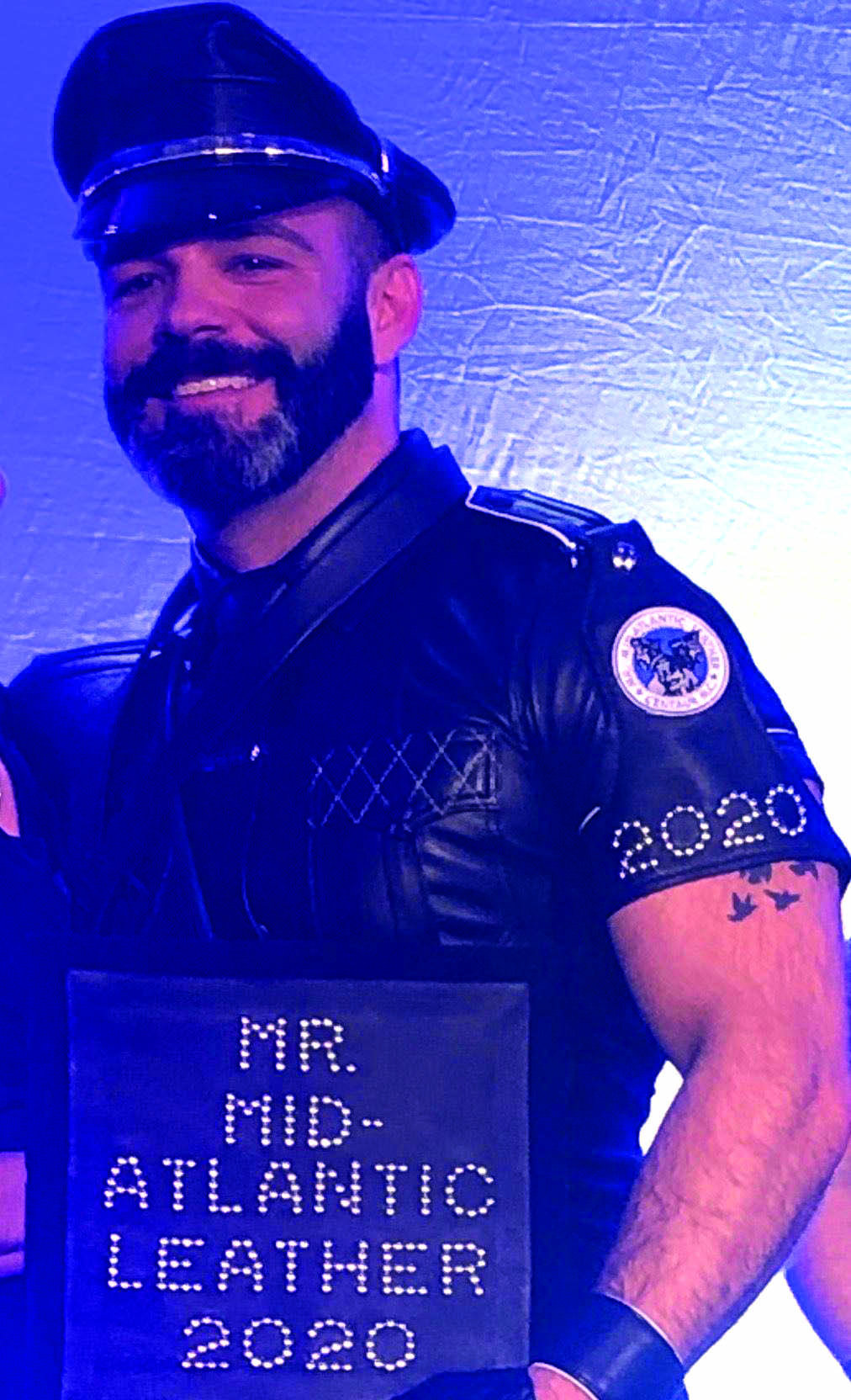 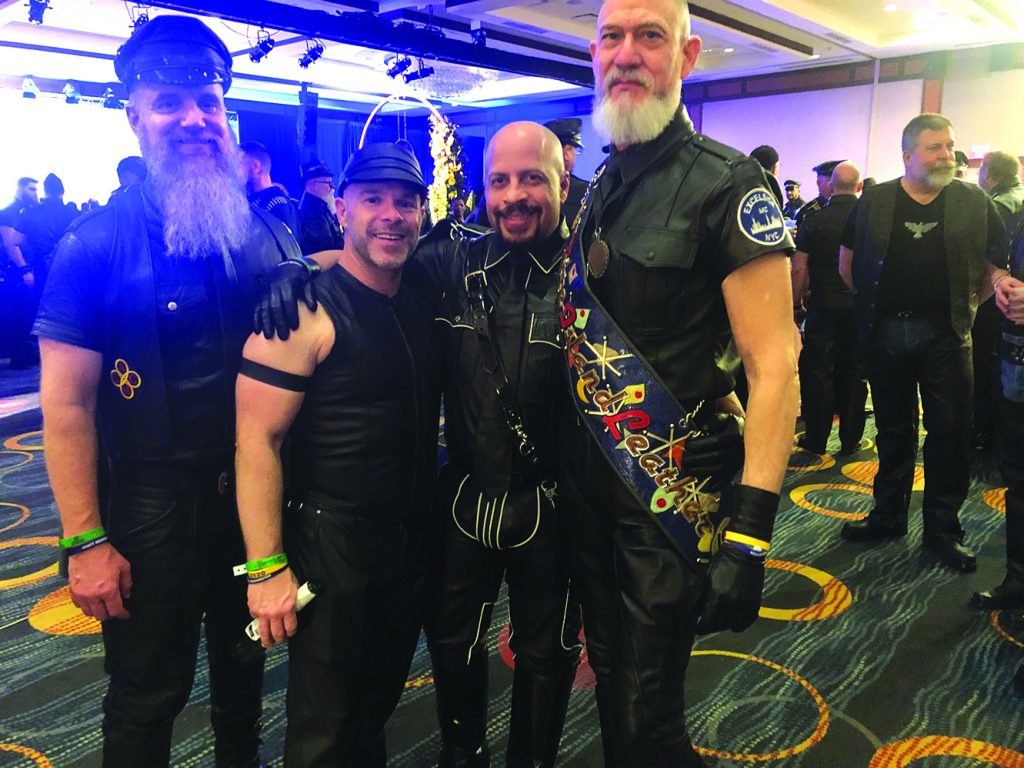 MAL kicked off on Thursday, January 16th when a group of Mr. Mid-Atlantic Leather titleholders hosted a bar night at the DC Eagle with the proceeds going towards the travel fund for the new titleholder. One highlight was a quilt made from MAL t-shirts from past years donated by Centaur MC member Mickey Braden which raised $4,000. On Friday, January 17th the Hyatt became the place to be for the world’s leather community as weekend attendees arrived from near and far. Informal cocktail parties in hotel suites and official MAL events filled the large establishment. There was everything from the Superheroes Meetup and the Rubber Cocktail Party to smaller cocktail parties hosted by ONYX, ShipMates, and other leather clubs. Later in the evening the Highwaymen TNT hosted the popular Impact Sauvage Dance. Friday also marked the opening of the large leather vendor mart. Saturday at MAL is filled with traditions. There is the puppy park, the ONYX fashion show, SIGMA demos, and a press conference – attended by the current leather titleholders who will be going to Chicago in May for International Mr. Leather – during which the IML judges are announced. I also enjoyed cocktail parties hosted by the DC Boys of Leather and the Knight Hawks of Virginia. Saturday evening brings what can only be described as the leather social event of the season: Leather Cocktails. This was the 46th year for this formal leather cocktail party that traces its roots back to a gathering in 1976 at the Waldorf-Astoria Hotel in New York. Once again Centaur MC member Douglas Gowin outdid himself with spectacular decorations and presented “Alice Through the Look-Glass.” Guest entered the ballroom through an elaborate looking-glass (which was moved to the stage on Sunday for the Mr. MAL contestants to enter through). Dominating the room was an over-the-top live floral arrangement with bright springtime flowers on one side, a mirror in the middle, and dark tropical flowers on the other side. (One usually must go to the Rose Bowl Parade to see a flower arrangement that grand!) There was a three-hour open bar and several buffets with everything from sushi to pasta, and sliders. Towards the end of the party the was a parade of club colors with representatives from the many leather clubs in attendance hitting the stage. The party ended with the traditional dropping of a cock ring in a brandy snifter by a prominent member of the community. This year Centaur MC President Todd White invited “First Lady of Leather” Mary Elizabeth onstage to perform the honor. Mary Elizabeth had the crowd roaring when she delivered one of the best lines of the weekend when she informed Todd, “I’m not taking off my cock ring!” On Sunday after brunch and coffee with MAUL (Mid-Atlantic Uniform League), the contest was held. This year’s contest was judged by Mr. Mid-Atlantic Leather 2019 Emerson Aniceto, International Mr. Leather 2019 Jack Thompson, Emperor 8 of the Imperial Court of Washington, DC Rudy Legg-Benavides, past president of the Chicago Hellfire Club and Inferno Coordinator David Katzenberg, Mr. Chicago Leather 2019 Saber, popular leather community contest producer, emcee, judge, writer, and comedian Karen Ultra, and Mr. Leather Belgium 2018 Bart Verrecas. The job of judges’ boy went to Mr. DC Eagle 2020 Justin Sawyers and this year’s tally masters were Ms. Gay Universe 2011 Destiny B. Childs and Mr. Leather Ireland 2019 Fionn Scott. The contest was once again brilliantly emceed by Mr. Mid-Atlantic Leather 1993 Frank Nowicki. 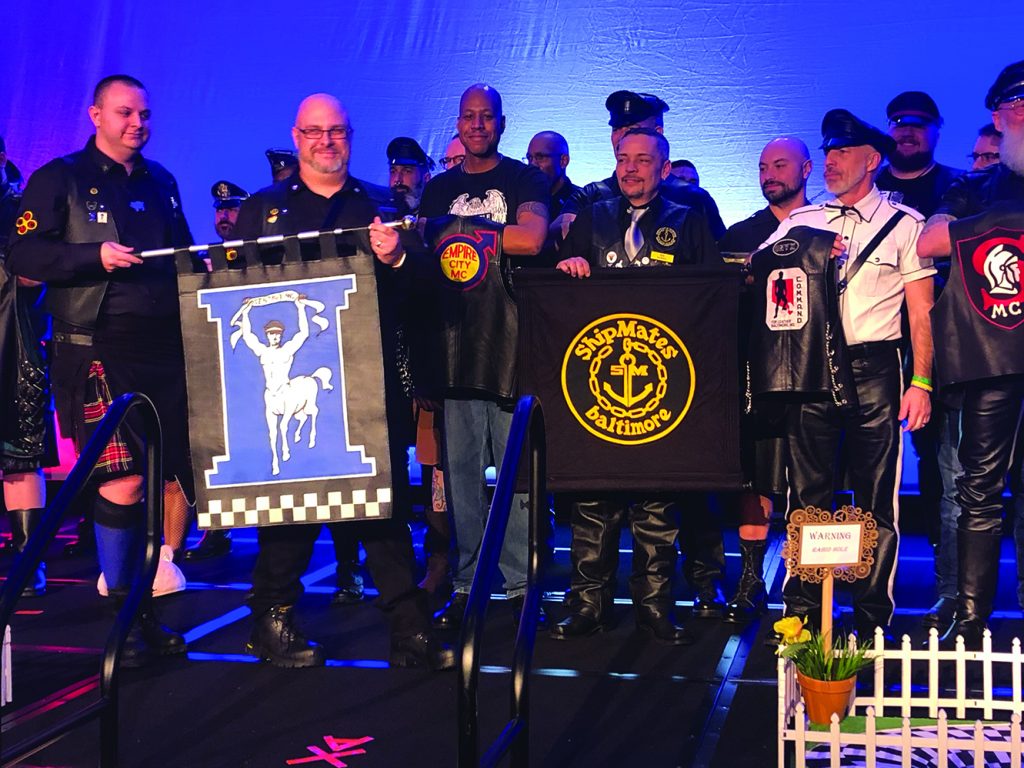 MAL ended on Sunday evening with the popular Reaction dance at the 9:30 Club with DJ Hazmat who had the dance floor packed with a mix of classic and new dance hits. This is the 50th anniversary for the Centaur MC and once again they produced one of the best leather events of the year. As I was checking out of the Hyatt, I inquired about booking my room for January 2021. I was told to do so online. By the time I returned to Baltimore, I was too late. The 880-room hotel sold-out in 45 minutes for next year. I guess I wasn’t the only one who had a good time!