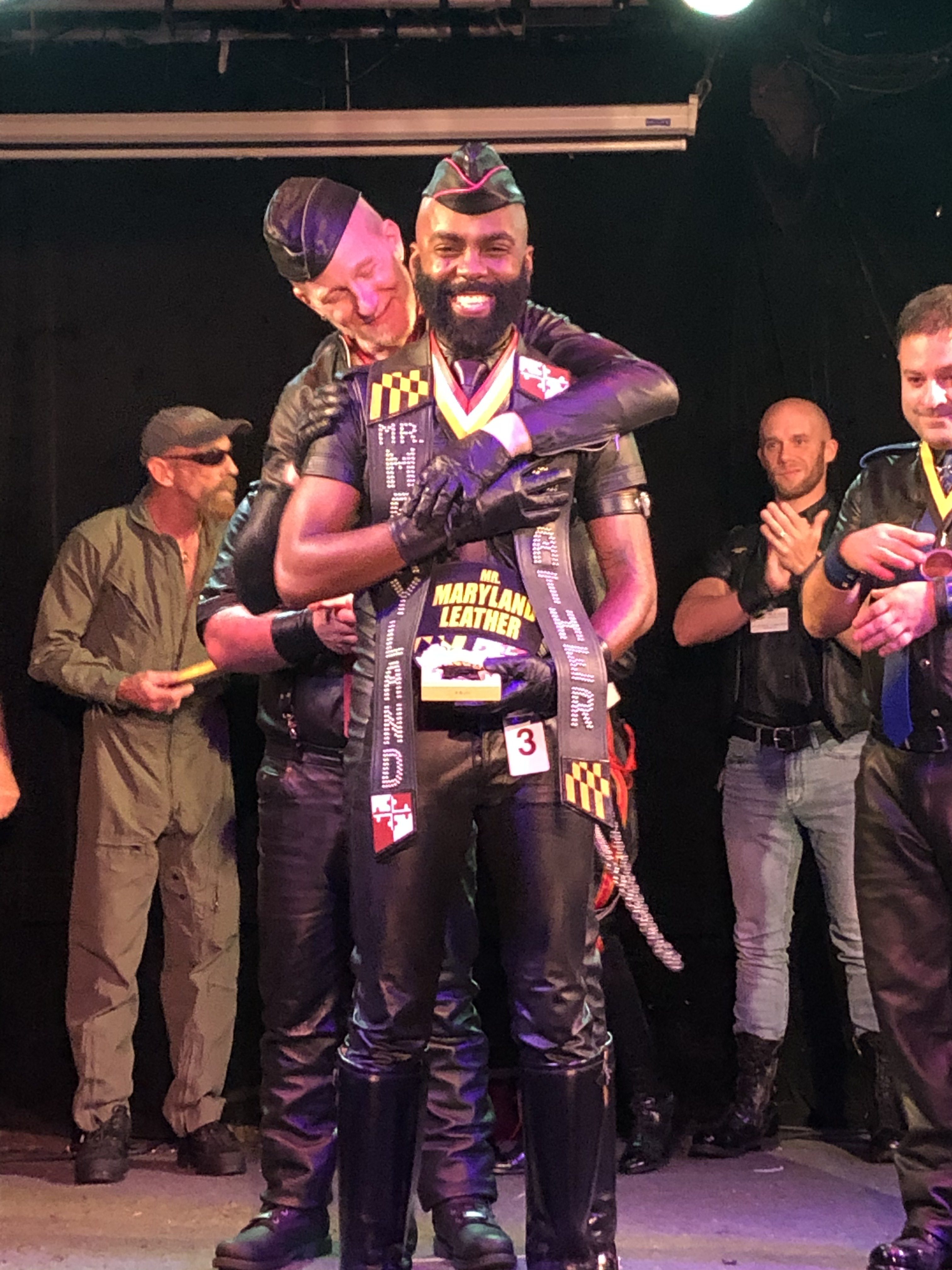 Oya Ra, a member of the Illuminati House of Ra, was selected Mr. Maryland Leather 2020 at a contest held on Saturday, November 2nd at the Ottobar in Baltimore. He was also awarded the David Allen Brotherhood Award. ShipMates of Baltimore club member David Sugar was first runner-up and Timmy Brehm from Nottingham, Maryland, was second runner-up. 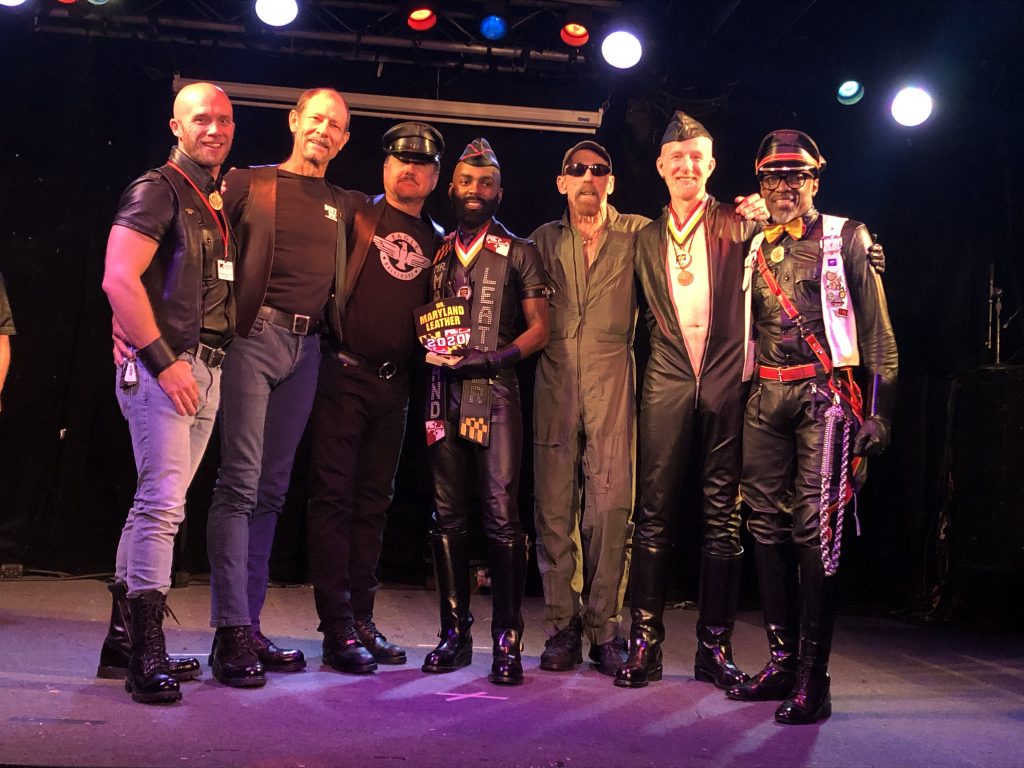 This was the 30th edition of the popular contest produced by COMMAND MC to select Maryland’s representative at the International Mr. Leather Contest held each May in Chicago. The event is also a fundraiser, and last year COMMAND MC donated over $10,000 to 14 charities in the Maryland area. Held as part of COMMAND MC’s Maryland Leather Weekend, the festivities started on Thursday, October 31st with a happy hour at Leon’s followed by a PigSty play party at Club 1722. On the evening of Friday, November 1st, cocktail parties were held at the Lord Baltimore Hotel hosted by the ShipMates Club of Baltimore, Red Lions of North Carolina, GNI Pocono Eagle, and a small group of Mr. Maryland Leather titleholders. Later in the evening the contestants and judges for the Mr. Maryland Leather 2020 contest were introduced. Judging MML 2020 were International Mr. Leather 2019 Jack Thompson, Mr. Maryland Leather 2018 Brendan Patrick, Mr. New Jersey Leather 2019 Lynx Onyx, American Leatherwoman 2017 Jackie Thompson, and Mr. DC Eagle 2019 Christopher Booth.

On Saturday, November 2nd the doors opened at noon at the Ottobar to give everyone time to socialize and peruse the large silent auction and shop the vendor Fruit Leather (Check them out on Facebook) prior to the 2 pm contest. The contest was emceed once again this year by the fabulous International Ms. Leather 2016 Lascivious Jane, who also performed. Jane is a kinky burlesque performer who also holds the title of Ms. Philadelphia Leather 2015. Last year she emceed and performed while very pregnant. At the 70th birthday party last weekend for beloved Baltimore leather community member Butch Lee, I got to see in person Jane’s adorable new member of the family. Jane always does an amazing job of not only bringing the razzle dazzle, but also performs the difficult task of keeping the contest moving.

Also working hard to keep the contest going were dan daddy Mr. North Carolina Triangle Leather 2018 Sir Brad Violand, stage manager Margaret Irene, sign language interpreter Debbie Jones, judge’s boy Pup Vanas, and tally masters North American Bear 2019 Kevin Barni and Mr. Delaware Cub 2019 Eric Cubby. (Prior to the contest, Eric surprised me with a shopping bag that contained the pin-covered ShipMate club vest of one of my club’s deceased members. He explained that he bought it at an auction in the Philadelphia area and wanted to return it to the club. I was deeply touched by this very kind gesture of true leather brotherhood.)

The contest began with the “Star-Spangled Banner” beautifully performed a capella by the Baltimore Men’s Chorus. Other performers included the queen of the Baltimore Flamingos rugby team, Sh’Lita Biscuit, and burlesque performer Bunny Vishus, who sang live and performed “When You’re Good to Mama.” Alexander D’Agostino performed a very creative “dance of a slaughtered steer.” The performance was both erotic and disturbing. Contestants appeared in barwear, jock, and formal leather and had an interview with the judges earlier in the day. They were also judged on a brief speech regarding their platform should they be awarded the title. The afternoon was filled with wonderful moments. During his step-down speech Mr. Maryland Leather 2019 Scorpius Red went way beyond the usual: “Thank you, thank you….” The audience applauded loudly for his comments regarding the ugliness that leather titleholders are forced to endure on social media and noted that the contest lost three additional contestants who dropped out because they didn’t want to have to deal with the drama in the community. He reminded the audience that “one does not have to be a titleholder to be an amplifier.”

After the contest a victory party for the new Mr. Maryland Leather was held at Leon’s with DJ Vince Christopher followed by another PigSty party back at the Lord Baltimore Hotel. Congratulations to Mr. Maryland Leather 2020 Oya Ra. Enjoy the ride. In the Maryland leather community, the new year has already begun.