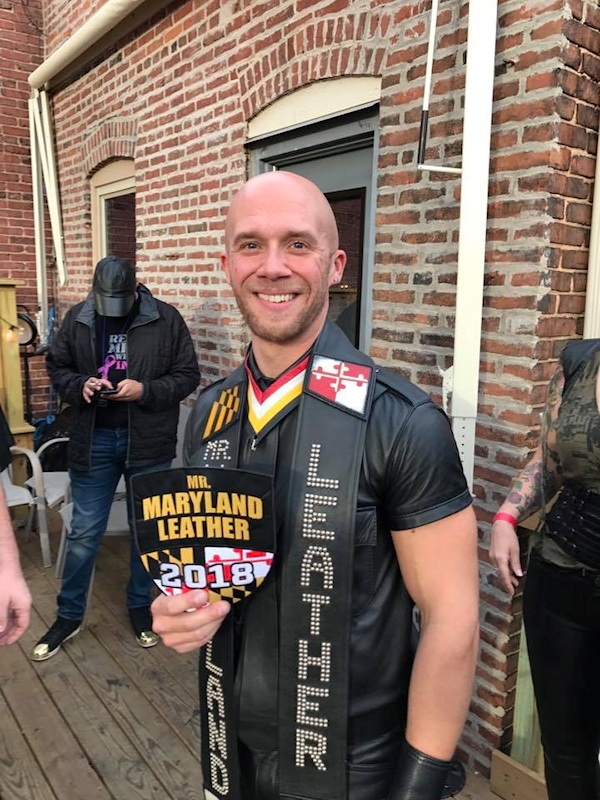 Brendan Patrick, a health-care professional and popular Baltimore Eagle bartender, was selected the 27th Mr. Maryland Leather titleholder on Saturday, November 4th at the annual Mr. Maryland Leather Contest produced by COMMAND MC at the Baltimore Eagle. First runner-up and also recipient of the Brotherhood Award was Daddy Rob Cwiklowski, a member of COMMAND MC, and 2nd runner-up was awarded to Jason Clark-Fox, a member of COMMAND MC. Also competing were COMMAND pledge Glenn Belcher and COMMAND pledge Samuel Goldstein. (It should be noted that a 6th contestant was introduced earlier in the weekend but that contestant did not advance to the onstage contest after the interview process.)

COMMAND’s annual leather weekend began on Friday, November 3rd with a 7 pm cocktail party at the Hotel Indigo sponsored by past Mr. Maryland Leather titleholders followed by an 8 pm cocktail hour sponsored by the ShipMates Club of Baltimore. A short bar crawl to Leon’s and a meet-and-greet party at Grand Central completed the evening. I was very pleased that COMMAND, whose home bar is the Baltimore Eagle, with many members working there, included other local LGBT watering holes in their weekend agenda. It is so important that we support our LGBT friendly establishments in these difficult times. The meet-and-greet at Grand Central was hosted by the Sisters of Perpetual Indulgence and included a brief onstage introduction of the six contestants by COMMAND MC vice president Christopher Council. This was one of the better organized Mr. Maryland Leather Contest in years right down to the fine details, like contestants wearing contestant numbers from the very start. This made it very easy for everyone to meet and greet the contestants.

I was also delighted when it was announced several months ago that this year’s Mr. Maryland Leather Contest would be emceed by International Ms. Leather 2016 Lascivious Jane. This Miss Philadelphia Leather titleholder and popular burlesque performer has been delighting audiences all over the country. She did a fantastic job as Mistress of Ceremonies (or, as she likes to call it, “femmecee“) and I hope that COMMAND doesn’t wait to sign her up for next year. There was also a great judging panel: Mr. Maryland Leather 2016 Eli Onyx, Mr. Michigan Leather 2017 Kenn Kennedy, Ms. Woods Leather 2017 Alyssa Durnien, Mr. New Jersey Leather 2017 Rich Farias, and Mr. Connecticut Leather 2017 Scooby. Mr. GNI Leather 2015 Dave Barnett served as den daddy and the job of judges’ boy went to Mid-Atlantic Drummerboy 2016 Pup Indigo. Also keeping the contest rolling along was tally master Paul Treadway and stage manager Margaret Irene.

Contestants were introduced onstage in barware (unscored) and had already been judged offstage during an interview with the judges which included points for community service. They competed onstage in jock/physique, formal leather image and gave a short speech. Olympic scoring that results in the highest and lowest judges’ scores being tossed was not used in this contest. There was also no onstage question. Contestants spoke on a variety of topics. Glenn Belcher who is a retired veteran who suffers from PTSD and was never without his faithful emotional support dog gave a very moving speech about his journey from not wanting to go out of the house to being onstage as a contestant for Mr. Maryland Leather and stated, “You don’t need to medicate in order to participate.” Rob spoke of the brotherhood of COMMAND MC and urged the audience to join adding, “I’m Daddy Rob and I’m here to recruit you.” Samuel and Jason both spoke of their personal discovery of the leather community and in another heartfelt speech Brendan told of his emotional struggle with alcohol addiction.

The contest also moved very quickly this year because there was not a lot of extra speeches or filler entertainment. Lascivious Jane told several short but very amusing antidotes about her parents attending leather events and only did one musical number. She brought down the house with her performance of Chicago’s “When You’re Good to Mama.” The only other entertainment was provided by local musician Eric D’Alessandro, who appeared onstage clad only in a jockstrap, which was auctioned off to a member of the audience with the proceeds going to Brother Help Thyself. The jock was removed onstage and Eric then proceed to play a beautiful and haunting version of “Somewhere Over the Rainbow” on his violin while nude. (That performance required lots of heart, brains, and nerve and the audience could easily see what he must have gotten from the wizard!)

After the contest, COMMAND hosted a dinner at The Nest above the Baltimore Eagle that featured roast beef, pork, and seafood and was quite delicious. A dance at the Baltimore Eagle and an after party at 1722 completed the evening. The Mr. Maryland Leather weekend concluded on Sunday morning with a brunch at Flavor in Mount Vernon.