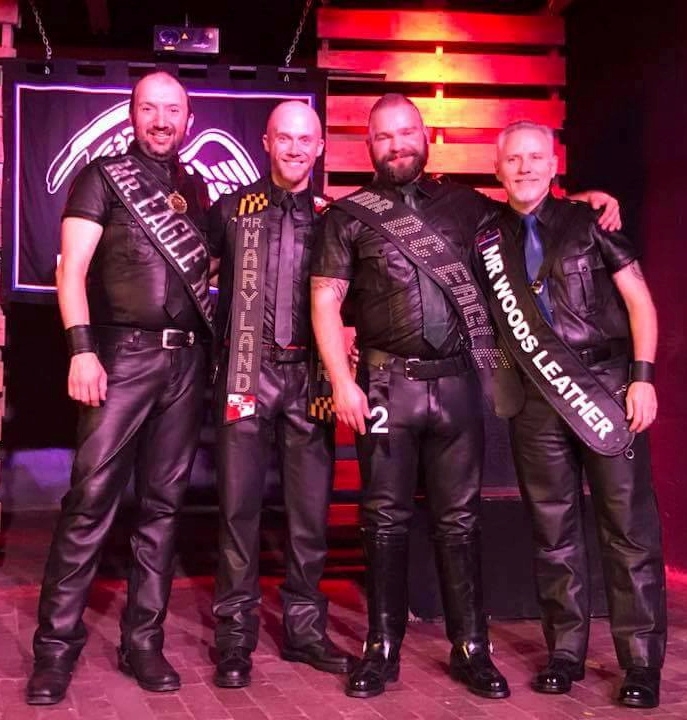 This was the fourth time the contest was held at the bar’s current location (at 3701 Benning Road NE) and I’m not really sure what the issue was this year. This is the longest running leather contest in the country and not only does the winner go on to represent the DC leather community at the International Mr. Leather Contest in Chicago in May, but two past Mr. DC Eagle titleholders have been awarded leather’s biggest title. Don’t get me wrong. It was still a good contest, but there were five contestants for DC Eagle 2017 and five for Mr. DC Eagle 2016. Why only two this year? Also the crowd appeared to be about one-third the size of last year. One couldn’t blame the weather, it was unseasonably mild. I must admit I was a little disappointed.

I am never disappointed in how quickly this contest moves along and emcee Dominion Onyx did an outstanding job keeping the contestants moving through the categories. The contestants had been interviewed earlier in the day by the judges (40% of total scores), and onstage appeared in barware (10%), physique/jock with a brief question based on information provided on the contestant’s application (15%), and appeared in formal leather while delivering a brief speech (35%). There was no filler entertainment between segments, so the contestants had to change quickly. Both contestants spoke passionately about becoming Mr. DC Eagle. Juaniorex described the DC Eagle as “a safe space that supports everyone” and Daniel started his speech with a question: “Why is it that you come to the DC Eagle?” and went on to describe how he discovered his people, found a community, and is now ready to give back.

There was also much passion is the step aside speech of Mr. DC Eagle 2017 Grey Owl. (I also most note that from now on when someone googles “work the stage,” Grey Owl’s picture should pop up.) Grey spoke of the importance of inclusion in the leather community and how events and play spaces should be assessable to everyone. (It was a little ironic that as he gave his wonderful speech there wasn’t an ASL interpreter on stage as there usually has been. I was aware of at least one deaf person in the audience and I’m sure there were more.) Grey also spoke about bullying and the role of social media noting: “Social media is ever so poisonous. Be above it. Don’t be the poison, be the antidote.”

Mr. DC Eagle 2018 wasted no time with his new title and help host a toy drive and fundraiser at the Atlanta Eagle over the Thanksgiving weekend and co-sponsored with Dominion Oynx and DC Leather Pride a Kink 101 event entitled “Beyond the Cheeks, Impact & Insertable Play” on December 7th at the Trick Box in Washington. I’m sure this is just the start of a very busy title year for DC’s newest leather titleholder. The Mr. DC Eagle 2018 contest was just the centerpiece of a weekend full of events to celebrate the 46th anniversary of DC’s famous leather bar. The popular Eagle Wings charity gear auction was held on Friday, November 17th and the Highway TNT hosted a victory dinner for the new Mr. DC Eagle on Sunday, November 19th. It is so wonderful to see that the traditions of the old DC Eagle bars continue at this location. There is a club bar complete with beer mugs for the various leather clubs so that everyone feels at home. (I have my ShipMate mug there!) There are two outside decks and lots of space in the 16,000-square-foot industrial building that once housed a slaughterhouse. The DC Eagle has that gritty feel of a true leather bar. Make plans to visit the DC Eagle soon. As Mr. DC Eagle 2018 Daniel T. Ferguson so exquisitely put it, the DC Eagle is a friendly home for the area’s leather community. I hope that the bar’s 47th year will bring many more wonderful memories. Congratulations to Mr. DC Eagle 2018