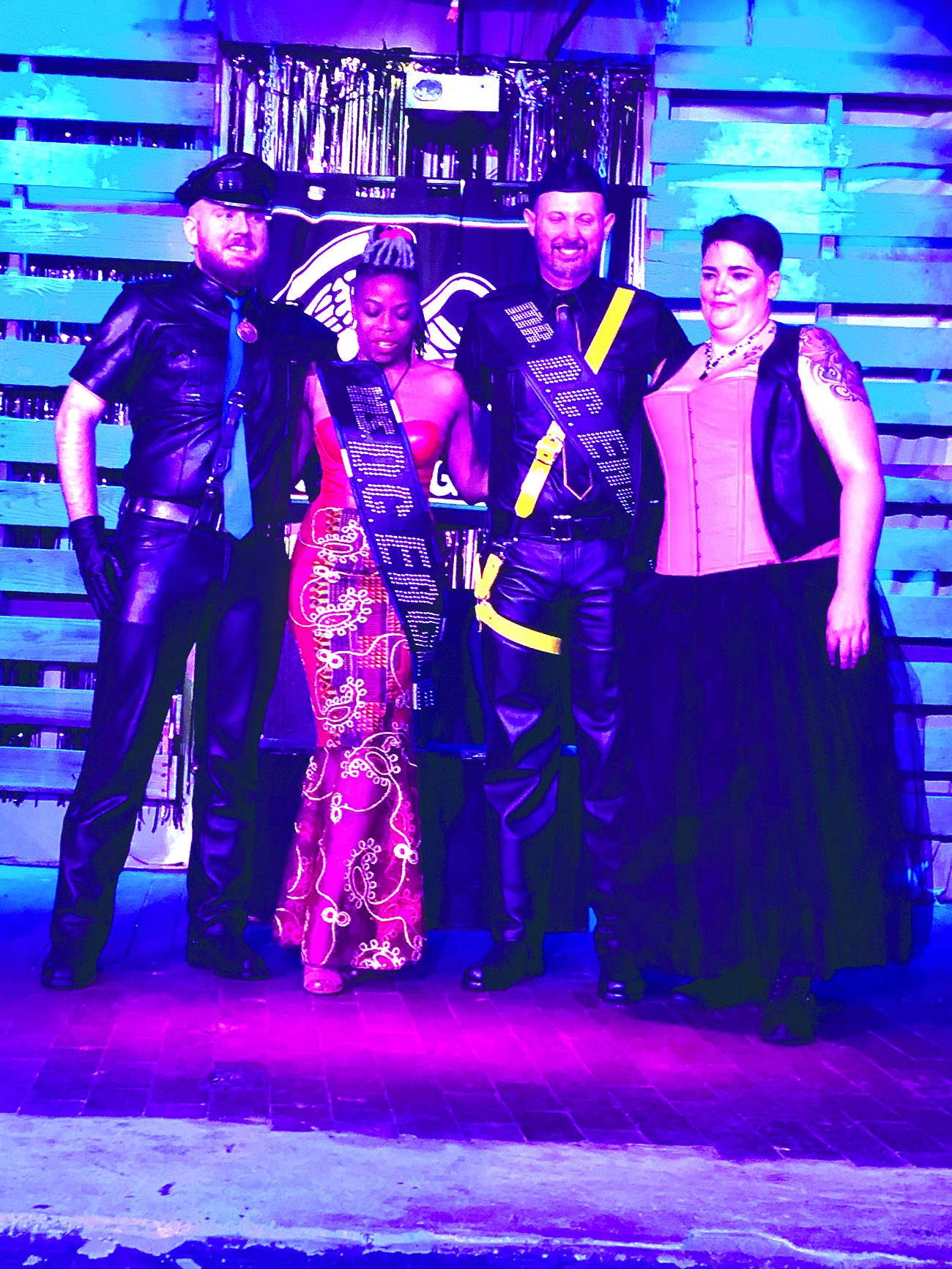 Justin Sawyers from Washington, DC, and a pledge of the DC boys of Leather club was sashed Mr. DC Eagle 2020 and Mx. Symphonee Sym, president of the Mid-Atlantic ONYX Pearls leather cub was sashed Ms. DC Eagle 2020 in a contest held on November 23rd at the DC Eagle bar. Also competing for the title of Mr. DC Eagle 2020 were first runner-up Tim Woody from Washington, DC, and a member of the Highwaymen TNT and Cody Puffe from Virginia Beach, Virginia, and a member of the Knight Hawks of Virginia leather club. There were plans to add a DC Eagle Bootblack title this year, but it appeared that no one stepped up to run. Hopefully that will change. 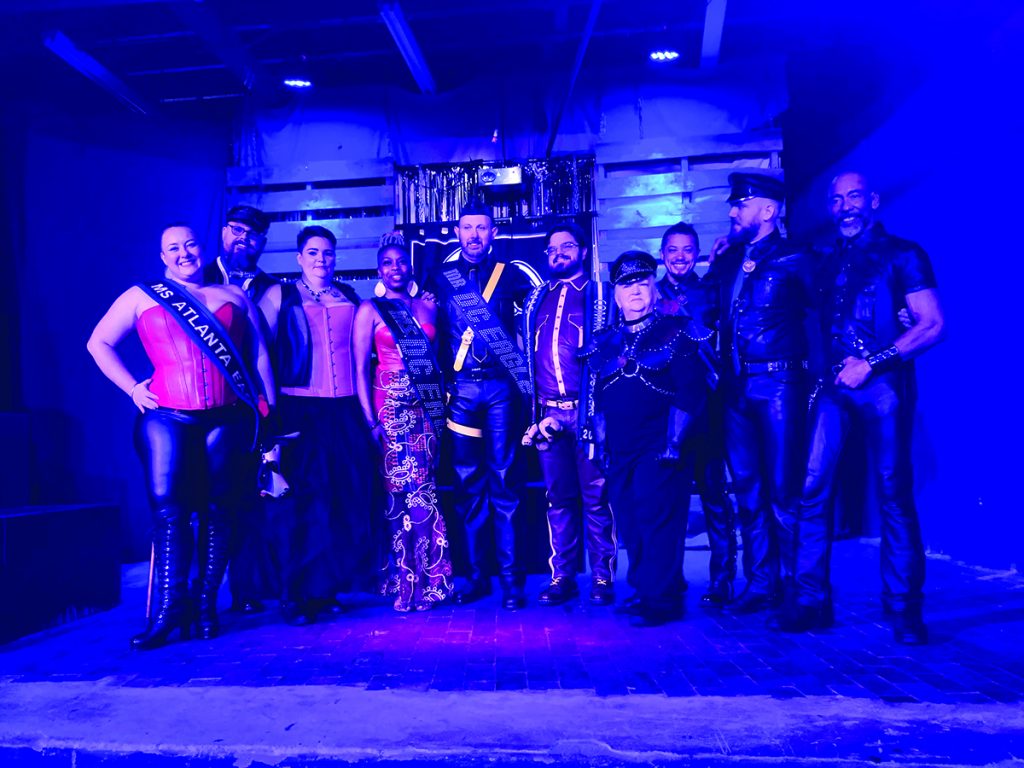 This popular leather contest, which is the oldest continuous leather contest in the country, was emceed by Mr. DC Eagle 2017 Grey Owl ONYX and was held as part of the bar’s 48th anniversary weekend. We arrived from Baltimore on Saturday evening after driving through torrential rain and were once again thankful that the DC Eagle has tons of free parking behind the shopping center next to the bar. The evening began with a live auction of leather gear and memorabilia. Auctioneer Jo Arnone was fantastic and kept the large auction moving along quickly assisted by Ms. Woods Leather 2020 Donna Marie, Mr. Woods Leather 2014 Jim Grandell Bennett, Ms. Baltimore Deaf Leather 2008 / 2009 Karen Taylor, and others. 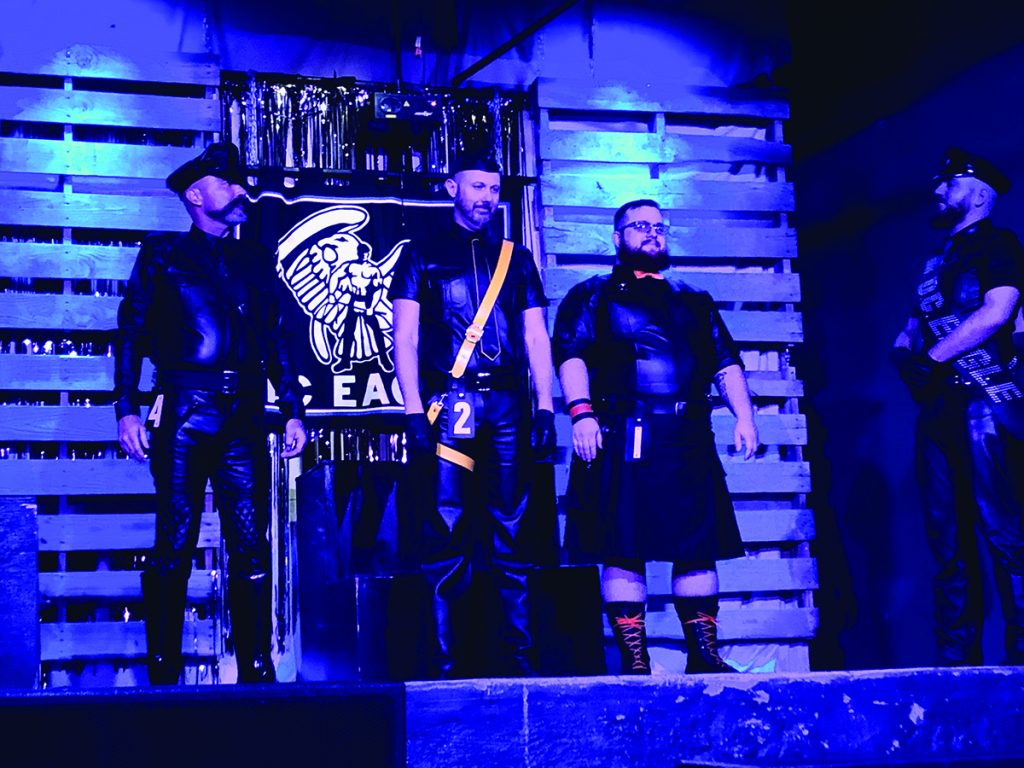 Contestants were scored earlier in the day during an interview with the judges and appeared on stage in barware, fetish wear, formal leather. They answered an onstage question and gave a brief speech. This quick-moving contest was filled with highs and lows. When one contestant was asked to select one of the judges and describe a date, he started by saying I don’t know who all the judges are. What? This is a basic rule of being a contestant. Learn everything you can about each judge. Most of the speeches were centered on one of two themes: safe spaces that are welcoming to everyone and the drama caused by online bullies. Unfortunately, these two issues are currently a big problem in our leather community. During the fantastic step-down speech by Mr. DC Eagle 2019, Chris also touched on people who hide behind computer screens and “go to social media to gaslight and be fucking destructive.” He had my favorite line of the night when he added, “If every porkchop was perfect we wouldn’t have hot dogs.” Ms. DC Eagle 2019 Alyssa Durnien, who had the job of being the first-ever Ms. DC Eagle titleholder, attended 88 leather events during her year and had the audience cheering loudly as she proclaimed, “This is my passion. This is the reason I get up every day.” She continued by saying that people who have a problem with diversity at events are the ones who should leave.

On the downside, almost every leather contest has a parade of colors during which a member of each leather club in attendance displays their club’s patch. Most leather contests also have a parade of current leather titleholders. It is a chance to applauded and recognize those current leather titleholders who have traveled to attend the event. These moments also make for good filler in the contest allowing contestants to change and get ready for the next segment of the contest. This contest had what had to be the first ever parade of colors / current leather titleholders combo where club representatives and leather titleholders scrambled across that stage in no particular order at record speed. This procession moved like a fast-forwarded conversation in a porn video. I found myself wishing once again that my dear friend Vern Stewart was sitting near me, as he was last year. I’m sure he would have had something very witty to say about this parade. Unfortunately, he passed away recently. The red wingback chair where he usually sat was left open and some members of the leather community placed flowers on it.

But overall it was another enjoyable DC Eagle contest and without lots of extra entertainment, gave those in attendance lots of time to relish the rest of the evening. Congratulations to Mr. DC Eagle 2020 Justin Sawyers and Ms. DC Eagle 2020 Symphonee Sym. Enjoy your title year. I hope you will make happy memories that will last a lifetime. The DC Eagle has been around for 48 years. Help this safe space and iconic leather bar write a new chapter and don’t allow the internet trolls to steal your joy!