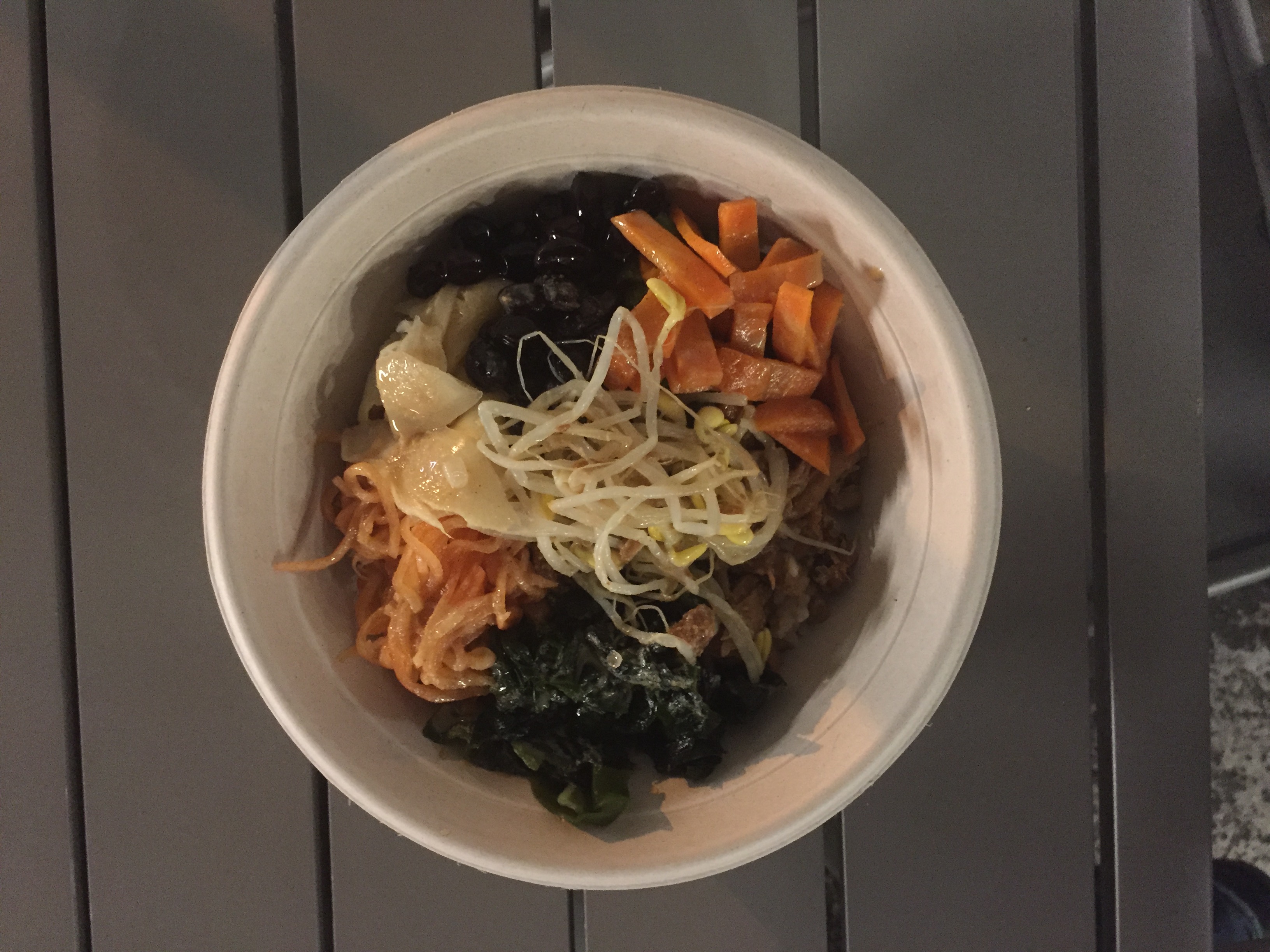 After spending some time at the fairly new Skybar, (located on the 19th floor of the Lord Baltimore Hotel – beautiful views I might add), we ventured over to the Mount Vernon Marketplace. According to its website, “Mount Vernon Marketplace offers the finest, freshly prepared artisanal foods right here in Baltimore’s historic Mount Vernon district.” There are over 14 food-and-drink vendors to select from, offering everything from gourmet cheese, artisan sandwiches, fresh local oysters and seafood to noodles and dumplings, French crepes, Ethiopian cuisine and coffee, vegetarian bean burgers, and much more!

With all of these options, it was very difficult to decide what to try. I landed on the Korean Grill called Brown Rice. With 20 years of culinary experience over three Baltimore locations, Chef Heather delivers one of the most popular dishes in Korean cuisine, Bibimbap (BEE-beem-bop). Bibimbap is a signature dish that translates to “mixed rice” in Korean. It is served as a bowl of warm rice or kale topped with namul (sautéed and seasoned vegetables). You pick your protein and sauce.

There are three bowl sizes to select from: Be Bowl (16 ounces), Super Bowl (32 ounces), and the Hot Stone Bowl (48 ounces). There are also five different grains to choose from: rices white, brown, multigrain, jasmine, or, if you prefer, barley. After choosing bowl size and grain, next up is choice of proteins. The Be Bowl will be one scoop, the Large Bowl will be two. The proteins are: chicken, pork, tofu, salmon, squid, shrimp, spicy pork belly, or kalbi. With the Be Bowl, five veggies are offered (seven with the Large Bowl), and these include: spinach, bean sprouts, shittake mushrooms, pickled radishes, carrots, broccoli, zucchini, grilled carrots, sautéed onions, green beans, pickled vegetables, tomatoes, corn, edamame, kale, or kimchi.

Having just come from the Skybar, I was in desperate need to eat something substantial to absorb the two drinks I had previously. I decided to go for the Be Bowl with white rice, chicken, carrots, seaweed, green beans, bean sprouts, ginger, soy beans, and pickled radishes. The person serving me recommended I combine the Bulgogi and Sesame Sauces, and I went along with this recommendation. I was quite happy with my meal, as the combination of chicken and vegetables, along with the sauces were very flavorsome, and filling. Honestly, if I had selected the Super Bowl, I do not think I could have finished, as the portion size of the Be Bowl was just right.

While I have featured only one of the dining spots within the Mount Vernon Marketplace, there are some many others to try. If you’re not in the mood for a meal, Taps Fill Station offers 30 taps of North American wines, small production ciders, meads, kombuchas, oils & vinegars, and a craft beer program that rotates every three months by state around the Mid-Atlantic Region. And not to be outdone, for those with a sweet tooth, there is Edible Favors by Denise, featuring signature ice-cream, cupcakes, cookies, and bread! I’m sure the next time I am in the neighborhood, I will come by the Mount Vernon Marketplace and try something new, and I am sure you will, too!