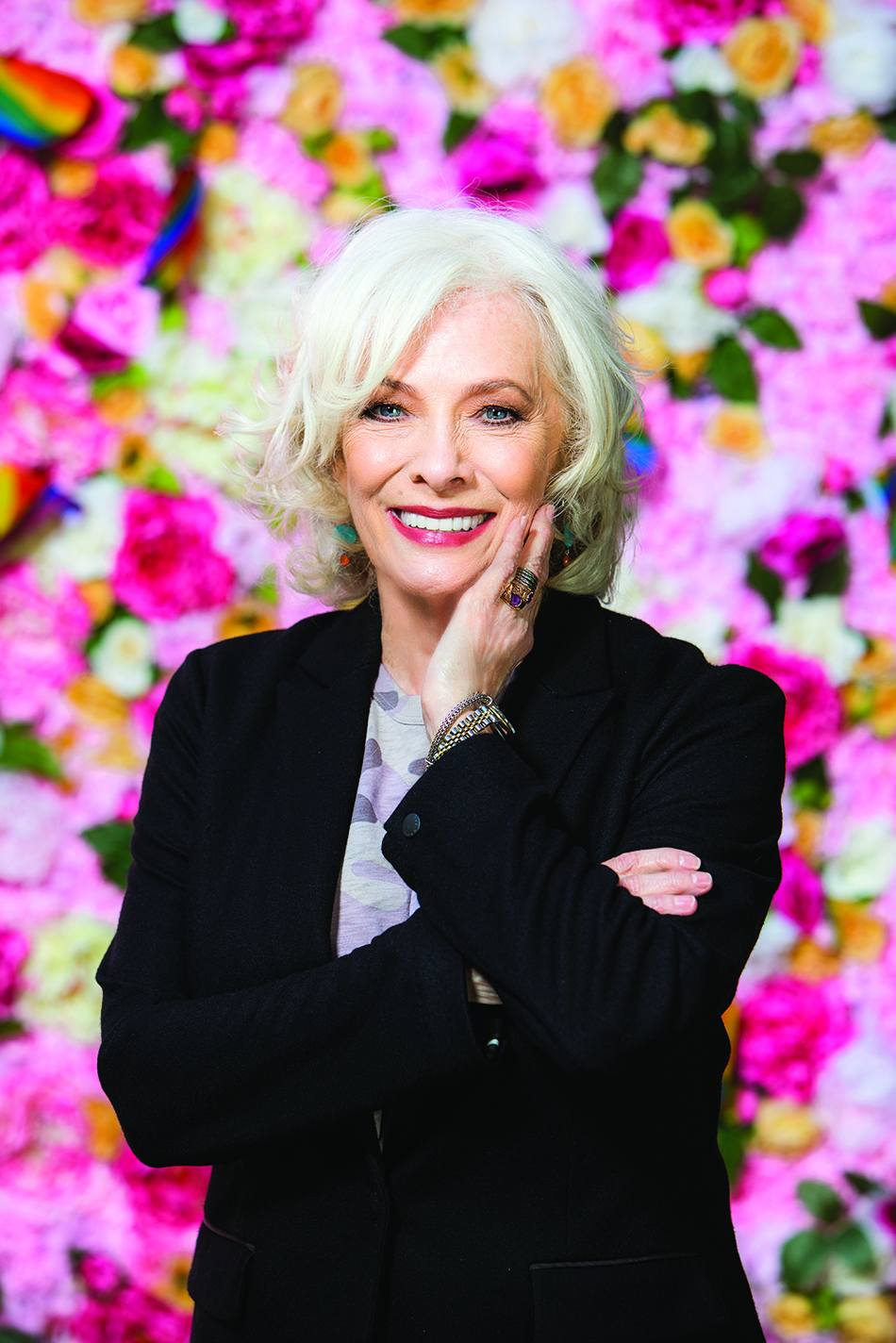 In the hierarchy of divas, few would disagree that Betty Buckley ranks close to the top. From her Tony Award-winning star turn in the Broadway musical Cats and her recent run in the national tour of the revival of Hello, Dolly, to the countless other musicals in which she’s performed including 1776, The Mystery of Edwin Drood, Triumph of Love, and Sunset Boulevard. Not limited to the stage, Buckley has been acting on the big and small screen alike for more than 40 years, beginning with her portrayal of compassionate gym teacher Miss Collins in the Sissy Spacek version of Carrie. Buckley is also renowned for her live performances and her most recent albums, Story Songs and Hope, do a marvelous job of capturing that energy. I’m grateful to Betty for taking the time to speak with me in early 2020.

Gregg Shapiro: I’d like to begin by saying that I love everything about your 2017 and 2018 live albums Story Songs and Hope, respectively, beginning with the song selection, which included tunes by Radiohead, Steely Dan, Peter Gabriel, Joni Mitchell, Emmylou Harris, J.D. Souther, Mary Chapin Carpenter, Rosanne Cash, and T-Bone Burnett, among others. Would you say that that is an accurate representation of your musical taste?

Betty Buckley: Yes, a lot of it. I love beautiful story songs wherever I find them, in whatever genre. My musical taste is very eclectic. From singer/songwriters, both contemporary and from the 60s, 70s, 80s. That spectrum of writers that you listed are some of my favorites. But I also love jazz and jazz instrumentalists, which is why I work with jazz musicians. They have a wide musical palette and they’re capable of helping me interpret the stories I want to tell with beautiful dissonance and beautiful colors in the chords that they use. I love good stories or songs that have a character, someone that I can play as an actress in situations that can be defined in a musical setting.

As expected, you also performed an array of songs from musical theatre, including a few by the current generation of Broadway songwriters, including Joe Iconis and Jason Robert Brown. When I interviewed Jason in late 2018, he said that having you as a champion of his music was “thrilling and unexpected.” What is it about Brown’s music that appeals to you?

He’s one of our best! I recently did three concerts with him at Subculture in New York with some new material, for me, and one or two pieces that he’s written for me for those concerts. I’ll be adding those into my new repertoire, as well. He’s one of my favorite writers in that he writes character and story songs so beautifully. The language he uses, lyrically, is so vivid. He creates the scenes for the character to live in.

Another cover you performed was “Falling in Love” by Lisa Loeb, who, like you, is from Dallas / Fort Worth. Did that have anything with why you chose it?

No. I’ve just been a fan of her work for a really long time. We share a sound man. I was able to access some songs of hers via our mutual love for this sound man Terry. It’s been really interesting [laughs], through the many years that we both worked with him, our concerts don’t fall on the same day so we both get to have access to him. I met her through Terry and then discovered that she was from Dallas. That song, “Falling in Love,” I think is one of her best songs. I recorded it years ago and then brought it back in recent history. It’s such a great story song.

Jerry Herman passed away in late December 2019. Would you please say a few words about singing his songs when you played Dolly Levi in the 2018 / 2019 national tour of Hello, Dolly?

It was a remarkable gift of a job, a wonderful blessing to be able to do that great show in that remarkable production directed by Jerry Zaks and produced by Scott Rudin. It was really a joy. I had previously done Jerry Herman’s play Dear World, directed by Gillian Lynne, in London several years ago. I have done two Jerry Herman shows. It was an honor to be invited to sing at his memorial on February 3rd. I’m excited to be a part of that and to celebrate his incredible life. I met him, when I was very young, about a possible project. I don’t remember what it was or what happened with it. He invited me to his apartment in New York City and gave me a beautiful lunch. It was my only one-on-one encounter with him, but I’ll never forget that. When my friends called me to invite me to be a part of this memorial service, they said that Jerry requested that I sing for him there. It’s a real honor.

Your work in theatre has no doubt garnered you a large following in the LGBTQ community. What does that following mean to you?

There’s nothing like an audience of the LGBTQ community. They’re the most supportive, the most loving. They have such tender hearts and are ready to go with you on an emotional journey. That’s what I do. I’ll never forget the first time I performed “Meadowlark” from The Baker’s Wife for a huge audience that was largely gay at the Brooklyn Academy of Music. I was discovering my interpretation of that song and people went crazy. I was like, “Oh, my God!” Through the love and appreciation of this community I’ve found myself as an artist. I’ll be forever grateful for that.

In the ten years that has passed since you released your country-oriented Bootleg: Boardmixes from the Road country music has only grown in popularity. Is there any possibility of a new album in that vein from you, perhaps one featuring the new breed of female country singer/songwriters such as Brandi Carlile, Kacey Musgraves, Miranda Lambert, and Brandy Clark?

What a brilliant idea! Thank you [laughs]! It’s a great idea.

Since first playing Abby on Eight is Enough more than 40 years ago, you have been regularly acting on TV, in shows such as Oz, Preacher, and Supergirl. What’s the best part of working in television?

It’s fast [laughs]. I’ve really been blessed to be able to do Supergirl a few times, and prior to that Pretty Little Liars. It’s a joy! They’re such sweet people. I love that. The showrunner has literally written a role for me and it’s very gratifying.

You have acted in two M. Night Shyamalan movies – The Happening and Split. What do you like best about working with Night?

He’s an incredible person. He’s a beautiful radiant being and he’s filled with wit and mischief and humor and joy. He works with the same group of people in Philadelphia where he shoots his films. It’s like a family environment. He’s been a great patron of mine. He likes my work and I love him. It’s just a pleasure. I hope he keeps hiring me. Split was one of the biggest international box office hits of 2017.

Finally, if the subject isn’t off-limits, would you mind sharing some of your thoughts on the Cats movie?

I was happy to be at the premiere in New York City last month. It was great to see Andrew (Lloyd Webber) again. Basically, it was a time period of remembrances of the original team, which was one of the greatest joys of my life. To work with Trevor Nunn and Andrew and the great Gillian Lynne. That great job opportunity to play Grizabella who has been such a teacher and friend and soulmate for all these years, and to have that song, “Memory” be one of my signature songs is an incredible thing in my life. It was joyous to be there. The movie itself, I really enjoyed some of the performances tremendously. The girl who played the white cat Victoria – Francesca Hayward. And Robbie Fairchild, who played Munkustrap, was wonderful. Of course, Judi Dench and Ian McKellan, I’d watch them read a phone book. It was incredible to see them. My friend Paco Delgado, who designed Split, was the costume designer, so it was a wonderful reunion with him. I really liked Taylor Swift’s new song; I think she did a great job. And I thought Jennifer Hudson did a kickass version of “Memory.” I think that some of the CGI would have been better rethought. There are moments of the movie, such as Skimbleshanks, the railway cat’s number they do on the train tracks, was great. It certainly has its highs [laughs].