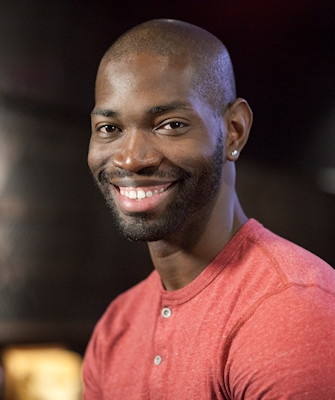 An interview with Tarell McCraney

It’s no exaggeration to say that you haven’t seen anything like Moonlight). Written and directed by Miami-native Barry Jenkins, Moonlight is based on a short play by gay playwright and Miami-native Tarell McCraney. Presented in three separate chapters, Moonlight tells the heartrending story of Chiron, as a child, a teen, and an adult, growing up in Miami’s Liberty City neighborhood. The three actors – Alex Hibbert, Ashton Sanders, and Trevante Rhodes – are exceptional, and the supporting cast, including Mahershala Ali (drug kingpin Juan), Janelle Monae (Juan’s girlfriend Teresa), Naomie Harris (Chiron’s mother Paula), and André Holland (the adult Kevin, the great love of Chiron’s life), are all outstanding. That sound you hear? That’s the well-deserved Oscar buzz about Moonlight. I spoke with Tarell McCraney about the movie at the Standard in Miami Beach in October 2016.

Gregg Shapiro: I want to begin by congratulating you on the reception that Moonlight has received. What does the favorable response to the movie mean to you?

TM: Thank you, first of all. I don’t think any of us expected the response we’re getting, to be honest.

TM: Well, a lot of this has been a passion project. I wrote the original script as something that was more of a personal exploration. I think (director) Barry (Jenkins) got involved because he could personally see himself there and wanted to tell a story about Liberty City. We kind of didn’t think past just doing that. I think what’s been great is that people are responding to that personal passion. All of the other stuff is great, too [big smile]. What’s been exciting is that people have said, “Follow your passion.” Clearly, it resonates with other people.

GS: Can you please say something about the process of adapting your short play In Moonlight Black Boys Look Blue for the feature-length movie Moonlight?

TM: The process was probably a little different than most people have come to understand how adaptations work. The original piece that was sent to Barry was a script that I had been playing with since about 2003. The version he got was one that I was trying to figure out whether I could turn it into a limited series or something. I was trying to figure out where it was going to go. We were both working with a group called the Borscht Film Festival here in Miami. They’ve been based in Wynwood; mostly underground and indie films and shorts. I sent them Moonlight because I graduated from New World School of the Arts (in Miami) with a few of the people. They asked me if I had anything. It was a little longer than they could use, so they put it away. Then they were working with Barry on a short called Chlorophyll, which he was making here at the time. They didn’t introduce us, per se, but they did put the Moonlight script in Barry’s hands. He looked at it and thought he could do something with it. I gave him permission to do it.

GS: Was there back and forth collaboration on the actual screenplay?

TM: Not really, in terms of a lot of back and forth. He did send me the script when he finished it. Actually, there was no time. Once he actually started working on it, it was fairly swift. He had captured so much of the original piece. I had to go back and reread the original, and I was like, “Oh, yeah, there’s so much of it in there.”

GS: I’m glad you mentioned Barry. As a playwright, you have worked with a variety of directors, gay and straight. Barry also happens to be straight. What was it like working with him on Moonlight?

TM: We work with the straights often [laughs]. We have to work with them. I think one of the things that were important to Barry right away was to preserve the voice of the piece. I think the piece is so specifically about queer identity. He respected that and wanted to keep that there. In that sense, there was never any conversation about diminishing or amplifying it in any stereotypical way. We just wanted it to exist. Also, it’s a funny story, because I think most people want to characterize it as a story about a man living on the down-low, which is actually not what the piece is about. It’s about a guy who only wants to be with one person. It’s kind of a true love story.

GS: Absolutely; his one true love! It’s not a down-low story at all.

TM: He’s (Chiron) never with anyone else and I think it’s different when you say that someone is living a lie and you say they are going and doing other things. But he wasn’t. That’s the powerful thing about it. It’s one of the things Barry wanted to preserve, and so did I.

GS: Most of Moonlight is set in Miami. As a Miami native, what can you tell me about the significance of the setting?

TM: I think the significance of the setting is that it’s a Miami that we rarely get to see. What we usually see is the powdered beaches and jiggly things in bikinis, both male and female. I think one of the important things about it, is that we show that there is immense beauty to the city, as well as immense poverty and other urban issues that major cities have. In that way, I think Miami can begin to connect with other cities in a way that it normally doesn’t. Most people come here and they think we don’t have the kind of urban problems that other cities have, and we absolutely do. We can’t begin to solve them until we see who we really are. That was important to me.

GS: The scene on the beach between teenage Chiron and Kevin takes intimacy to a whole new level. Please say something about that scene.

TM: Again, it’s one of the scenes where Barry really preserved the nature of it from the original and left it there, allowing the actors to take it to where it really needed to go. What I love about this process is that everyone came to the table wanting to be as true and authentic to the moment as possible. I think it paid off in that way. Barry didn’t shirk the responsibility; he wanted it to be as beautiful as it needed to be. Remember, we have to hold that in our heart for another decade. That is a defining moment of his (Chiron’s) life and it is extraordinarily beautiful. What I appreciated about what he (Barry) did, and what I respect him for, is that he trusted the words that had been written.

GS: How much, if any, of Tarell is in Chiron?

TM: A lot. Except for when he becomes a drug dealer [laughs].

TM: A lot of the piece is based on a lot of events in my life. I think a lot of the ways in which I operated in the world, from being very shy and not being able to say a lot, are very close.

GS: In addition to the extraordinary performances by the three actors who play Chiron, Moonlight features breathtaking performances from Mahershala Ali, Naomie Harris, and André Holland, as well as Janelle Monae’s radiant acting debut. Please share your thoughts about the cast.

TM: I can’t say enough about this cast. I love them like family. And I know they get tired of me – I’m always like, “Hey! How are you?” I send them random texts and I hit them up on Instagram, “Guys! Thanks so much!” From Alex Hibbert and Jaden Piner, who are from Miami and in school right now, they’re not here with us (at the media event) because they’re in class. They’re extraordinary and I love them so much because they remind me so much of me, growing up in this neighborhood, in this community. Mahershala is so generous with his time and gave himself to this role. Naomie, who didn’t have a lot of time on-set, but she worked so hard to get it done. André is one of my closest friends, so it’s a little disingenuous to say I love André. I mean, I do love André, and I think he’s one of the best actors of our generation, but don’t tell him I said that [laughs].

TM: Not really no [laughs]; because this piece was so difficult for me to find a format for. Barry’s a consummate filmmaker. When he came to the script, he was able to find a language to make the words on the page work. I struggled with it because it’s not my wheelhouse. It’s like if I choreographed a ballet. I could do it, but it wouldn’t be as great as if you had asked Justin Peck to do it. Unless someone wants to come along and make them into a movie [laughs], I’m like, “They’re good the way they are.”

GS: Are there any new plays or productions on the horizon?

TM: Not that I’ve written. My play, Head of Passes, is going to Los Angeles in the summer of 2017, starring Phylicia Rashad. Other than that, I’m teaching my students (at University of Miami).