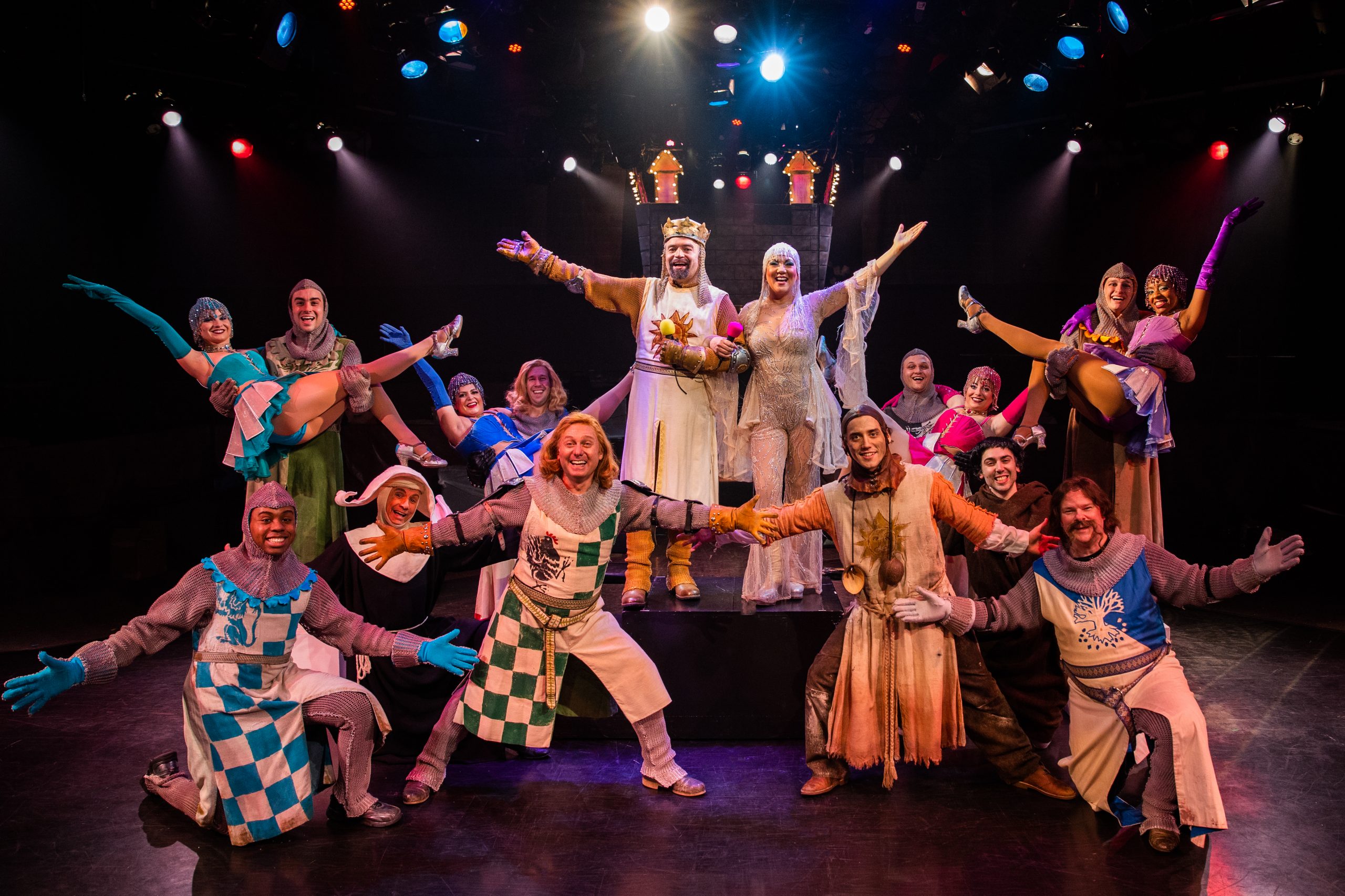 In 1975, British comedy troupe Monty Python hit the big screen for the second time — the first film was basically a collection of their TV sketches — with the original film Monty Python and the Holy Grail. The film lovingly and hilariously skewered the legend of King Arthur and it was a hit, and has accrued new fans ever since its release. In 2005, a musical adaptation of the film titled Spamlot opened on Broadway, with a book by Pythonite Eric Idle, and it too was a hit, earning 14 Tony Award nominations, and garnering three awards including Best Musical. The show retained much of the film’s storyline but made some adjustments for the live theatre experience. The original Broadway production ran for 1,575 performances and was seen by more than two million people. The show has also toured the country twice, and Toby’s Dinner Theatre mounted a production in 2014.

Toby’s kicks of 2022 with a new production of Monty Python’s Spamalot with a few of the original cast members either reprising their roles or taking on new ones. The story is the same: King Arthur travels the land in search for knights to join his round table, occasionally having to explain that he’s the King of the Britons, and who exactly the Britons are — them. Arthur travels through a village riddled with the plague where he meets Lancelot and Robin who are disposing of a not quite yet dead body (that sings and dances), then comes upon an old lady, erm, young man named Dennis — who doesn’t believe in the monarchy — and Arthur explains how the Lady of the Lake gave him the sword Excalibur and bestowed the title of King upon him. Arthur has to prove his story and summons the Lady and her Laker girls, and Dennis is convinced after she turns him into Sir Galahad. Sir Bedevere joins the group as does Sir Not-Appearing-In-This-Show (who apologizes and promptly exits), and they head to Camelot. And anything that happens in Camelot, stays in Camelot. God then contacts Arthur and sends him and his knights on a quest for the Holy Grail — with many jokes about how the all-knowing God could have misplaced a cup — and they set off, encountering everything from rude French soldiers, a dark and very expensive forest, the Knights Who Say Ni, a Black Knight, and a bunny. Arthur is also tasked with finding a shrubbery and putting on a Broadway show … but will they ever find that Grail?

If you’re familiar with Monty Python and the Holy Grail, you will find much in Spamalot that is familiar. There are also some tweaks to the story (the whole bridge troll scene is gone) but in this case it does not detract at all. I get really irked when a movie I like is turned into a show and then the show completely changes key points, but Spamalot remains mostly faithful to the film. The show is also full of irreverent humor that borders on the offensive (the French, a number that is a commentary on the tradition of Jews in the theatre, and a throwaway punchline about the newly out Lancelot), but Monty Python was always pushing the envelope. If you’re easily offended, then consider seeing another show. It’s just a very, very funny, absurd exercise in musical comedy.

On our press night, the show had suffered some unfortunate absences of cast members for various reasons (Joey Ellinghaus as Patsy, Alan Hoffman as King Arthur), but the outstanding Toby’s ensemble stepped up and never missed a beat. Shawn Kettering, who normally plays five parts, stepped into Arthur’s shoes and was excellent. He was commanding in the role, with a booming voice, but he also showed Arthur’s weariness as the situations and his inept knights spiraled out of control around him. Quadry Brown took over the role of Patsy, and expertly clopped those coconut shells together to mimic a horses hooves, but he also got a chance to show off his voice in the show’s signature song ‘Always Look On the Bright Side of Life’ and again in Arthur’s ‘solo’, ‘I’m All Alone’. Both actors did great jobs with short notice to fill the roles.

Many of the Toby’s regulars appear in this production in multiple roles including David James, Jeffrey Shankle, Justin Calhoun, MaryKate Brouillet and Shane Lowry, and they and the others of the ensemble are put through their paces in this show. It really is a ‘hectic’ show (in a good way) with a lot of moving pieces and players coming and going from all angles, so they all get gold stars for keeping up the pace, never missing a beat, singing, dancing and always with an exuberant smile.

One cast member returning to Toby’s after many years away is Adam Grabau in the roles of Sir Lancelot, The French Taunter, King Ni and Tim the Enchanter. Grabau toured with the national production of Monty Python’s Spamalot for four years so he knows the show like the back of his hand, and he was fabulous. Each character had a distinct personality, but the French Taunter was my favorite with a particularly memorable visual joke that had me almost rolling off my chair with laughter. A great performance. Also turning in a great performance is Janine Sunday as the Lady of the Lake. Sunday has some gorgeous costumes, a stunning and powerful voice, and great comic timing. She also gets another of the show’s most well-known songs in Act II, ‘The Diva’s Lament’, where the character figuratively tears down that fourth wall and complains about being off stage for the first half of the second act. It’s a brilliant number and she gives a bravura performance.

For such a fast-paced show that relies on verbal and visual jokes, director and choreographer Mark Minnick has to keep a lot of plates spinning and he makes it look so easy as characters enter and exit from four different locations around the stage area, with props moving in and out, and large groups of people singing and dancing without bumping into each other. I am always amazed by the skills Minnick employs to keep these in-the-round shows moving smoothly, and he put this cast and crew through their paces. All that work has paid off. In these times when we need pure entertainment and laughter, Minnick, his cast and crew have completely delivered.

The set design and set pieces that glide on and off stage courtesy of David A. Hopkins is top notch. The costumes designed by Tom Hatley and coordinated by Marianne VanStee & Janine Sunday are amazing, Broadway quality. I was totally blown away by the detail and the King Ni costume in particular was a standout … probably because it’s so tall. Some of the costumes are so elaborate that you almost don’t realize the actor in one was just on stage as a completely different character. Just some stellar work here. And speaking of stellar, Lynn Joslin’s lighting design is gorgeous. It took me back to the beautiful lighting for The Little Mermaid with the use of color and appropriate, never too bright lighting. Just some really lovely work. For those who are sensitive to such things, be warned that there are several uses of strobe effects and fog and haze.

Over all, this is one of the most entertaining, funny, enthralling, captivating, and enjoyable shows I’ve seen in a long time. If you’re into this type of absurd humor, this is a show you will not want to miss.

And don’t forget about the food, which is always good but this meal was … *chef’s kiss*. Everything from the buttery corn, the colorful roasted potatoes, the mac and cheese and baked tilapia was delicious. My mouth is watering just thinking about the meal. There is also beef stew, roasted BBQ chicken and the carving board, and of course the signature Spinach Phunque. A wide variety of food to satisfy any craving. And, as with each show, the signature drink is also available. Spamalot‘s drink is called ‘The Bright Side’ and it is a frozen Strawberry Daiquiri Piña Colada topped with whipped cream and sprinkles, available in adult and non-alcoholic versions. And you get to keep the glass!

If you need to have a night out with your significant other or a group of friends you haven’t seen in a while, you can’t find a better entertainment than Monty Python’s Spamalot at Toby’s Dinner Theatre in Columbia, MD. Great food and a great show add up to a great night out. Note that some of the humor is a bit risque, so think twice before bringing younger children.