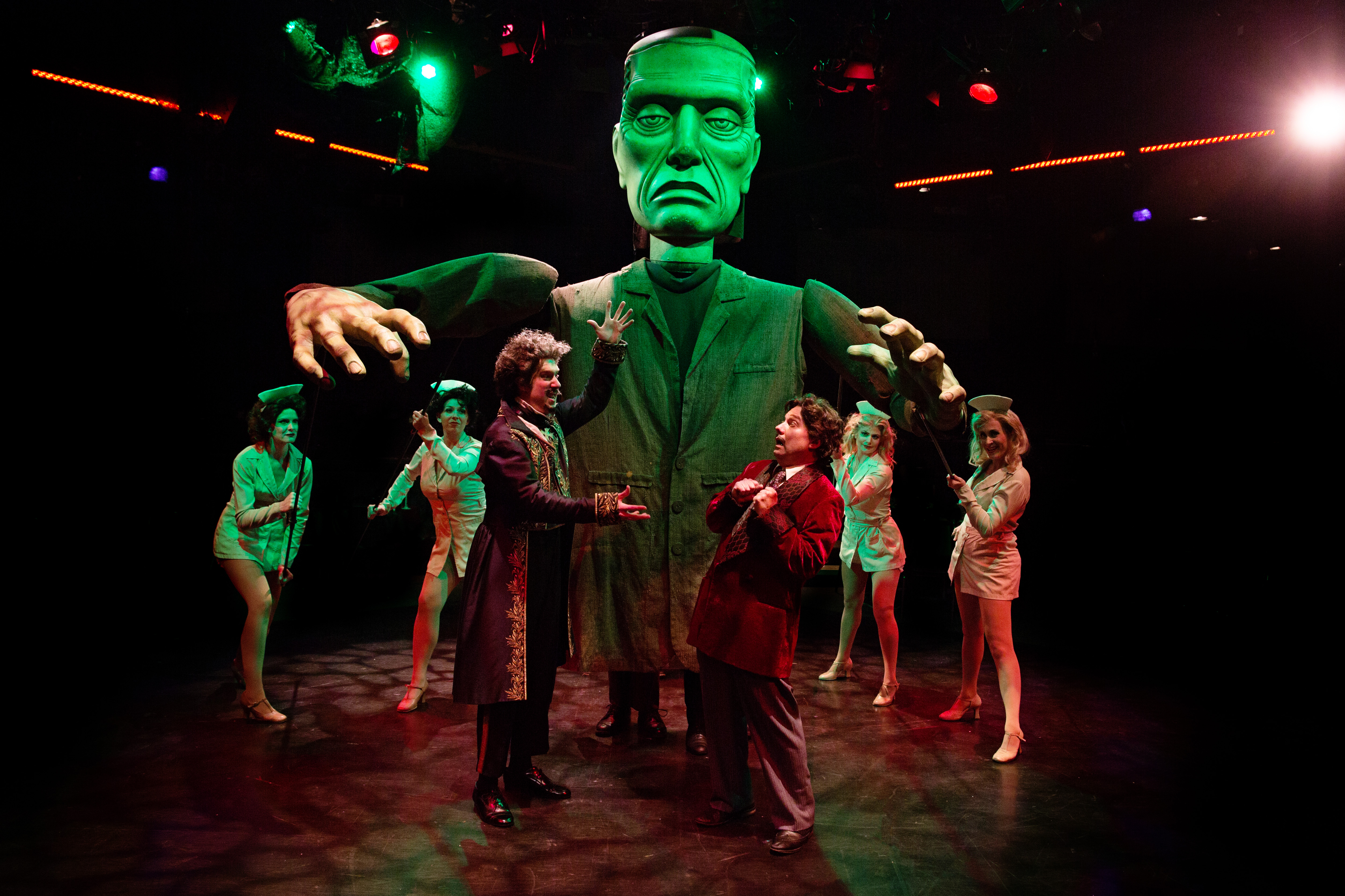 I’ve been attending the shows at Toby’s Dinner Theatre for a year now, and while they are always of the highest quality, the subject matter of the majority of them often comes with more drama than the lightheartedness one usually associates with a musical. Well, that situation has been rectified with the current production of Young Frankenstein, bringing a breath of fresh air to Toby’s stage.

For those not in the know, Young Frankenstein is based on the classic comedy film by Mel Brooks, and actually became Brooks’s second Broadway musical after the huge success of The Producers, also adapted from a Brooks film. Unfortunately, Young Frankenstein did not enjoy the same success as The Producers and closed after 484 performances (which featured a star-studded cast including Roger Bart, Megan Mullally, and Andrea Martin). The Producers ran for just over 2,500 performances. Having seen the musical for the first time now, I have to wonder why it didn’t strike a chord with Broadway theatregoers.

The show follows the movie pretty much by the numbers, and it’s not really necessary to have seen the movie to enjoy the show. The plot is a comedic riff on the classic Frankenstein story – Victor Frankenstein dies and the villagers of Transylvania are thrilled because there isn’t anyone left to make more monsters. Except … Frederick Frankenstein (or as he prefers Fronkensteen). But he lives in New York so no one believes they have to worry. But they do when Freddie gets a telegram telling him that unless he comes to Transylvania, he will lose everything that was his uncle’s. Leaving his literally untouchable fiancé Elizabeth behind, Frederick makes the trip, meets Igor (or Eyegore) and Inga and Frau Blücher, discovers his uncle’s experiments with reviving dead tissue (Frederick is a brain specialist), and is enticed into getting into the family business, much to the chagrin of the villagers. Things get even more complicated when Freddie falls for Inga and Elizabeth unexpectedly shows up. And then the monster escapes, leading to a frantic search before the villagers get to him first.

I haven’t laughed this hard at a show in a long time (probably the national tour of Something Rotten was the last full-fledged musical comedy that tickled my funny bone), but Young Frankenstein is absolutely hilarious (and bawdy), retaining pretty much all of the jokes from Brooks’ screenplay (from which he co-adapted the book of the musical with Thomas Meehan). But even a funny script can be a dud with poor delivery and that is something that no one needs to worry about with this production as the actors give it their all with perfect comic timing. Jeffrey Shankle (Frederick) and David James (Igor) have worked together at Toby’s in a variety of shows, but this is the first time I’ve seen them perform so closely together. These guys are like a legendary comedy team, like Abbott & Costello or Martin & Lewis. They play off each other perfectly, delivering Brooks’s dialog perfectly and chewing the scenery when appropriate, honoring the film performances of Gene Wilder and Marty Feldman but also making the roles their own.

Alicia Osborn (Elizabeth), Louisa Tringali (Inga), and Tess Rohan (Frau Blücher) are also terrific, each of them getting their own big moment in the show. Christopher Kabara is an imposing figure as The Monster, but he plays both menacing and hapless perfectly. The supporting cast, many of whom are Toby’s regulars, deserve heaps of credit. Many work as waiters prior to the show and then have to hit the stage as a collection of different characters. Our waiter for the evening, Justin Calhoun, went through about eight costume changes during the first act and played everyone from a villager to the ghost of Victor Frankenstein (and he has a powerful voice). The main cast gets most of the accolades because they are the center of the show, but all of the supporting actors are what holds it all together, the unsung heroes of these productions.

Of course none of this would be possible without a director and choreographer, and here Mark Minnick pulls double duty (and if you know of the impossibly tight rehearsal schedule, you’d appreciate even more what you see on stage). It’s always a challenge staging a show in the round, positioning the actors so that everyone in the audience can see them. Minnick has to keep the action moving, or rather the actors, so that no section of the audience is left just watching everyone’s backs. Not only that, but with a large ensemble, he also has to work out the choreography to fit the space. I marveled at one point as everyone was criss-crossing the stage during a big number without bumping into one another. It is pure joy to watch all these moving parts come together. And I have to tell you, the hayride scene is one of the funniest things I’ve seen in a long time. It’s hilarious in its simplicity.

This show also has a seven-piece orchestra that sounds like a million bucks even though they’re tucked away in a room above the stage. They do an amazing job. This show also requires some extensive and elaborate costumes, and I have to say they are some of the best I’ve seen on the Toby’s stage as are the makeup, wigs, and facial hair. The show also has some impressive set pieces, including the laboratory and some wonderful lighting and special effects. Everyone involved with Young Frankenstein is at the top of their game. And don’t forget, this is dinner theatre and the dinner buffet is outstanding with some new items like meatloaf and butter chicken, bowtie pasta and vegetable medlies (there’s also a brunch buffet for the daytime performances). Each show also has a specialty drink, and this one features the Abby Normal, a fruity, frozen concoction that you can even turn into an adult beverage if you so wish. The name, of course, comes from a key plot point in the show and it’s topped with a tiny gummy brain. I wasn’t sure if I was going to like this one as it was said to be a melon flavor but it was delicious, tasting more like a frozen margarita than a melon. Overall, everything was delicious.

If you’ve still got the post-holiday blues or are looking for a distraction from the cold weather or other worldy goings-on, consider an evening at Toby’s Dinner Theatre in Columbia, Maryland, for a delicious meal and the funniest show you’ll see this year (and that’s saying a lot considering it’s just January)! t