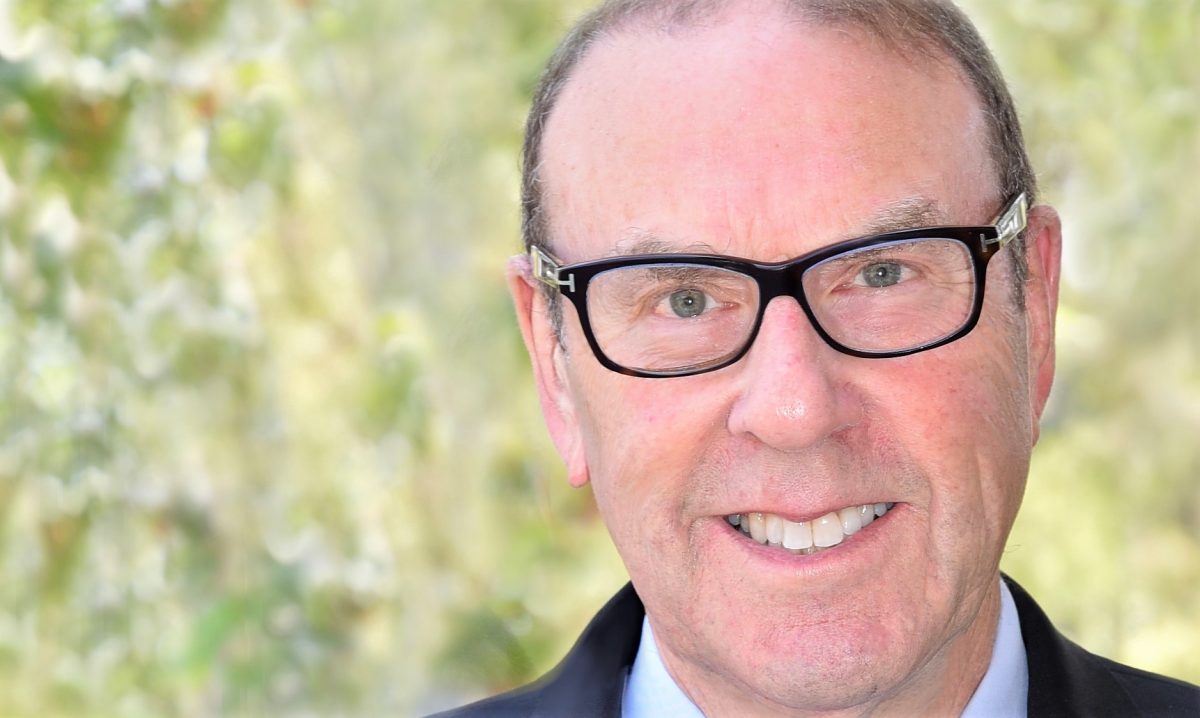 This June 5, 2021 marks 40 years since the famous report in a CDC publication, the Morbidity and Mortality Weekly Report (MMWR), in which Dr. Michael Gottlieb outlined the troublesome cases of five gay men dealing with pneumonia and skin cancers. It is widely considered the “start” of scientific acknowledgement of the emerging AIDS crisis – before it even had a name – and the first writing about it in a scientific or governmental publication. The peculiar new cases were already on the radar of other clinicians who served gay men, of course, including the writings of New York physician Dr. Lawrence Mass in The New York Native.

In a surprisingly candid interview, I spoke with Dr. Gottlieb about the legacy of his famous CDC article and his views of the epidemic since. The renowned physician (and my primary care doctor during those murderous years) let it rip about everything from the false facts of HIV history, ACT UP, AmFAR and Matilda Krim, and even some of the personal history we share. 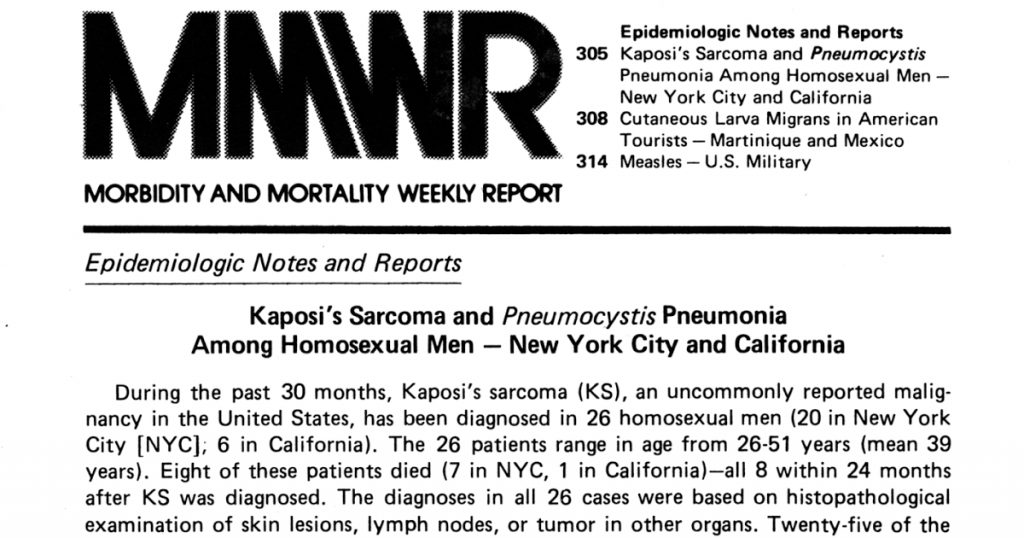 Here is our conversation, gently edited for length and clarity.

Mark S. King:  Thank you for doing this. It’s been some years since we’ve spoken.

Michael Gottlieb, MD:  How young are you now?

So, when I first met you, you must have been…

I remember your red hair.

It wasn’t quite ginger.

It was bright orange.

I’ve been re-reading your MMWR article, and it feels a little spooky reading it again. It’s like the first few paragraphs of a horror story, except you know where it’s going.

We didn’t know where it was going at the time. For all we knew it could have been like an outbreak of salmonella from sushi.  We didn’t have any idea of the extent.

And yet, it’s striking how much that MMWR report gets right, in terms of its suspicions. Sexual activity is mentioned, the fact that something is affecting the immune system. There is so much that it got right.

I’ve heard that before. (laughs)

Did you know any of those five men in the MMWR story?

I knew all of them! The first three patients are mine, the fourth was found by a health officer, and the fifth patient I think came from Cedars. I can tell you quite a bit about them. I remember these patients in more detail than patients I saw last week. They were so striking. Their stories were so similar and sad. Previously healthy people who were suddenly falling apart.

You know, the date of that report, June 5, is now commemorated as National Long Term HIV/AIDS Survivors Day.

Really? I didn’t know that. Long-term survivors owe their survivorship in part to their own fortitude, to their will to endure, but also to the advent of effective medicine.

You crop up in all sorts of chronicles. And the Band Played On, your work with AmFAR, etc. Are there stories that get told about what happened that are not really accurate?

I’m sure there are. And the Band Played On unfairly stigmatized Gaeten Dugas (a gay flight attendant who was inaccurately portrayed as “Patient Zero.”). And Randy (the journalist who wrote And the Band Played On) said I was denied tenure at UCLA three times. That’s not correct. I came up for early tenure, I pushed them for it, and they rejected that. They rejected it again at 8 years, which is “8 or out.” I was in my thirties, and didn’t kiss enough ass, I wasn’t appropriately deferential, and didn’t exactly stay in my lane. And I got politically active, and I was a star. Academic medicine doesn’t ascribe to the star system. You’re a star internally if you bring in a lot of money. But if you’re a star in the press and on television, just trying to do a good job, trying to keep the public informed, it’s not the same. The (UCLA) administration  said “don’t do that.” And I was Rock Hudson’s physician.

We have that degree of separation. I had an affair with him.

Were you one of the ones that got a letter (from Rock Hudson’s attorney) about his diagnosis?

No. It never occurred to me to blame him for my diagnosis when he went public.

Because of his status, he said “well, someone is going to sue me.” And eventually, (his partner at the time) Marc Christian did sue him.

Right. I would see Marc out on the scene in L.A. quite a lot. So when he blamed Hudson for potentially exposing him, I kinda raised my eyebrow.

I do want to dispel one other thing that’s out there.

Another boogeyman out there was Ronald Reagan. He came into office in 1981, and AIDS doesn’t register on his radar. He had bigger fish to fry, like Gorbachev. And much to his discredit, it took him seven years to say the word AIDS. Reagan didn’t lead. He didn’t say AIDS was an emerging public health threat, He didn’t demand more funding. Lives would have been saved if he had done more. Reagan is seen as the evil guy, There’s got to be someone to blame. The fact of the matter is, the virus is what’s to blame. This devastating new virus we knew nothing about. A lot of lives were lost before anyone could have done anything. This is in no way to let Reagan off the hook, but he wasn’t “the” villain. There were many. He was not the only one. There was a whole cadre of haters, like Lyndon Larouche and Jesse Helms.

One more thing. There’s one movie, called The Fight for AmFAR, that was produced by (AmFAR co-founder) Matilda Krim’s friends. I think Calvin Klein produced it. And in it, there is a bold-faced lie. (In the film) Matilda says, “And then when Rock Hudson happened, I thought to call Elizabeth Taylor and got her involved.”  And people said to me at dinner parties, “now wait a minute. You were involved with Elizabeth Taylor long before that.” Elizabeth Taylor was the recipient of the first Commitment to Life award at APLA.

Yes. Yes.  I was there for that event.

I was there for that, too! Elizabeth Taylor was deeply involved before any contact she had with Matilda Krim. Matilda Krim, on camera, in a piece orchestrated by her people, says this ridiculous thing, that she personally enlisted the help of Elizabeth Taylor. That’s all.

Do you have any thoughts on the recent passing of (noted gay NYC doctor, researcher and AmFAR co-founder) Dr. Joseph Sonnaband?

Oh, I knew Joe!  God bless him. He tried and tried and tried. He was a deeply compassionate and committed man. His faith was a little misdirected, scientifically, but no one could doubt his compassion.

Joe was part of this fascinating early debate between those who thought AIDS was a “single agent,” probably a virus, and those who believed in “multi-factorialism,” meaning, AIDS was the result of many factors at once. Joe was on the side of multi-factorialism, even for a while after HIV was identified as “the single agent,” and some charge that this attitude influenced AIDS denialism.

I would say that, scientifically, in the early years, there were more crackpots in New York than any other place. Multifactorialism emanated from New York, and was always ludicrous. But Joe Sonnabend was a good soul.

And your thoughts on How to Survive a Plague?

I think it’s fair to say that those in-your-face activists catalyzed something. No one should underestimate the role that ACT UP played as a mover. Moving the agenda forward. They deserve a lot of credit.

I always felt kind of deficient during that time because I wasn’t like them. I was living in Los Angeles — you were my doctor during a lot of that time — and I was working for LA Shanti, where we helped people die with dignity. We trained care providers. And I guess I always felt like I wasn’t a “real activist” because I wasn’t wearing Doc Martens and storming the NIH.

Everyone was an activist in their own way. They just didn’t throw their bodies in the street. But if things hadn’t started to change for the better in the early 1990s, I was close to joining ACT UP myself.

I was so frustrated at the first Bush administration and the lack of progress. Their ability to ignore the epidemic because of who was affected. Something had to be done. In the Randy Shilts book (And the Band Played On), there’s a conversation between Marcus Conant and myself. We feared that in the future people would fault us for not having done more. By that I meant, that we hadn’t emitted some kind of primal scream from whatever podium we had, to wake people up to what kind of genocide was happened.

My recollection about you and your reputation is that you were a care provider and you were never targeted in the way that the governmental types were.

I have a personal story for you. My older gay brother’s partner during the 1980s, Emil Matzner, was your patient. He brought me with him for an appointment he had with you. You walk into the exam room, and Emil says, “Michael, this is my brother-in-law Mark, and he’s positive, and you’re going to take him on as a patient. Oh, and Mark has insurance but it’s not great, so I want your office to take him for insurance only. He doesn’t have any money.” And I remember you looking back and forth between us, as if to say, “Well, Emil, who would you like me to examine?”

Emil was a wheeler dealer. He was also Jewish, so we connected right there. I was also struck by your youth, Mark. And you were so “up.” You weren’t, like, “oh my God I’m going to die.” I remember the two of you together quite vividly. I don’t remember his death.

He died in 1989. I was summoned to their home the night he died, just after he died. And this will make perfect sense to you, Dr. Gottlieb: Emil orchestrated his death. When he decided that that day was the day, he ordered his favorite bottle of scotch, and he drank it with a whole bunch of Seconal.

Yeah. It was very hard on my brother. It was hard for him to respect Emil’s wishes, to control the time and manner of his death. He’s fine now. But it was such a desperate time, then. I remember taking (the experimental drug) Compound Q through an IV in hotel rooms, and going to the Louise Hay Rides, and having crystals put on my chest for healing.

I have some of those crystals. A patient gave them to me. I’m going to turn them over to the AIDS archives at University of California San Francisco.

This has been great, Dr. Gottlieb.  Thanks. I’m sure I’ll run into you at some damn conference, and I look forward to that.