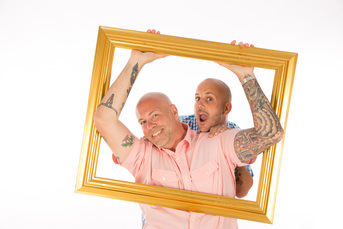 This coming month, the Miss Gay Maryland America pageant, the preliminary to Miss Gay America 2019, will take place on April 14th at the Horseshoe Casino. To highlight its 33rd year, the owners of the Miss Gay America pageant, Michael Dutzer and Rob Mansman recently chatted with Baltimore OUTloud to discuss their relationship and the importance of the pageantry in our culture.

Frankie Kujawa: Could you provide a little bit of background on yourselves for our readers?

Michael Dutzer: I grew up in Northeast Pennsylvania. In 1990, I had a marketing job and attended school in the Philadelphia area when an opportunity to move to the Maryland / Washington, DC-area for work came up. I’ve called Maryland home since. Rob was raised in upstate New York and Richmond, Virgina He is a pediatric dentist and loves helping people. He was the chief of pediatric dentistry for the army at Walter Reed Medical Center and stationed at Fort Meade. He remained in Maryland after retiring. After he retired from the Army, he had the opportunity to buy the dental office he was working at part-time. He also has two beautiful daughters from a previous relationship.

Could you tell our readers how you both met, and a bit about your relationship? How long have you been together?

Rob and I met online back in 2009, and we then met for coffee at a Panera Bread in Hanover, Maryland. We both hit it off and had a great time getting to know each other. We then started dating pretty much immediately. In 2011, we got married in Washington, DC. As for our relationship, we are both very active and driven people. After we got married, we purchased a dental office in Frederick, Maryland, and have been expanding and investing in businesses since. We have a pediatric dental office, an orthodontic office, Mad Angel Entertainment (which is the parent company of the Miss Gay America Pageant and the Mr. Gay America Contest). We also partner in a national balloon company, an online directory and event company for parents, and this year we partnered with our friend David on a Hamburger Mary’s in St. Louis. So, I’d say we are pretty powerful together as we both contribute different skills and ideas to our relationship and businesses. Other than work we enjoy traveling, art, and theater.

How did you both become affiliated with the Miss Gay America Pageant? What are your different roles?

I started doing drag a few years ago and Rob was very supportive. We met a lot of people in the Baltimore and Western Maryland areas through drag and our network of friends grew. We were introduced to the Miss Gay America pageant by our friend Sue Nami, who we sponsored for the pageant that year. After that we became state promoters for the Maryland US of A pageant and loved working with the entertainers and contestants. We were interested in obtaining the Maryland America pageant but that did not work out, but they offered us the national pageant. At the time, we were just opening our orthodontic office and needed to focus on that. We had heard that the pageant had sold and we were at our home in Florida waiting on the announcement to see who would be taking the America system, when our friend Ben told us that the sale fell through and that we should consider buying it. We called our friend Aron up and talked to him about it since he was close to the current owners. Everyone was on board and four days later we owned Miss Gay America.

I work daily now producing the pageant and organizing contracts and events. We both are involved in the day-to-day decisions and handling issues. We are very hands-on and enjoy going to preliminaries and getting to know contestants and promoters.

In your opinion, why do you think the pageantry and titles are so important in our culture?

I think everyone looks for validation. There are awards in so many fields of work that validate who we are and what we do. I think pageants help people grow personally by helping them improve as performers, and in the community by working with people and helping charities raise money. It also provides direction and goals for some people. The pageant has been around since 1972 and we are trying to keep it relevant and keep it a desirable title for drag entertainers to work for.

It can sometimes be difficult working with someone who is your partner both at home and in your career. How do you balance home life and work?It is difficult at times. We work in all of our business together and we travel together. Rob has two daughters who we both spend time with. When we work, we have discussions and sometime arguments over decisions, but that’s business. You have to leave it in the office, which is hard when you are working with six companies. It’s hard not to work day and night, but we enjoy what we do. We make time for each other and work through the hard times, but that also makes us stronger as a couple. t

I was very excited to finally be going to the Capital Grille, as I’d heard about it from so many people. On this night, it was the special occasion of my mother-in-law’s birthday. Once our small party had gathered, we were quickly seated towards the back of the main dining area. Our first encounter with the wait staff was truly remarkable, as they presented my mother-in-law with a birthday card, some birthday confetti scattered on the table, and a very sincere wish of happiness. This would set the tone for the remainder of our time there.

As most of us sipped on our cocktails (of course I had a Cosmopolitan, as I do enjoy a pink drink), we soaked in the ambiance of the room. Lined throughout the dining room are beautiful portraits of famous people from local history, among them, Clara Barton and Johnny Unitas. Nearby our table were two oil paintings of horses. I decided they were Man-O-War and Secretariat, but they are likely not. As the dining room was quite crowded, the noise level did come close to overwhelming. Sipping on the Cosmo and people-watching kept me distracted from all of the loud talking around me.

Our server for the evening, Jackie, was absolutely amazing. She was very attentive, friendly, and had a wonderful sense of humor. Jackie shared with us the specials for the evening, but I was determined to stick to one of the staples from their menu, the Dry Aged New York Strip Steak (14 ounces for $47). As an appetizer, I selected a cup of the White Cheddar Potato & Leek Soup ($9). Before our appetizers were served, we did enjoy the basket of various breads, all served fresh, and all were delicious with a dab of butter. I was careful not to fill up on too much bread before the appetizers were served. The soup was served warm, and took me back 12 years to when I was spending lots of time in England. It was not only delicious but also brought back enjoyable memories.

Along with our main courses, we selected four items from the sides menu: Lobster Mac-n-Cheese ($18), Parmesan Truffle Fries ($11), French Beans with Heirloom Tomatoes ($11), and the Sautéed Spinach with Garlic Confit ($11). I had sampled three of the four, as I’m not a fan of lobster. All were served in ample portions for the five of us. My favorite by far was the Sautéed Spinach – the combination of the fresh spinach and whole garlic was delightful. I had requested the New York Strip to be served medium-rare, and that’s exactly how it was prepared. Honestly, I don’t know how I finished a 14-ounce steak in one seating, but slowly and steadily, I managed to be the only person at our table without a take-home bag.

As one would imagine, the Capital Grille offers a wonderful fine-dining experience from the moment of entry to the very end. Along with the experience comes a great selection of menu options no matter what you might be wishing for at the time. Of course there are various cuts of steak, but there are options of lamb, seafood, and chicken as well. We all had a very memorable experience, and most importantly, we were able to celebrate a milestone birthday with my mother-in-law. I believe by the time we left, she felt truly special. I look forward to going back there for future occasions, trying a different combination of cocktail and steak next time.