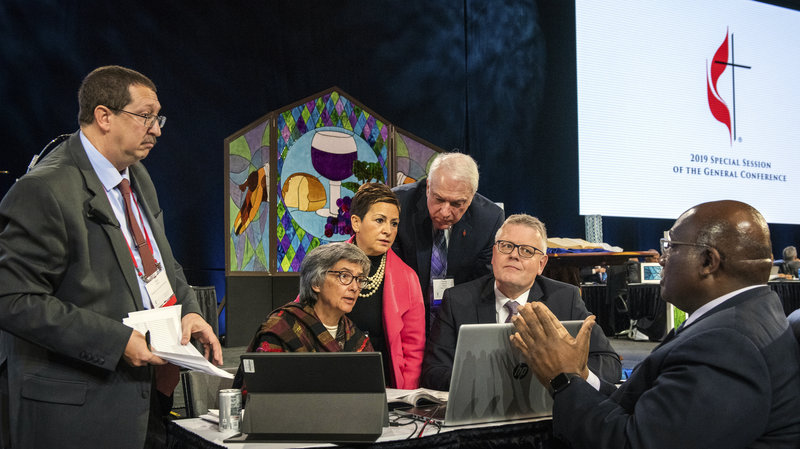 Saint Louis – The United Methodist Church has voted to continue its prohibition on LGBTQ weddings and ministers during a special meeting of the general conference in St. Louis last month. The delegation of more than 800 clergy and laity from multiple countries voted 438 to 384 to approve the “Traditional Plan.” The TP faced hours of delay as opponents of the plan made moves to stall the voting process or make the proposal unable to be voted on. Another plan that aimed to be inclusive of the LGBTQ community was defeated on multiple accounts during general conference proceedings. The “One Church Plan” would have allowed churches to decide individually on celebrating same-sex marriages and the inclusion of openly-LGBTQ people in ministry. This plan was supported by a majority of bishops. Council of Bishops President Kenneth H. Carter said that bishops will have a heavy task of outreach ahead. “We are going to do a lot of outreach to progressives to say, ‘We see you,’” Carter said.

A Dallas / Fort Worth-area UMC pastor said this week he believes the work for inclusion will continue in the Dallas area. “Most of the Methodist leaders I know are in shock,” said the Rev. Eric Folkerth, head pastor at the Woods UMC in Grand Prairie, formerly pastor of Northaven UMC in Dallas. “They believed there was a legitimate chance for a positive change at this general conference and instead the [Traditional Plan] was passed.”

The Traditional Plan still faces an uphill battle to become church law, as many believe it is not in line with the church’s constitution. “It should be said that it is almost certainly to be struck down by the Judicial Council,” Folkerth said. “But we cannot look past the fact that roughly 55 percent of delegates voted in favor of [it], and that is incredibly shocking and depressing to me.” The delegates approved the motion by a vote of 405-395. Also, the delegates voted on legislation to allow churches to disaffiliate from the UMC and retain their property. That petition passed. (Dallas Voice – Nick Totin at Dallasvoice.com/umc-upholds-ban-on-lgbtq-inclusion)