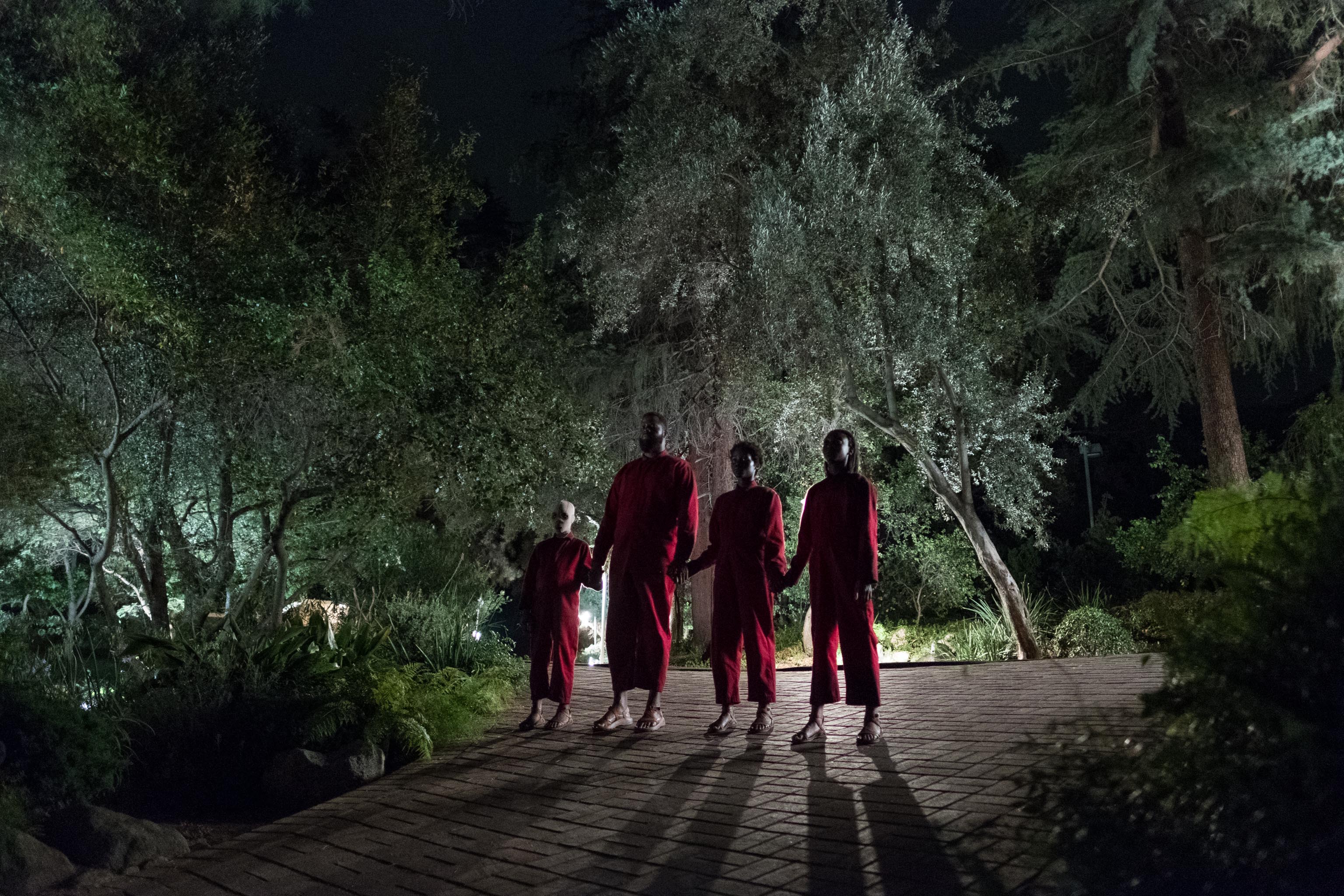 Have you ever had that feeling that someone is following you? You don’t see them, you don’t hear them, but you somehow just know that if you’re just at the right place at the right time – or in some cases the wrong place at the wrong time – you’re going to bump into that spectre. Sometimes it’s a relief but it could also go south real quickly. But what if that someone you finally encountered was not a friend or stranger but … you?

That’s just a very vague set-up for Jordan Peele’s latest thriller Us. In the film, Lupita Nyong’o plays Adelaide Wilson, wife and mother of two children, a boy and a girl. The film opens with a young Adelaide at a boardwalk amusement park, having wandered away from her parents to get lost inside a hall of mirrors with the phrase “Find Yourself” above the door. After the lights go out, Adelaide panics trying to find the exit but runs into someone else – her exact double.

As an adult, Adelaide and her family return to her childhood home near that same beach for the first time since her parents died. While her family is eager to hang out at the beach with their obnoxiously wealthy friends and their even more obnoxious twin teenage daughters, Adelaide is reluctant to go, flashing back on that terrifying memory. But her husband Gabe (Winston Duke) is persistent and she agrees to go provided they return before dark. It’s all set but when son Jason (Evan Alex) wanders off and panics Adelaide, that’s the end of the day. Later that night, daughter Zora (Shahadi Wright Joseph) says there is a family standing in their driveway. After the family violently makes their way into the house, Jason is stunned to find that “it’s us.”

And that’s about all I can tell you about the movie so as to avoid any spoilers. But questions to consider going in to the movie include “What does Hands Across America have to do with this?” and “Are there more of these doubles?” One of those questions is answered pretty quickly as the movie takes the viewer on a thrill ride that will keep you guessing from one moment to the next as to what’s happening, with an ending that’s straight out of a “Twilight Zone” episode. Fitting since Peele’s next project literally is a reboot of that classic series for CBS All Access. In fact, Us is probably the greatest thriller M. Night Shyamalan never made, solidifying Peele as a master of this genre.

There may be a message to this story, perhaps about the classes, but I don’t want to delve too deeply into that here, again to keep the review spoiler free. What I can say is that Peele has constructed a mostly tight, thrilling movie with only a couple of logical / plothole questions I had, but nothing that ruined the experience for me.

I’m going to call it out now that Lupita Nyong’o has turned in our first Best Actress nominated performance of the year. She is perfection and she’s fearless in her creation of two very different characters. Adelaide is a bit uptight, but a loving, strict mother who perhaps micro-manages her kids just a bit too much, but she turns into the proverbial “Tiger Mom” when her family is in danger. On the other hand, she gives us one of the most disturbing characters committed to film in Red, Adelaide’s doppelgänger. Red looks like Adelaide, just with a different hairstyle and a constant wide-eyed look of terror or menace or a combination of both. But when she speaks, her raspy, broken voice is the most disturbing thing of all as she recounts a story that basically explains their existence. And when she says to Zora, “Little girl … Run!” it’s the stuff of nightmares. Nyong’o gives us two bravura performances here.

In fact everyone has to pull double duty. Duke’s two characters couldn’t be more different with Gabe a fun-loving jokester, and Abraham is an imposing, wordless giant of a man, not someone you’d want to bump into in a dark alley. Joseph is also terrific as Zora and Umbrae. Zora is a typical teen and she has some great facial reactions to various things, while Umbrae constantly has a frozen, creepy smile on her face that is anything but friendly. Alex may have the hardest role as the two boys. His Jason is a bit too babied by his mother, always with a Halloween mask propped up on his head (maybe Chewbacca?). He likes to prank his sister but freaks out when she turns the tables. He also likes magic and keeps attempting to do a trick with a lighter. Pluto, on the other hand, is a frightening feral child, his face almost always covered by an asbestos mask because he’s just a little too friendly with fire. He’s almost always running around on all fours like a dog, hence the name Pluto I suppose. These really are four great performances.

Elisabeth Moss and Tim Heidecker are also good as the friends, offering some occasional comic relief in their banter together, but not much help when it comes to dealing with the Wilson family’s doubles. Well, on second thought, they do help inadvertently. I also have to mention the terrific score by Michael Abels that is melodic and unsettling at the same time and the excellent choice of songs used in the movie. The film opens with some on screen text that is very important to the story’s big reveal so don’t forget about that as you’re watching. Also keep Adelaide’s childhood encounter and Hands Across America in mind as they are both key plot points. It will be interesting to see how this film plays in the rest of the world because it is decidedly American. At one point, Red even says, when asked who they are, “We’re Americans,” which again has to make you wonder if there is a deeper message or an indictment specifically on American society at play here. Message or not, Us is a terrific thriller – I wouldn’t really call it a horror film, although some have deemed it terrifying – that will make you laugh and gasp and perhaps talk about afterwards. I heard a lot of people in the lobby discussing the film after the screening and that’s always a good sign. Us is definitely the first real “must see” movie of the year.