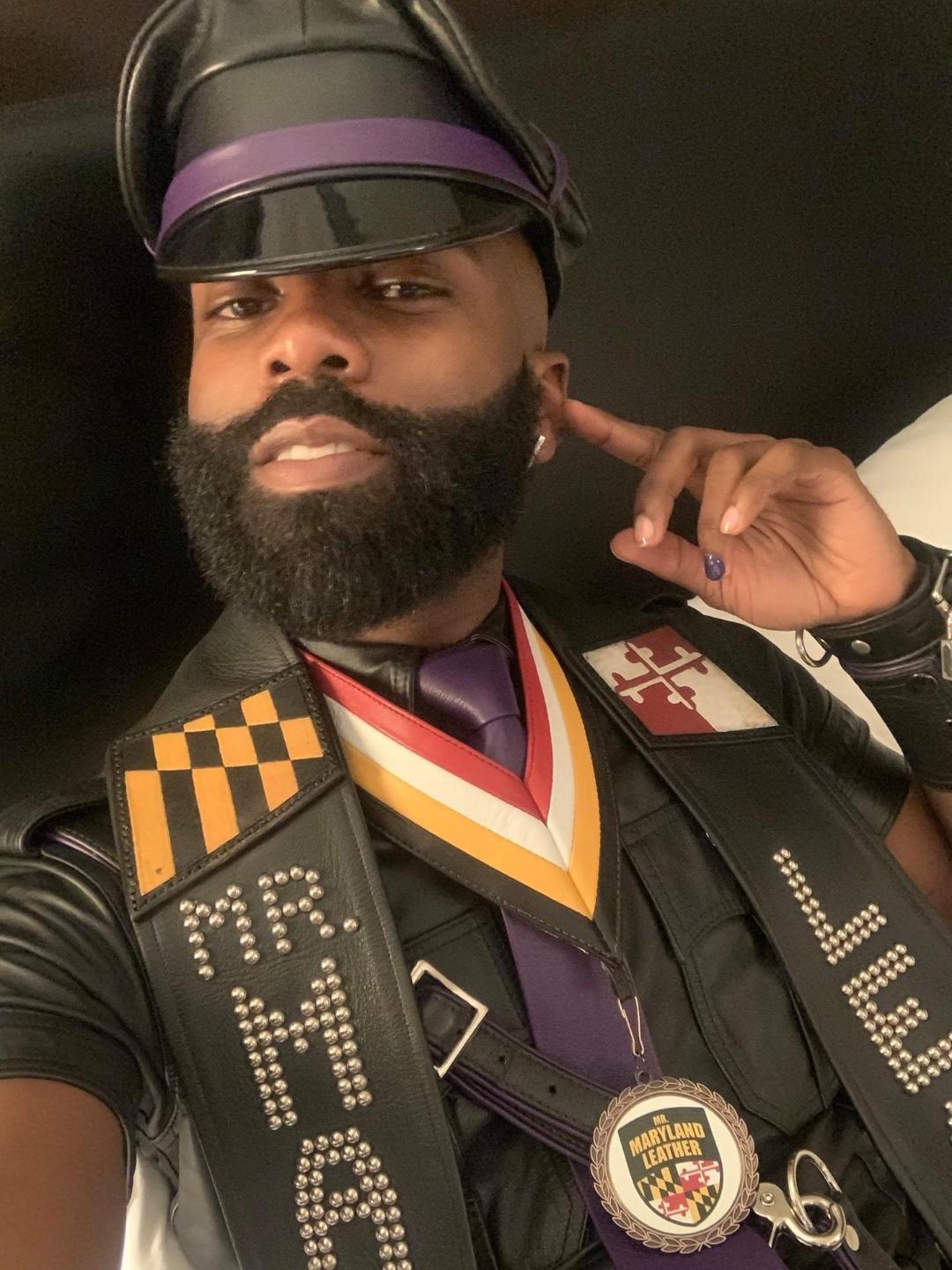 I was a leather titleholder in 2001. This means that during my title year the unthinkable happen on September 11th. It was a horrible few day. Slowly our nation pulled together, we went back to work, and things returned to normal. I hosted a fundraiser at the Baltimore Eagle for the 9/11 Fund. Life went on. I thought about those days again this afternoon when I sat down with Mr. Maryland Leather 2020 Sir Oya Ra. His leather title year will also be remembered for a tragic event. However, the coronavirus has not stopped the world for a few days, everything has closed for weeks. Hosting a bar night benefit is not an option, leather events are canceled, and even the International Mr. Leather Contest (IML) in May has been postponed. I couldn’t even meet Sir Oya Ra for lunch or for beers at Leon’s, as I enjoy doing when I do interviews. Just like Robin Roberts on Good Morning America, I sat in my home and did the interview via FaceTime. At least thanks to modern technology, I could see our handsome Mr. Maryland Leather titleholder’s smiling face.

Born and raised in Baltimore, he now lives in Southwest Washington. I started by asking him what he has been doing to stay upbeat during this current situation. He said that he has been trying to use this down time constructively. Like a structured school day, he sets aside parts of each day to learn. He has been working on becoming even more effective in BDSM by looking at panel discussions and demos online. He has spent time upgrading his sling at home and building rigging for rope play. He is also planning to improve his knowledge of American Sign Language. He is really looking forward to representing Maryland at IML and is concerned that new dates have not yet been announced. He is thinking that when it is rescheduled, the judges may change due to scheduling conflicts. If it is held in late summer or fall, his schedule is going to have many conflicts with leather contests and pride events all trying to squeeze in a new date. One contest he has been asked to judge has already been rescheduled and now conflicts with another leather event. It is a difficult time.

Sir Oya Ra says that he felt very sheltered as a young man and saw his kinks and exhibitionism as a way to make vanilla sex less boring. He met Master Eli (Mr. Maryland Leather 2016) and learned from his online “Pillow Talks.” Master Eli was the first one to ask him several years ago if he wanted to be a leather man and Master Eli has become his mentor. He is now a member of the Illuminati House of Ra. It is not a leather patch club like ShipMates or COMMAND, MC. It is a leather family that currently consists of five people under the leadership of Master Eli. Although he is devoted to his leather family, he describes his relationship status as “romantically single.” Running for a leather title is always a big step. Sir Oya Ra states that before stepping up one must first have some perspective of what the leather community is all about. Interested contestants should “have their ego in check” and spend time talking to members of the leather community. They should also research the leather community and its place in the gay rights movement. They should do a little reading, such as the The Leather and BDSM Handbook by Vincent L. Andrews. It also helps to have a mentor. Sir Oya looked at the strengths and weaknesses in the community and ran for Mr. Maryland Leather so that he could help be the bridge between his many vanilla Baltimore friends and the kink community. He wanted to bring the leather lifestyle that he discovered in DC back home to Maryland. He wants to help introduce the younger generation to the true leather community and give them an opportunity to “eat the meat and spit out the bones.” I told him that I recently had a conversation with a person who felt that leather titleholders were a relic and that contests such as International Mr. Leather were obsolete. Sir Oya disagreed. He said that IML gives one a megaphone. He added that last year’s IML contestant class was the largest and most diverse. “The leather community needs to keep the leather history, even as it changes. It needs to become comfortable with being uncomfortable.”

For now, Sir Oya Ra is dealing with the difficulty of trying to be a leather titleholder when the world is shutdown. He had planned to give a presentation on impact play at The Crucible in DC, but now that has been postponed. He may reschedule or do his presentation online. His “Black and Kinky Happy Hour” on March 11th at Nellie’s Sports Bar was a big success and he is thankful for everyone who turned out. He looks forward to more such events in the future. I finished by asking him what the first thing is he will do when the “Stay at Home” order is lifted, and he offered some very good advice. He said that he will go to the gym, but is not going to rush out to packed public places too soon.