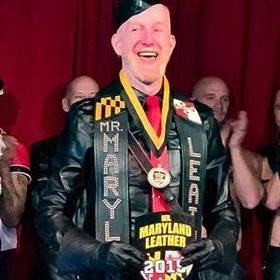 It is that time of year again: the holidays are over, Sir Steve has left for Florida for the winter, the Ravens have lost, and the days are dark and gray. It is so easy to just stay home, curl up on the sofa, and watch TV. It is also easy to feel lethargic and melancholy. On Tuesday, January 8th I had a date with Mr. Maryland Leather 2019 Scorpius Red and after what felt like dinner with an old friend, I was once again ready to face the world.

The bar downstairs at the Mt. Vernon Stable was buzzing when I walked in. I was early for my meeting and slid onto the only available barstool at the bar. Scorpius arrived right on time and we moved to a table in the back. We had met before. He is not one of those titleholders who started his leather journey on a contest stage. He has been out in the leather community for years- in fact many more years than I knew.

Scorpius was born in Georgetown, Ontario about 34 miles from Toronto. He discovered leather at age 17 when a gentleman took him to the 18 East bar in Toronto. The bar, which would later relocate and be known as the Tool Shed, had a restaurant and bar on the main floor, but a whole other world existed in the basement. That is where the leather men would cruise. Scorpius said that he entered as a “scared little twinkie” but discovered that he liked pain play and the Sir / boy dynamic and before long was buying his first leather harness at Northbound Leather and hitting the Cellblock.

He didn’t have a mentor and a master of another kind brought him to the United States when he moved to Michigan to obtain his Master of Public Health. A quest for a PhD brought him to Connecticut and later he moved to College Park, Maryland. He now lives in Baltimore.

Although he had discovered leather and fetish play in Canada, he really wasn’t aware that there was a whole leather community until he saw something at the DC Eagle. One night he glimpsed the wall of shelves next to the club bar that contain pewter mugs that are arranged by club and engraved with the names of club members and suddenly he knew that the leather community was more than just bars and apps. When he met members of ONYX who warmly welcomed him, he became an associate member. He also met several leather titleholders.

After thinking about it for several years, last November he decided to run for the title of Mr. Maryland Leather 2019. He had attended the International Mr. Leather Contest in Chicago twice and was aware that being a leather titleholder is a job. He was ready to step up because he had something to share: the politics of inclusion. The leather community means so much to him, but there is a problem. Some leather folks are still anti-woman or anti-trans or even not welcoming to young people. This is his platform. He wants to be that bridge to help the leather community embrace diversity. Scorpius is selling a great t-shirt with the motto: “Leather Together” with the money going to his travel fund. You can find details on the Mr. Maryland Leather 2019 Facebook page and at teespring.com/stores/Mr-Maryland-Leather-2019.                                           He also wants to reach out to other to members of the LGBTQ community who may have little or no interest in leather. Scorpius is very aware that not everyone shares his kinks. In fact, his partner of 18 years and husband of 8 is not a leather person. (They have an understanding regarding shall we say extracurricular activities.) He hopes to also spread his message of inclusion beyond just the leather community.

The t-shirts are just a start. He will be working with his sponsor COMMAND, MC at monthly bar nights on the first Saturday of each month at Leon’s and plans to hold his sendoff to IML there on May 4th. Additional fundraisers are also in the works. In June look for Mr. Maryland Leather 2019 at all the Pride events throughout the state, not just Baltimore.

After just two months I can say that I am proud of him too. I have already seen him at many events and am thankful that he got me out of the house on a Tuesday night. Next up for both of us is the Mid-Atlantic Leather Weekend in Washington, DC. No one can be melancholy about that!