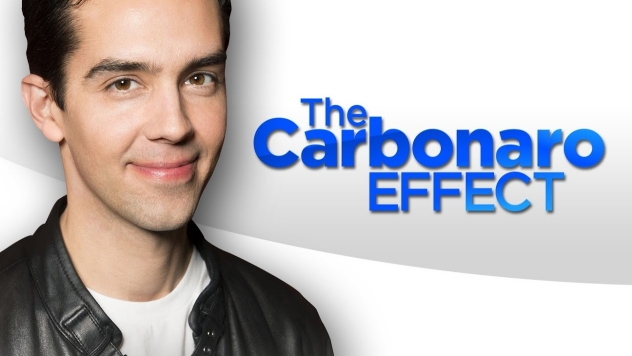 An interview with The Carbonaro Effect’s Michael Carbonaro

With his mesmerizing and hilarious hidden camera and practical joke series The Carbonaro Effect, now in its third season on truTV, out actor and illusionist Michael Carbonaro keeps viewers (and his unwitting subjects) guessing. A whiz of a wizard, if ever there was, Carbonaro first crossed our gaydar as sex-obsessed Andy in the 2006 rom-com Another Gay Movie. But his greatest success and exposure has occurred through his longtime love of the magical arts on The Carbonaro Effect. Carbonaro is currently on a cross-country live performance tour bringing his effect to your part of the world.

Gregg Shapiro: How did you first become interested in- and I want to pronounce it correctly- prestidigitation?

MC: When I first moved to Los Angeles, eight years ago, and got to perform at The Magic Castle for the first time, I was working in the Parlour of Prestidigitation. So that was one I had to learn myself [laughs]. I do love that you gave it another name other than magic or illusion. Because it is a big umbrella for me, what illusion or magic or prestidigitation is. I began with, and still have, a love of special effects. I talk about this in my live show. A huge love of Halloween, costumes and make-up. I had no doubt that when I grew up, I wanted to be a make-up artist. I would buy make-up supplies at a local magic shop in Hicksville near where I grew up on Long Island. There were guys behind the counter who were showing real (magic) tricks. I went there for the make-up and it was full of masks and puppets and gags and pranks and bloody things and zombies. It was theatrical too; there was stage make-up. It opened up this world where illusion is all of that. I became interested in magic from going to buy make-up supplies. Through magic, buying those tricks and trying them out on my friends, I noticed that I had a love for performing. If special effects brought me to magic, then magic brought me to performing. All three of those things are still just as strong as the other. I think they all tie together in the work I’m doing. I didn’t know whether I wanted to be an actor or special effects artist or magician. Well, how about if I do all three of those in the show?

GS: Who are, or were, your illusionist heroes?

MC: Excellent! Look at how this all comes together! My favorite illusion book of all time is by Tom Savini. It’s called Bizarro, later titled Grand Illusions. I love that it was called Bizarro! His book reads like a magic book. It’s the effect I need to make. I need it to look like this troll that’s running across the floor, so I have this trick platform and I slide it and this guy’s in a costume. First I show this, then I show that. It’s a magic book dealing with monsters, so that was it for me. Magic books and (David) Copperfield. Because he, more than anyone embodied this host of all these things that were magical. He would talk to the audience and be funny and go off into some weird fantasy illusion and come back and do a silly little gag. I love that atmosphere that he created.

GS: How would you say that your sleight of hand skills worked in your favor as a gay man?

MC: Whoa! I don’t know if I’ve ever considered that question. There is something sexy about secrets, isn’t there? I wasn’t out in elementary school or junior high. But I started to find the right kinds of friends in high school. The music department in my high school was really tight knit and we did plays together and were in the chorus.

GS: That was often the GSA before there were GSAs.

MC: Exactly. Right [laughs]? As we used to call the wonderful theater where I’m from on Long Island – it was the Creative Ministries Performing Arts Center, now the Noel S. Ruiz Theater named for the man who ran it – we used to call it the Creative Ministries Coming Out Center [laughs]. I think John Waters talks about this, too, from his generation. It was better when you had to sneak around and come up with little plots or plans or however he put it. There was something about having a secret that was cool. I guess I was better at setting up secret situations and knew how to hide my tracks the way a magician would. Before I came out!

GS: In addition to being the title of your show, you use the catchphrase, “the Carbonaro effect”. How did that catchphrase come into being?

MC: I’ll be honest with you, this was a pitch from the network. And I’ll give it to them. All projects are always a changing and developing thing. You find what it is as you’re making it. I was certain that I wanted to call the show Michael Carbonaro: Trickster. I love the trickster character, I think he embodies what I do on the show. Like Bugs Bunny, poking you in the right direction, playing along with you, making you wonder. That made sense to me. When they first pitched it to me, I was like, “Oh, no, I don’t know!” I always had this weird thing with my last name. I always thought people wouldn’t remember it. It’s confusing. When I was 17, I used to perform as Michael Christopher.

GS: Is Christopher your middle name or something?

MC: Nope! Made it up. If David Kotkin can be David Copperfield, I’ll be Michael Christopher! In retrospect, it did sound a little like a hair salon. Now, that title became what it was we were trying to capture. That moment when an intelligent adult mind can be brought to a state where they wonder for a second if there’s a secret trap in the universe that they didn’t know existed and they believe that for a moment. Isn’t that beautiful? That’s the Carbonaro effect.

GS: The Carbonaro Effect, the show, has as much to do with hidden cameras as it does with magic. Did you ever get to meet Allen Funt, the man behind the popular Candid Camera, one of the original shows of this kind?

MC: I never did, but I watched his show a lot as a kid. I watched all the reruns of that show. You’re right, there’s a magic to that. A hidden camera falls under that hidden illusion we talked about. It’s like I’m hiding a camera secretly behind a mirror that doesn’t look like it could be there. That’s a magic trick.

GS: You appear to make good use of your everyman appeal and improvisational skills on The Carbonaro Effect. Of the two, is there one that you rely on more than the other in the scenes on the show?

MC: That’s a great question. It really is a weave back and forth between those two. I think there’s meter somewhere. I would say that it depends on the moment. If someone is in that state where they need to be looking for clues as to what just happened, sometimes my best bet is just to look down and be in a state of amazement myself. That would be acting, processing the thought of something I just saw. That way I can afford them the private moment to do that themselves and react how they would. This is kind of a new thing we’re doing as the show develops over the seasons. If I think the person is going to get me first, I’ll be like, “Wait a minute! Is this like a freakin’ prank show? How did we get out here?” I will throw it out there first. Because if I’m clearly the only one who could have caused what just happened, then they start to doubt. So, there’s the acting again. The answer is it’s always a needle going back and forth between those two worlds.

GS: How does your husband, (actor) Peter (Stickles), feel about magic and pranks?

MC: He loves them! He loves the life. Our house has a gremlin puppet in it and an alien face-hugger and Jaws posters. Peter was in love with horror as much as I was as kid. We meet on that level. Peter travels with me to do the tour. There are acts he performs with me as a magician.

GS: In addition to your TV gigs, you have also appeared in films, including “Another Gay Movie”, for which you received an acting award from L.A. Outfest. Do you have plans to do more acting?

MC: Absolutely! Yes, a million percent. This show is serving so many aspects of things that I like to do. That’s a huge part of it, that acting energy.  I look forward to having time in my schedule, but right now I’m pretty booked up. I look forward to having a one-man Broadway show and comedic sitcom work and films. I want to direct a horror film myself.

GS: You are currently doing a series of live dates. What can people expect when attending one of your shows?

MC: The best part about the live show, in the way that you were talking about Candid Camera, that energy of playfulness, that same world of non-mean-spirited fun…I talk about this in the live show. I regularly get a similar letter from fans thanking me and saying that my show is the only one on television that they watch with their entire family. That’s the same energy that comes through in these big, beautiful theaters across the country where I perform. The live show is a playful, all-ages show, with the same wry wit from the TV show. I’m loving it as much as the audiences. I’m having a blast. Also, just come and check out that it’s not all camera tricks. Every diehard fan wonders if it’s camera tricks. I say, “Get yourself a ticket, come on down and watch the magic!”