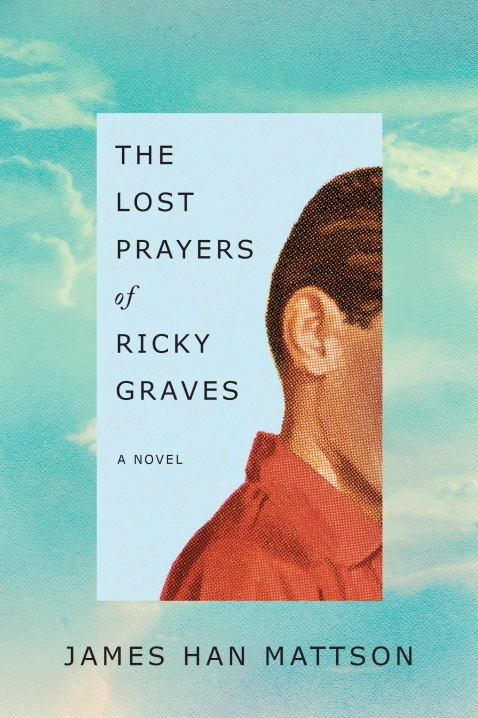 In his debut novel, The Lost Prayers of Ricky Graves, author James Han Mattson tackles several complex issues – a gay teen struggling with his sexuality, online relationships, mean spirited teens, small minded folks, and a life-altering tragedy. A dramatic cocktail like this has the potential to be overwhelming, but Mattson skillfully crafts a piece of literature that sparks a conversation about the real and digital world in which we live, rather than condemning it.

“The event that spurred the idea was the Tyler Clementi case in 2010,” says Mattson.  Clementi’s suicide brought national attention to the issue of cyberbullying and the struggles facing LGBT youth. “I remember reading that story and feeling sick to my stomach. A lot of stories make me feel something, but not a lot of stories make me feel that physical reaction. I knew I had something after I read about that.”

Early feedback to the novel has been glowing. Mattson says he was pleasantly surprised by the feedback. “People have been kind and have reached out to me to tell me how much the book meant to them. People always ask me who I am in the book, and I’m kind of everyone. I inhabit some of the characteristics as people in the book,” says Mattson. “I was an isolated gay teen, and I didn’t have the internet. I don’t think I’m like Ricky, but there are things we shared. If I had grown up with the internet, how would that have changed things? It would be difficult. Teens are more anxious than we were because they curate it and worry about it.”

Lost Prayers tells the story of Ricky Graves through the eyes of those that surround him: family, friends, classmates, and bullies. “It’s very different from where I started writing in 2010. As I think about the very first draft, it was nothing like this,” remarks Mattson. “It had 30 characters in this [small] town, but it was a jumbled mess. With each draft, I just whittled it down to six characters.”

Readers never hear from Ricky directly. Mattson only gives us glimpses into Ricky’s mind through chat room transcripts with his crush, Jeremy. Each character shares their insights and perspective of events in a mix of prose, transcripts, and email chains. “Ricky was the central focus, but I was more interested to see how people reacted and the aftermath of the event. Ricky is seen differently through each character’s eye. In that way, he gets fleshed out because each person perceives him differently,” says Mattson.

The catastrophic event in question is sparked through social media. Throughout the book, characters vacillate between feeling isolated and ostracized on social media to cultivating meaningful relationships with others. One character in particular, Jeremy’s boyfriend, Craig, fasts from the digital world and criticizes everything about it. “[Craig’s] whole speech about the ‘digital tapestry of unanswered prayers’ comes directly from my thoughts on social media at that time,” explains Mattson. “I feel like Craig. I feel like I’m being assaulted by people’s insecurities. It’s about validation and who can get the most likes. It’s troubling.”

However, Mattson also says that the internet can be an incredible tool. “I wanted to create a discussion on both sides. Social media has done wonderful things. It can give people the opportunity to congregate effectively,” says Mattson. “I didn’t want to lambaste the internet. It isn’t this thing that turns us into zombies. In some ways, it also helps people reach out.”

After Tyler Clementi’s suicide, the “It Gets Better Campaign” began. The campaign was designed to help teens realize that the gruesome high school years would end, and life would get better. Mattson says that while the campaign began with the best of intentions, it is problematic. If you have any empathy for a 14 year old, telling them to ‘wait and it gets better’ isn’t real nice,” says Mattson. “If I’m the 14 year old, I’d say ‘Screw it. What are you going to do to make it better?’” Instead of telling a teen that you got through it, so they can to, he says that adults need to help coach teens to actually get through it.

“I’d talk more to adults to get teens though this. I think teenagers influence their peers. It’s more important for the kids to build a network within themselves,” says Mattson. “We should facilitate that in a bunch of 14 year olds rather than inserting ourselves in their lives and say ‘It gets better.’ Make sure they have a supportive social circle. Time for a bullied kid moves like syrup; it’s torture for hours and hours a day.”

In the book, Ricky’s sister says, “It wasn’t anyone’s place to make fun of something someone was truly struggling with, because look: everyone has something very sensitive beneath their outside selves, something they won’t talk about to anyone. Secrets.” The Lost Prayers of Ricky Graves definitely has secrets, and reading about them will hopefully help open people’s eyes to the world around them.