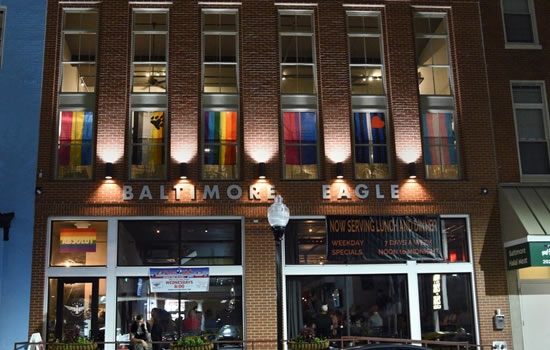 As the ball dropped in Times Square last New Year’s Eve many in the LGBT community dreaded what the New Year would bring. After a surprise presidential election we were left not with hope but fear. Now they we’ve almost made it through 2017, let’s take a look back at the year that was.

In keeping with the building fear in our community and a rise of anti-LGBT sentiment, the front page of the January 6th, 2017 issue of Baltimore OUTloud gave details about the LGBT Health Resource Center of Chase Brexton Health Care hosting a class called “Queer Protection: An LGBTQ Self Defense Class for Our Community.” On January 20th, Trump’s inauguration was held, complete with a bevy of anti-LGBT clergymen praying over him. It was also noted that information on LGBT rights, climate change, civil rights, and other vital issues disappeared from the White House website on inauguration day.

Back in Baltimore on January 20th, there was a bright spot to take our mind off of what was happening at the other end of the BW Parkway, as over 600 people celebrated the opening of the Baltimore Eagle nightclub after years of anticipation.

The next day women from all over the country wasted no time expressing their displeasure with our new president and held the Woman’s March on Washington, on January 21st.

While some in Washington started to think about how to reverse the progress of same-sex marriage, the sixth annual Rainbow Wedding Network LGBT Expo was held at the Hyatt Regency Inner Harbor in Baltimore on January 22nd, with over 30 LGBT friendly wedding service providers in attendance. On January 28th, at the DC Eagle, Brother Help Thyself presented its annual grant awards totaling $75,170 to over 30 non-profit organizations serving the LGBT and HIV/AIDS communities in the Baltimore / Washington area. On January 31st President Trump selected Federal Judge Neil Gorsuch as his choice to replace the late Supreme Court Justice Antonin Scalia. LGBT groups were quick to oppose the nomination based on his anti-equality record.

On February 22nd, President Trump announced that he would reverse the Obama administration’s guidelines allowing transgender students to use the restrooms that correspond to their gender identity.

February also brought Deborah Cox to Baltimore’s Hippodrome Theatre to channel her best Whitney Houston in the stage production of The Bodyguard. On February 26th, Moonlight became the first gay-themed movie to win an Academy Award for best picture.

Many fans and members of the drag community were worried when Baltimore’s Club Hippo closed to become a CVS. The Hippo was a popular venue for many drag performers. 2017 saw an explosion of many new locations for this popular form of entertainment including Towson University’s first even “Drag Brunch” on February 27th.

The March 3rd issue of Baltimore OUTloud introduced readers to Christian J. Metzger, the new executive director of Moveable Feast, a Baltimore organization that for 28 years has been providing healthy meals to people living with HIV / AIDS in the Maryland area.

The weekend of March 3rd and 4th also found the Pennsmen leather club of Harrisburg celebrating 40 years of brotherhood.

On March 6th many folks started to worry what would happen to their health care as President Trump unveiled his plan to kill Obamacare.

On March 22nd Baltimore learned of the grim news that “Peaches,” a transgender woman, was murdered; adding another name to the list of transgender persons killed in our city.

On March 28th it was announced the President Trump would remove LGBT as a category in the 2020 census.

On March 31st Gilbert Baker, the creator of the rainbow flag, passed away at age 65 in New York City.

Baltimore’s long-dark Parkway Theatre at Charles and North reopened as the Stavros Niarchos Parkway Film Center, boasting a 414-seat theatre (built in 1915) and two small 85-seat theatres. The Parkway will serve as the headquarters for the Maryland Film Festival.

On April 20th to 30th, Ringling Brothers and Barnum Bailey Circus made their final appearance in Baltimore. The circus closed permanently in May.

On April 21st GLSEN’s (Gay, Lesbian, and Straight Education Network) sponsored a “Day of Silence” as part of a student-led national event organized in thousands of schools to bring awareness to the silencing effects of anti-LGBTQ name-calling, bulling, and harassment.

The Baltimore Eagle officially celebrated their grand opening on the weekend of May 5th to 7th.

A grand opening was also held on May 8th for the new John G. Bartlett Specialty Practice. The new institution located at 1717 East Monument Street combines under one room the current Moore Clinic which serves persons with HIV / AIDS and the Blalock Specialty Clinic serving patients with hepatitis.

On May 11th PFLAG (Parents and Friends of Lesbians and Gays) of Howard County hosted a fundraiser called “Queens and Cocktails 2017” at the historic Oakland Manor in Columbia, Maryland.

Baltimore OUTloud celebrated 15 years of being an independent voice for the LGBT community on May 16th.

An event in celebration of National Honor Our LGBT Elders’ Day was held on May 16th at the Baltimore Eagle.

Metropolitan Community Church of Baltimore celebrated their 45th anniversary on May 20th and 21st.

Also on May 20th the Harrisburg Gay Men’s Chorus held a concert at the Harrisburg Midtown Arts Center to celebrate 30 years of entertaining the community.

On May 27th the Creative Alliance was the setting for the first ever Baltimore Drag Awards.

In a salute to the 40th anniversary of the Gay, Lesbian, Bisexual, and Transgender Community Center of Central Maryland (GLCCB), Baltimore OUTloud introduced readers to GLCCB co-founder and the Center’s first president Paulette Young in our June 9th issue.

AIDS Action Baltimore hosted busses to take people to the Equality March for Unity and Pride in Washington, DC, on June 11th.

Baltimore Pride was held June 17th and 18th with a longer parade route and a new Stations North location for the block party. The parade, block party, and festival in Druid Hill Park were just a few of the events held during a weeklong celebration. It was Frederick, Maryland’s turn to celebrate on June 24th when Frederick Pride was held at Carroll Creek Linear Park.

The new King and Queen of Baltimore Pride 2018, Chris Jaya and Sapphire Bleu, respectively, were crowned.

The fifth annual “Pride Splash and Ride” was held at Six Flags America.

The sixth annual BBQ for the homeless served hundreds of homeless people.

The first annual “Faith HIV / AIDS Awareness Day” was held in Baltimore and cities across the country.

The “2017 Black Trans Advocacy Conference” was held in Baltimore.

Moveable Feast hosted their 24th annual “Dining Out for Life” Fundraiser at restaurants across Baltimore.

Rev. Angela Teresa Jones-Ramirez was installed as pastor of the Vision of Hope Metropolitan Community Church.

The GLCCB held its annual meeting and town hall to provide updates on the progress of the Center during the past year.

“Miami is Nice,” an exhibition and gay marriage installation focused on the Golden Girls, was held throughout the month, together with several events including “Cheesecake Conversations,” at SpaceCamp.

The Gay Lounge announced its closing, after only a few months of successful business, due to problems with the property owner, but promising to reopen at another location in the future.

Don Davis, owner of Grand Central, announced that the nightclub is up for sale.

“Feeding the Homeless,” organized by B and Dee’s Baltimore Love, held over two weekends, fed over 2,000 homeless people.

A panel discussion was held around the subject of HIV criminalization and the new book by Trevor Hoppe, Punishing Disease: HIV and the Criminalization of Disease.

Community members marched in the annual Transgender March of Resilience, and gathered to celebrate and remember those lost due to anti-trans violence on the Transgender Day of Remembrance.

Baltimore Cranksgiving, a scavenger hunt on bicycles, was held to benefit Moveable Feast.

Joy Baltimore hosted “Oh Give Thanks,” a Thanksgiving event for homeless LGBT youth.

On World AIDS Day, events were held across Maryland to honor those who have died while living with HIV / AIDS, and to recommit to the battle against the stigma and challenges of the disease.

The Baltimore Mens Chorus and the New Wave Singers of Baltimore both held their winter concerts.

GLSEN led a protest of Secretary of Education Nancy De Vos and her department’s policies, as she visited the University of Baltimore to offer a commencement speech.

Several holiday events for the homeless took place including a holiday party at the First Unitarian Church of Baltimore and an event providing cookies and hot cocoa to the homeless.