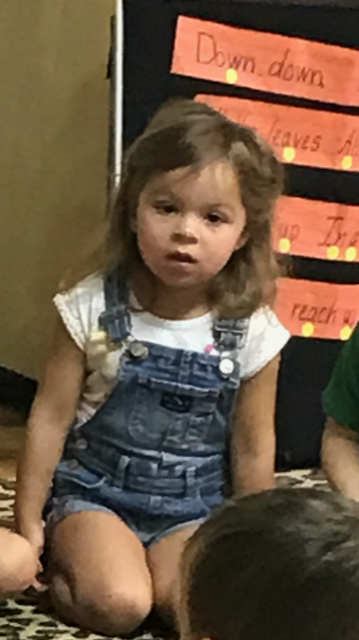 After more than 20 years of raising kids with traumatic backgrounds, I’ve discovered one very basic thing about myself. I’ve discovered that I am very quick to react to situations when I see my children being intentionally traumatized. For example, when it’s time for toddlers to get shots, we discuss it first. We have never physically punished our kids either. We just don’t see a need for it. Kids can learn without being hit. We don’t want them to hit, so why would we hit them.

This month has been particularly challenging with Cassandra. She started preschool in September. The first few weeks were amazing. She enjoyed the activities and looked forward to going each day.

Every morning, Anthony walked her to the entrance where she was met by one of the teachers and escorted inside. There were lots of pictures on the preschool website that showed her enjoying her time there. It was great.

Until it wasn’t so great. One day, about three weeks ago, Anthony was told to stop walking Cassa to the door. Instead, he was told that he had to join the line-up and have the teacher remove Cassandra from her car seat. The first day, Cassandra was pouty. The next, she refused to go. All of a sudden, Cassandra said she didn’t like school.

The school insisted that we continue to try their approach. Each day was worse. Cassandra screamed “no” and “help” each time she saw the teacher who was assigned to remove her from the car. She became clingy. She began to cry as soon as she woke up in the morning. Then, she started crying the night before as we prepared her snack for the following day. Her reactions weren’t temper tantrums and they were ridiculously out of character for our little girl.

So, we consulted with my sister-in-law, who is an educational psychologist who specializes in the preschool age group. The more we talked, the more we realized that Cassandra’s reactions were not simple separation anxiety. She was reacting out of fear. I tried staying at school for a while with her. She liked it. The preschool did not, even though they had said that parents were always welcome.

We attempted to break the cycle and managed to get rid of the crying. We read stories about going to preschool and why it’s fun. We reminded her of her friends and got her to talk about playing with them. We went to the preschool when no one was there to practice walking up to the door. She was a little somber, but no tears. It wasn’t until she saw that one teacher that she broke. She looked up with absolute fear in her eyes and begged to go home. So, we went home.

The next day, Cassandra had a routine well-child appointment with her pediatrician. You should know that this doctor takes special interest in Cassandra because of her rough beginning. But, it was surprising when she walked in the room and immediately asked what had happened. She noticed that Cassandra’s personality was different. She noticed her reaction every time the word school was mentioned. She noticed that Cassandra seemed afraid of the doctor, when she never had been before. When I told her what was going on at school, she insisted we pull her out immediately. She could not understand why the school didn’t work harder to help us figure out what happened to change Cassandra’s attitude toward school. And, she insisted that we pull her out immediately.

So, we did. It’s only been a couple of days, but after we told Cassandra that she wasn’t going back to school, she has been a happier kid. I don’t know what happened. It may have been something small and easily repaired. All I know is that Cassandra’s school didn’t try to fix it. They made excuses and tried to force Cassandra to conform. And, for me, that is not okay.

Little people have opinions and feelings. It’s important that we recognize and honor their emotions. Cassandra is almost three years old. She has a lifetime to conform and obey the rules. For now, I’m letting her be a little girl who needed a little space to feel comfortable.