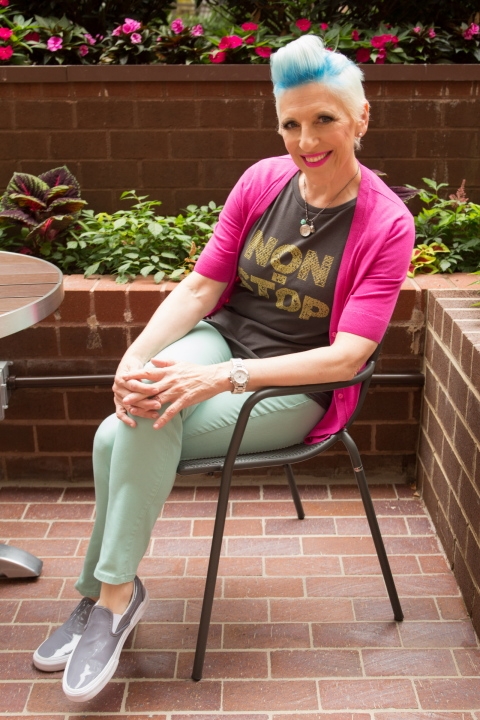 The first group that really got my comedy were gay men. The lesbians, they took a little longer, but eventually came around…

White Rabbit / Red Rabbit has been called a play, but it’s a lively, global sensation that no-one is allowed to talk about. Slyly humorous and audaciously pointed, this “theater entertainment meets social experiment” is unlike anything, and will make you question everything. Running from December 12th to 23rd, the performance has cast an array of local and national talent and celebrities to perform the curiosity live for the first time each night.

Lisa Lampanelli, the well-known comedian / actress / playwright, will perform for audiences on Tuesday, December 19th. Heralded as “Comedy’s Loveable Queen of Mean,” Lampanelli chatted with Baltimore OUTloud to discuss her upcoming performance and what Baltimore can expect her not do while she’s in town.

Frankie Kujawa: What can audiences expect from your performance of White Rabbit / Red Rabbit?

Lisa Lampanelli: Well, I’m not only a comedian, but I also love acting and playwriting. Now, I’ll tell you that I know nothing about this play. Other than I’ve heard about the legendariness of it, and that you can’t read it beforehand. You just read it and go! Why would I be worried, at all? I’m clearly going to nail it, because I get up and do comedy on stage without it always being planned. I’m not going to call anyone a cunt unless it’s written in the script!

FK: Have you been to Baltimore before?

LL: Yes, many times. I’ve played the Meyerhoff Symphony Hall before. That’s a very classy place, and as you know, I’m very classy myself. Baltimore is in for Lisa Lampanelli doing my impression of a classy bitch. I’m coming down and expect that theatre to take me out to dinner and a fabulous breakfast. I’m not just some Off-Broadway cheapie. I expect them to take me out for a few fabulous meals!

FK: You know, Baltimore has been known to have some good-looking guys around town.

LL: Well, you might not know this, but I’ve been celibate for almost the last five years. I enjoy not having sex because what did I get out of it? Nothing but a UTI and a stiff neck! I’m not ready to have a pinched muscle so, no, I won’t be breaking my celibacy for [Baltimore]. Though, I may look but not touch!

FK: As an ally, why do you think you have such a bond with the LGBTQ community?

LL: Well, it started off because they really got me. The first group that really got my comedy were gay men. The lesbians, they took a little longer, but eventually they came around and really seem to enjoy my show. Ever since the gay men were so amazing to me from word one I thought, “Okay, let’s somehow give back to them.” That’s why I aligned myself with Gay Men’s Health Crisis in New York. Somehow, the gays and I go together like peanut butter and chocolate.

FK: Where does your inspiration for comedy come from?

FK: So what’s next for Lisa Lampanelli?

LL: We just closed the Off-Broadway run of Stuffed [written by Lampanelli], and I’m taking a two-month vacation! I don’t know why I took pity on this CenterStage Theatre to interrupt my vacation to come down! Just like back in the day they needed Joan Crawford to come in, I guess CenterStage needs Lisa to come and bring down the house!