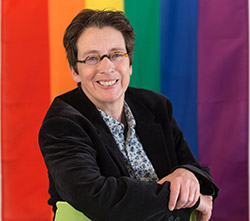 Los Angeles – A new analysis finds that the 25-year-old children of lesbian parents are more likely than their peers to report same-sex attraction, sexual minority identity, and same-sex experiences. The 25-year-olds are participants in the ongoing US National Longitudinal Lesbian Family Study (NLLFS), which has followed the same cohort of offspring from conception to adulthood. It has had a 92% retention rate since it began in 1986. The current analysis compared 76 offspring of lesbian parents and 76 demographically matched participants from the National Survey of Family Growth (NSFG).

“Our 2018 study in the New England Journal of Medicine revealed that adults who were conceived through donor insemination and raised by lesbian parents are as psychologically healthy as their peers,” said lead author Nanette Gartrell, MD, of the Williams Institute. “Our current study suggests that being raised by sexual minority parents may lead to more diverse sexual expression for their adult daughters and sons.” Co-author Henny Bos, professor at the University of Amsterdam said, “The offspring of sexual minority parents may have more expansive perspectives on sexuality because they were raised by parents who are nonjudgmental about their exploration of non-heterosexual relationships.”