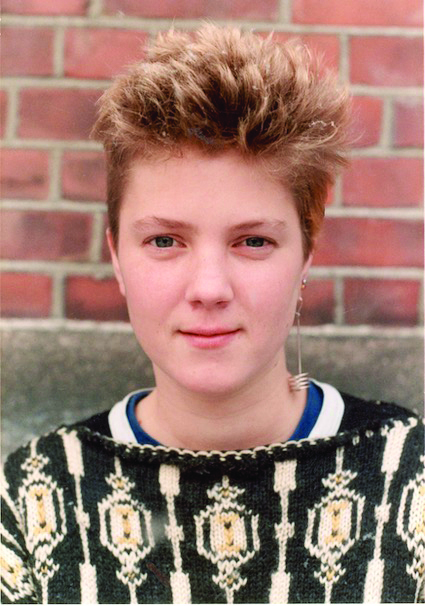 Oslo, Norway – Tonje Gjevjon was a girl who stuck out – not feminine enough and a lesbian, she worries that today she would have been transitioned into a boy. She writes in Feminist Currents “I was born in 1967, into a time of upheaval. Equality, the right to self-determined abortion, and equal pay for equal work were high on the political agenda. I grew up in a small town outside Oslo. My mother was considered uppity and my father a wuss because they were concerned about women’s right to an education and ability to make decisions about their own bodies and lives. … I was a daddy’s girl and tagged along with him as often as I could. … In 1974, on the first day of school, I wore a shirt, blue jeans, a wide black belt with a large buckle, and football shoes. At seven years old, I’d found my style and, to be honest, it hasn’t changed significantly since. As a child, I didn’t really reflect on who or what I was. My days revolved around school and doing things I was interested in and had a talent for. I loved playing football and ice hockey. … Because I insisted on having short hair, wore football shorts, and often ran around topless, I was regularly mistaken for a boy.

“Today, many would consider me a girl ‘born in the wrong body.’ But in those days, even though some reacted negatively to my being boyish, no one ever suggested I was actually ‘born in the wrong body. … But I was lucky. I lived through puberty during the best decade possible: the 80s – the decade when the world of pop music was characterized by androgynous women and men who used clothes, makeup, and hairstyles to express their image and personality. It was cool to have an image that broke with gender roles. …

“I’m a lesbian tomboy who grew up in an age where the concept of being ‘born in the wrong body’ didn’t exist. If I were a child today, I wouldn’t have stood a chance against trans activism. I can’t bear to think what might have happened if I had been assessed at the Karolinska University Hospital, which hosts Sweden’s largest gender identity clinic, or the Gender Identity Development Service (GIDS) at the Tavistock and Portman NHS Foundation Trust. In 2019, lesbians, women, and others who want to think and express themselves freely are arranging meetings in secret locations. … We are doing what we can to reclaim this right which the anti-democratic LGBTQ has managed to stifle across many parts of Western Europe and elsewhere. … I have never experienced such hate and anger towards lesbians talking about their needs and opinions until now. This is my story, my experiences, and my call for help. [Tonje Gjevjon is a visual artist, composer, and filmmaker. Translation by Kari Müller.] (Feminist Current – Tonje Gjevjon at Feministcurrent.com/2019/06/11/i-was-a-lesbian-tomboy-allowed-to-be-female-i-fear-young-girls-today-no-longer-have-that-choice/)

Too tomboy? – Tonje Gjevjon at 16 in the 1980s. Today she worries she would have been pressured to transition.