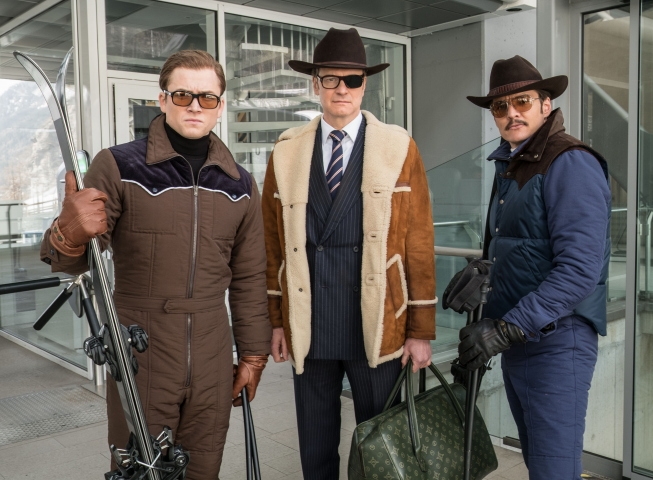 A bold new take on the action-spy film

Back in February 2014, 20th Century Fox released Kingsman: The Secret Service, a bold new take on the action-spy film, almost a modern version of the classic Bond films with eye-popping visuals, great action and music, irreverent humor, and a cast of mostly unknown actors (at least stateside) lead by Colin Firth and Samuel L. Jackson (that film also gave Sofia Boutella her first major screen role). Of course the scene that got people talking, and probably contributed to the film’s success, was the amazingly choreographed fight scene with Firth and a horde of people locked inside a church which, shockingly, ended with his character Harry Hart, aka Galahad (his Kingsman code name), shot in the head, right through the left eye. As Hart was truly the heart of the film, one had to wonder how they could do a sequel without him.

And it’s no secret that they did find a way to bring him back – very cleverly, to say the least – but perhaps it would have been better if his return had been a surprise, at least for opening weekend audiences (although there is another “surprise” appearance in the film that has been spoiled by this point). Nonetheless, even without that element of surprise at Harry’s return, Kingsman: The Golden Circle is still a winner for the most part, even if it is juggling one-too-many storylines.

The film opens with a magnificent fight scene to rival the original’s church fight, this time in the back of a cab between OG hero Eggsy (Taron Egerton) and failed Kingsman recruit Charlie (Edward Holcroft, who did appear in the first movie). From here, we also find that Eggsy is now in a serious relationship with Sweden’s Princess Tilde (Hanna Alström), a relationship that is frowned upon by Kingsman. While having dinner with the Swedish royal family, someone takes out every single Kingsman location, including Eggsy’s home, killing his best friend and his dog, leaving Eggsy and Merlin (Mark Strong), the only two surviving agents. Luckily there is a Plan B for them, and they discover a cousin agency in America, Statesman, so they travel to Kentucky – where their cover is a distillery – to try to find out who is responsible for the destruction. There, they learn Harry is still very much alive (thanks to Statesman locating him right after he was shot in a clever “flashback” moment) but not quite himself, and that the person responsible for nearly wiping out Kingsman is a woman named Poppy (Julianne Moore), a drug lord who has sequestered herself on an island fashioned after 1950s Americana since she cannot come home due to her occupation. She’s one of the world’s richest women but no one knows who she is because, well, she sells drugs.

With a massive chip on her shoulder, Poppy decides the only way she can truly become a househld name is to lace her drugs with a substance that at first gives users a blue rash, then causes them to dance uncontrollably before paralyzing them, eventually leading to their death. Of course, she has an antidote which she’s happy to deliver as long as the US president (Bruce Greenwood) meets her demands. He agrees to her demands, but secretly he just wants all the infected to die because, well, the world will be a better place without millions of drug users, regardless of if they are hardcore addicts or just casual users who need a little something to take the edge off, like his overworked Chief of Staff (Emily Watson). It then becomes the mission of the united Kingsman agents and the Stateman team to bring Poppy down (and don’t think there isn’t someone within Stateman who has other plans).

I loved the original Kingsman because it was so fresh and exciting and over-the-top. It truly was something original, brought from the pages of a graphic novel to the screen by visionary director Matthew Vaughn. He had a massive job in his lap in doing something that could equal that film with a sequel and he’s mostly succeeded. The opening fight scene is how you start a movie … but it also gives the rest of the movie a whole lot to live up to and for me this one just doesn’t have that same feel to it as the original, perhaps because a lot of what’s here we’ve already seen. The juggling of the storylines also is a bit too much with having to introduce the Statesman group (and Channing Tatum isn’t in the movie quite as much as you’d think he is from the ads), and hopping all over the globe to track down Poppy and the antidote, as well as dealing with getting Harry back to his old self. There is again another fight scene that is meant to top the church fight, but this time with only three people. There are some amazing camera moves here but after a while it gets to be too much, giving me a headache by the time it was done.

But, it’s still a fun movie. The original cast members fit back into their roles perfectly, and the new cast members are welcome additions, particularly Halle Berry as the Statesman version of Merlin, code name Ginger Ale (all of the Stateman agents have beverage code names), who wants to do more than just lend technical support. Pedro Pascal (Whiskey) has this spooky young Burt Reynolds look that I didn’t know if it was intentional or not, but if they ever want to make a movie about Burt’s life (or a Smokey and the Bandit reboot), he could certainly play the guy in his prime. Julianne Moore is terrific as Poppy, giving off a perfect 1950s housewife vibe while mercilessly killing – and I mean mercilessly – anyone who crosses her. And the “surprise” appearance of Elton John as her captive is a hoot, doing more than just a brief cameo, decked out in some of his signature outfits.

There really is nothing to complain about as far as the cast, the look of the film, the great use of music (including a terrific honky-tonk version of Cameo’s “Word Up”), the production design, gorgeous cinematography, and anything else in the film’s production. For me, it was almost like Guardians of the Galaxy Vol. 2 – too much of a good thing. There’s just too much packed into one movie in an effort to top the previous one, so it loses just a little bit of the charm of the original. There we were able to bond with Eggsy, Harry, Merlin and the other Kingsman agents. Here they get torn away from us (not even Roxy, who does make an appearance, survives the opening destruction which is a shame), and we don’t really get to know any of the Stateman agents except for Ginger, and one we think we know isn’t who he seems. So there is a little disconnect with the characters. Also the film ends on a scene that really made no sense as Kingsman and Statesman have merged, and Statesman has purchased a distillery in Scotland from which the new Kingsman headquarters will operate (because a tailor shop is silly in the Americans’ eyes). So why is there a new Kingsman tailor shop?

That being said, it’s great that they were able to find a way to bring Harry back, and I’d be more than happy to see the further adventures of Kingsman and Statesman, perhaps giving agent Tequila a little more to do next time and focusing more on a plot. In any case, Kingsman: The Golden Circle is one of the best action films you’ll see this year.