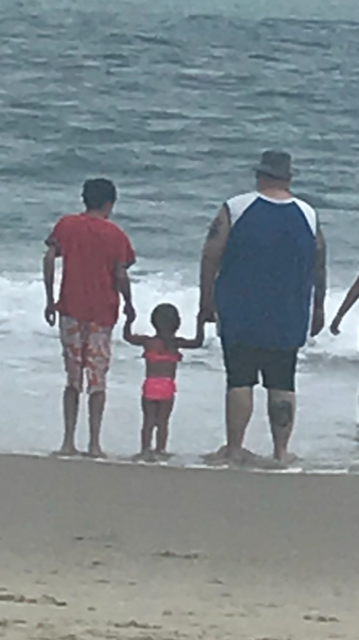 We took the kids on vacation last week and had a blast. We vacation at our family’s Ocean City beach condo that we’ve had since I was in college. It’s an easy, inexpensive trip for us. The kids enjoyed taking walks around the town, where there are millions of things to see. We all enjoyed the beach and playing in the sand. Cassandra especially enjoyed the water and finding sand crabs. We had good seafood and a lot of family time. It was great.

But, the trip didn’t start off as magically as it could’ve.

The first day, several of us headed off to the local grocery store to stock up. We usually bring most of our food with us but need to go to the store to get perishables, like milk. We don’t usually go to Ocean City in the middle of rental season, but this year was different. So unfortunately, when we hit the local grocery, so did a million other people. All the registers were open. And, all the lines were long.

We were all in a good mood as we did our shopping. We soon found everything we needed and headed to wait in line. We took advantage of the time to chat about what we wanted to do with our week. We commented on the tabloids on display. And, we listened to the conversation immediately behind us.

I don’t want you to think we were intentionally trying to eavesdrop. We weren’t. They were loud. There was a little boy, about three, who had obviously had enough of his day. He was whiny and complaining. Mom and Grandma were with him. And, instead of trying to distract or entertain him, Grandma chose to wander off and Mom began her threats. She threatened to put him straight to bed when they go back. She threatened to beat his bottom with her hand (an interesting bit of specificity, I thought). She ordered him to be quiet. She ordered him to stand up, sit down, and get in the cart.

All this time, all I could think was that it was late. I was tired, too. And, how would people react if I started to whine like that. And then, I got angry. I got angry at a mom who thought it was more important to yell at her child than to see if she could fix what was wrong. He’s a little kid. Little kids don’t do well after bedtime. Little kids don’t like waiting in lines. Little kids don’t want to look at a cart full of yummy food and be told they can’t have any. And, in case you haven’t figured it out by now, grown adults don’t like listening to moms make the same threats over and over and over again.

Why do parents seem to forget that kids are people, too? I’ll bet that mom wouldn’t want to be yelled at if she was having a bad day. I’ll bet that mom wouldn’t want other adults speaking to her the way she was speaking to her child. And, I’ll bet if she realized how horrible she sounded to the rest of us standing there, she would have been embarrassed. At least, I hope she’d have been embarrassed.

If I’ve learned nothing else about parenting over the last couple of decades, I’ve learned that talking with my kids, no matter how young, goes a whole lot further than yelling and punishing. In fact, I was talking with a young mom the other day, who openly admitted she spanks her children. She then looked to me for support saying, “It’s the only way to keep them in line.” I smiled and said, “I’ve never felt the need to spank my kids.” She had no idea how to respond. She saw my children being much more polite than her children and now knew that my kids achieved that goal without the benefit of having been spanked.

If the mom in the store had taken the time to talk to her son instead of yelling at him, I’m sure their shopping experience would have been a lot smoother. I’m not saying it will work every time. But, it will work more often than not. Teach your kids how to respond without anger, threats, or yelling by demonstrating those skills yourself. You’ll both be better for it.