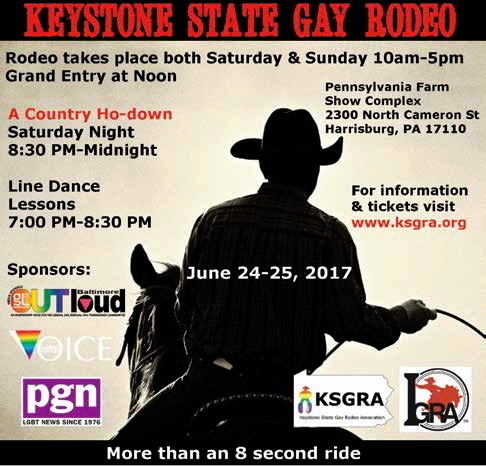 In 1996, Paula Cole once asked “Where have all the cowboys gone?” Mid-Atlantic residents won’t have to look far, as cowboys and cowgirls from all over will be galloping to Harrisburg to take part in the Keystone State Gay Rodeo this June. Baltimore OUTloud, a proud sponsor for the rodeo, recently chatted with International Gay Rodeo Association (IGRA) President Bruce Gros about the mission of the IGRA and the importance of maintaining the group’s longstanding role in the community.

“We have a couple of intertwined missions,” explained Gros. “Our first mission is to promote the sport of rodeo, regardless of background and without discrimination. We are open to anyone who wants to rodeo. The second part of our association is to constantly give back to our communities. We raise money to support those who need it and return it back to those communities. We take that very seriously.”

Gay rodeo’s beginnings date back to 1976 with the National Reno Gay Rodeo in Nevada. Over the next eight years local rodeo associations were formed in the states of Texas, Colorado, California, and Arizona. In 1985, these four associations along with Oklahoma founded the International Gay Rodeo Association (IGRA).

“I started working with the rodeo as a volunteer,” Gros relates. “I wanted to help support the effort to raise money for charity. I’ve never ridden as a competitor in the rodeo, but I’ve certainly ridden horses for leisure. As far as participating, I’ve always been on the production side.” Gros has been president of the IGRA since 2015.

The raw image of cowboys and rodeos continues today to stir inner emotions in mainstream pop culture about the sport. Gros explained that this assists the IGRA in continuing to preserve the history of rodeo. “Part of it comes from the fact that in the gay community, the icon of a cowboy or cowgirl is a potent image that isn’t going anywhere. It’s romanticized in many societies. Part of it comes from a strong connection to the land and interaction of human and animal. There is a certain simplicity and grounded-ness to the people who make up our rodeo family.”

Many are often surprised by the concept of gay rodeo and size of the organization. “I think a lot of times, outsiders to the organization, don’t think of gay people as being interested in that kind of lifestyle,” Gros continued. “They’re surprised by those sorts of athletic events and that our community may not be macho enough to compete. Or they don’t think people who are involved in those types of things could be gay. I think that’s the disconnect from a lot of people who don’t come from our perspective and don’t think anybody could be anything. The idea that everywhere, in every part of life, there has been and always will be gay people right alongside of them.”

Gros maintained that he sees the future of the IGRA as something that will continue to be very relevant for many years to come. “I think there are great opportunities for continued growth and development. We will always have a strong heart in our rodeo association. We will always be welcoming, no matter who comes through the door. You don’t have to be a competitor for years to enjoy it. You could be a ‘city-slicker’ who decides you want to embrace the values of this sport. You don’t even have to be gay or lesbian to be part of the rodeo. You just have to want to be part of our family. That message will never go out of style.”