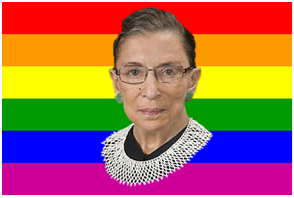 Ginsburg has long been a vocal supporter of marriage equality. Prior to the Obergefell decision making marriage equality legal across the land, Ginsburg was determined that the country was ready for it. Then, when the Supreme Court began hearing arguments for Obergefell, Ginsburg shut down every single one arguing against same-sex marriage. Not only does Ginsburg consistently support marriage equality constitutionally, but she also shows her support in practice. She has performed numerous gay weddings, as well as officiating a gay US ambassador’s vow renewals.

Most recently, Ginsberg penned a scathing dissent in the Masterpiece Cakeshop case, which narrowly found for a baker who refused to make a wedding cake for a gay couple writing: “When a couple contacts a bakery for a wedding cake, the product they are seeking is a cake celebrating their wedding ― not a cake celebrating heterosexual weddings or same-sex weddings ― and that is the service [the couple] were denied.”

She supported a 1996 decision that LGB people are a constitutionally-protected class. She joined the opinion in 2003 that finally saw the legalization of same-sex sexual activity nationwide in the US with Lawrence v. Texas. In Boy Scouts of America v. Dale, a 2000 case, in which the majority determined the Boy Scouts of American can exclude gay members under the constitutional right of freedom of association, Ginsburg joined Justice Stevens’s dissent.