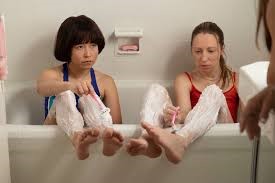 This week started out with my name change being signed, sealed, delivered back to me and ends with me leaving for a very, very (see the last four months of articles) much needed vacation. Sandwiched between those two wonderful events, is the gut-punch of the death of RBG and the absolute terror, uncertainty and overall dread that means for queer folks, women, and literally every other minority within our country’s borders. I found out Friday evening, and I just slid to the floor behind the desk and sat there staring at the wall for a chunk of time. I am almost certain I checked in a guest or two, and cannot remember if I spoke to them outside of a hello. The feeling of the floor crumbling out from underneath me has subsided in the recent hours, but if I was avoiding the news prior to Friday, I am absolutely disengaging, at least until my time with ocean waves and sandy beaches is over for the year.

The second season of PEN15 premiered this week. If you are unfamiliar, it is a hilariously awkward and realistically cringe-worthy depiction of middle school girls in 2000, when I was in the middle of my own seventh grade year. Anna Konkle and Maya Erskine star as their 12-year-old selves in honestly, the entire way that an adult looks back with horrifying embarrassment at their own adolescent self. If I am telling you a story about something I did in seventh grade, I am mentally picturing adult salt-and-pepper haired Asher wearing clunky boots and cargo pants that zipped off into shorts (my favorite pair was florescent orange) walking around my middle school with my peers. While this seems like a very random and bizarre segue, hang with me, I promise this is going to come together.

The first season of the show introduced the characters, and gave a neat introduction into what was going to be the clear themes of the show in subsequent seasons. Remember middle school? The time gender suddenly defined your social circle, and if you grew up female, you learned to hate your own body from the words of your peers long before you understood literally anything about it. When boys were free to be as crude and ignorant as possible, while girls suddenly found themselves expected to navigate an impossible tightrope between childhood and adulthood. Awkward school dances, and an entire social structure that did nothing but tear down the majority of us. Season two ups that ante and I know the timing was coincidental, but I cannot help but think there is a poignant correlation between this show and the reality we find ourselves in as we stumble and struggle to find a way out of our political conundrum.

RBG refused to live in a world where her gender sidetracked her ambition. After being denied a position as a clerk to the highest court in the country, she ended up becoming just the second woman to be confirmed for a seat on the bench. While sexism has moved to a more subtle and covert cog within our social structure than when Ginsberg was younger, there is still a vast difference in how we raise and treat each other that is entirely correlated by what we assume is in folks’ pants. Watching Maya’s character, (also Maya) react to her male peers making jokes about whether or not her crotch smells like the sea in full view of an apathetic coach was a visceral moment for me. Outside of my underpants, there are no longer any indicators that I am AFAB, but my memories are rooted in that assigned status. Middle school me knew that I was not like the other girls, but the combination of escalating hormonal changes within and the incessant teasing and prodding left me feeling like I had no choice. I could either have no friends and be ridiculed for dressing like a wannabe skater punk, or I could internally scream while outwardly fitting in with Tommy Hilfiger and entirely too short of shorts for anyone’s comfort.

RBG devoted her life to changing the system for girls like Anna, Maya and well, my former self. The idea that boys get to grow into men with impunity, while girls learn to become women through teasing, shame and resentment is what grows adult sexism. The same middle school boys that can openly discuss girls bodies with absolutely zero thought given to their words and how they affect their female peers grow into men who both want to regulate and control the reproductive rights of those with uteruses. If the pendulum swung both ways for both those who end up with an unwanted pregnancy and the person who contributed the sperm, there would be zero debate about whether or not we needed to protect Roe vs. Wade. Policing someone’s reproductive decisions and health is a one-sided conversation because it is controlled by those who would never find themselves in such a situation, because they have lived their entire lives on the beneficial side of how we treat our children according to their assigned genders.

RBG believed and fought for a world where the Maya’s and Anna’s of yesterday and today do not have to grow up in a world that teaches them nothing but shame and frustration about themselves, their bodies and their opportunities in the world. We might have a deck that is stacked against us, but that only means we need to fight harder. For a world where little girls and boys are not divided and given completely different sets of principles to govern their adult lives. For a world where being born with a uterus is not an automatic kneecap on the path to opportunity and achievement. I might be a man now, but I will never let my present take away the lessons of my past. I owe it to RBG, Maya, Anna, and Amanda.