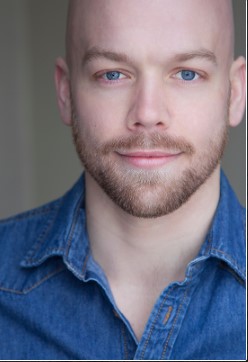 Jesus Christ Superstar, the iconic musical phenomenon, celebrates its 50th anniversary in a new mesmerizing production at the Hippodrome this month. Running until Sunday, December 22nd, the musical’s story is loosely based on the Gospels’ accounts of the last week of Jesus’s life, beginning with the preparation for the arrival of Jesus and his disciples in Jerusalem and ending with the crucifixion. It depicts political and interpersonal struggles between Judas Iscariot and Jesus that are not present in the Bible. Baltimore OUTloud recently chatted with ensemble member Jacob Lacopo.

“This [rock opera] is exciting in itself, but this specific 50th anniversary production gives audiences the experience of going to a rock concert along with a very ‘dance-heavy’ show.” The Illinois native related how thrilled he is to be part of this production. “For me, it’s a dream come true. To be a working actor is a privilege because so many talented actors aren’t working. The next level is to then be part of a production that you really believe in. From the very first week of rehearsals, we all looked around and said that we are part of something really special.”

Lacopo added, “To be working and collaborating with other artists with really clear visions, and to be elevating ourselves through this company, is very special.” The artist noted how much the ensemble, of which he’s a member, is pivotal in telling the story. “That really hasn’t been done before,” he says of past Superstars. “We are dancing in this production far more than you ever saw in Superstar before. The ensemble carries the through-line of the story through movement and intention. We, ourselves, aren’t playing characters. It’s a very non-literal storytelling and you see it through the many variations along the ways that ultimately ends with Christ’s crucifixion. Audiences will see the transitions from followers of Jesus who went from being intrigued to following him, to rioting and ultimately turning on Jesus and insisting he be crucified by the law.”

Jesus Christ Superstar remains a fan favorite after half a century. “People respect Superstar as one of the greatest rock operas of all time. The original concept album, which was the source material for the stage production of Superstar, is known to people from all walks of life around the world. You don’t have to know anything about musical theater to appreciate this music.”