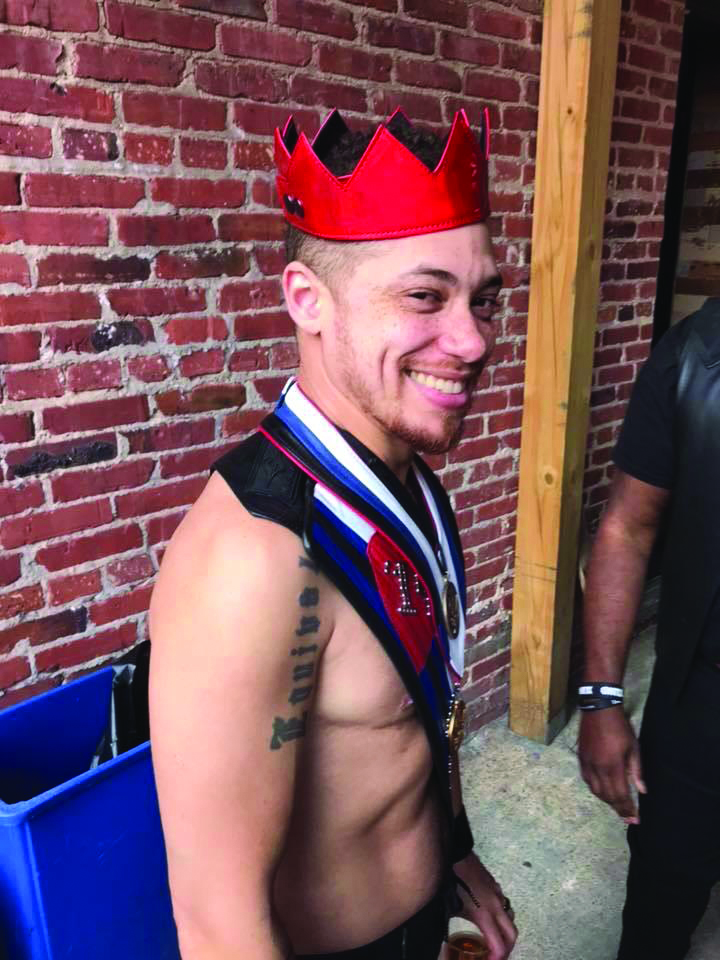 Leatherman of Color 2019 Jack Thompson, who resides in Baltimore and is an employee of the Baltimore Eagle, was awarded the title of International Mr. Leather 2019 during the 41st annual IML held in Chicago over the Memorial Day Weekend. Mr. San Francisco Leather 2019 Jawn Marques was first runner-up, and Mr. Leather Ireland 2019 Fionn Scott was selected second runner-up. On Sunday, May 26th the crowd at the Baltimore Eagle, who were watching the contest in Chicago live via social media, erupted when Jack was announced as the winner. The title of International Mr. Leather is the biggest title in the leather community. This year’s contest saw 68 contestants with many from outside the US. Also taking home the gold was Kriszly de Hond from Amsterdam, Netherlands, who was sashed International Mr. Bootblack 2019 with Geoff Millard who represented his formed home state of California, but currently lives in Baltimore selected first runner-up. Sparkie from Waukesha, Wisconsin was awarded second runner-up in the bootblacking competition which included a speech category this year.

Jack Thompson became the first transgender man of color to be selected IML. In 2010 Tyler McCormick of New Mexico, who is also a trans man, was selected International Mr. Leather 2010.

As I’ve written before I have a love / hate relationship with social media. I love seeing pictures of my leather friends from all over the world. It makes me feel that I haven’t lost them even if they live in France or Australia. Facebook is a great way to keep in touch and to promote events. Recently I enjoyed seeing pictures of the Leather Men of Spain hosting a formal leather dinner as it happened. Unfortunately, there is another side of social media: the trolls and the haters. I usually do not write about negative things in this column. My goal is to promote my beloved leather community in a positive way.

We all know what is going on in Washington and how in the last few years it seems that there are many in our country who would like to see all the accomplishments and advances made by the LGBT community in the last 50 years erased. It makes me sad and angry. However, what really upsets me is when the haters are part of the LGBT community and even within the leather community. Recently the president of the Southeast Conference of Clubs, an umbrella organization for many of the leather clubs in the south, expressed his displeasure with this year’s selection for International Mr. Leather with transphobic comments on Facebook. Thankfully the leather community was quick to defend our brother Jack, who has made us all proud. Eventually this leather club president was removed from his position – but wow! We have met the enemy and they are us.

The leather community is a family. That is why I love the community so much, it has been 50 years since Stonewall, but the fight is far from over.

On a brighter note, on Saturday, June 1st the Mid-Atlantic leather community turned out in force to congratulate International Mr. Leather 2019 Jack Thompson at the Baltimore Eagle. (I was happy that I saw him on the night before his victory party and got to congratulate him before the crowds gathered.) The celebration started at 4 pm with a cookout, dance music, and lots of happy people. By 10 pm Jack had to leave to head to Asbury Park for New Jersey Pride on Sunday, June 2nd.

For those who are regular readers of this column, you know that I interviewed Jack back in February at Leon’s and was captivated by the life story of this warm and charming man. (You can see that interview at Baltimoreoutloud.com.) Little did I know that I was spending an evening with the next International Mr. Leather. When he won I felt like I won. In fact, when Jack Thompson was selected International Mr. Leather 2019, we all won!