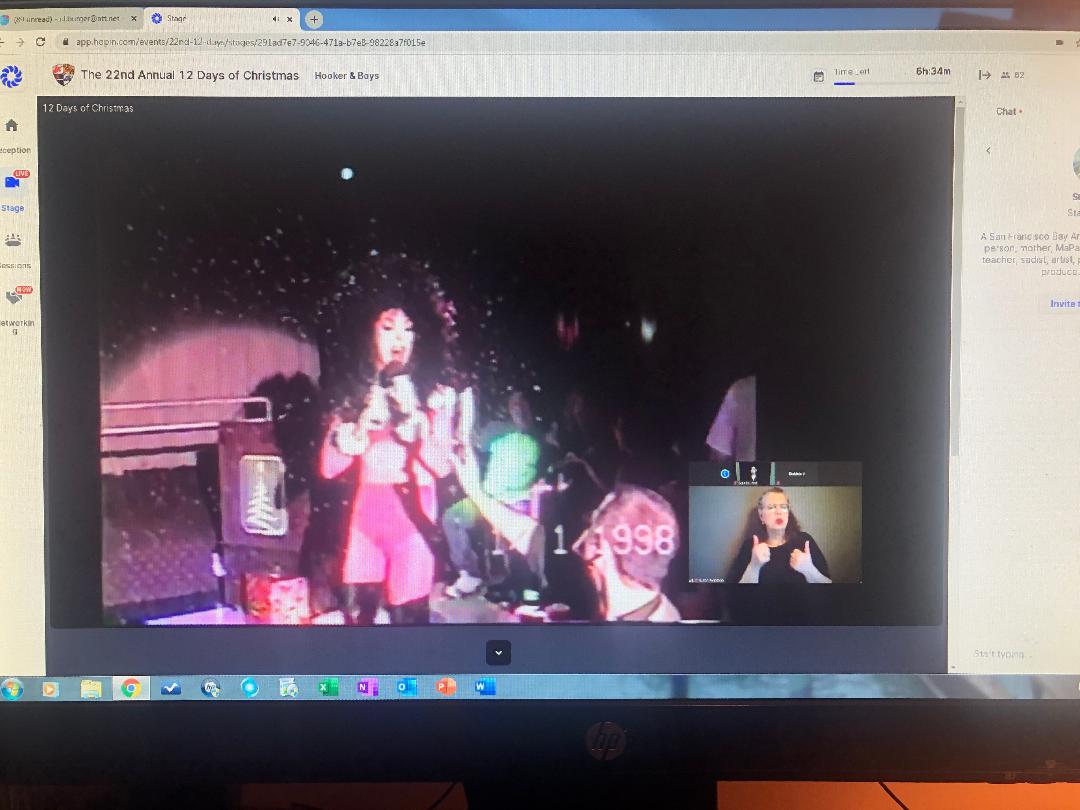 The leather community is all about traditions. Even in my personal life, I have many traditions that I look forward to each year. I moved to Baltimore in 1984 and never miss the city’s annual St. Patrick’s Day Parade. I always go downtown to celebrate on Oriole’s Opening Day. Even if I don’t have a ticket for the game, I love the festive block parties, live bands, and crowded bars. If it is MLK weekend in DC, it is time for the huge Mid-Atlantic Leather Weekend (MAL), Memorial Day weekend means the International Mr. Leather Contest in Chicago and the weekend before Memorial Day weekend is Leather Weekend on Fire Island produced by Excelsior MC. (I made my reservations early in 2020. This event sells out.) The first weekend of November is COMMAND MC’s Maryland Leather Weekend followed by the DC Eagle bar’s anniversary and contest. On the first Thursday in December Baltimore’s Washington Monument is turned into the city’s biggest Christmas tree. This annual kickoff of Christmas in Baltimore is called “The Monumental Occasion” and includes all kinds of food stands, live music, and fireworks. It gets bigger every year and really brings the city together in a joyous celebration. Of course, I go downtown early and meet many of my friends at Leon’s for happy hour and we walk over to the event. I always joke that I like to be lit before the monument. The first Saturday in December brings the ShipMates’ Daddy Christmas fundraiser followed by the very popular 12 Days of Christmas Show and fundraiser produced by Hooker & Boys on the second Saturday of December. For 21 years this extravaganza has packed a room with every drag queen and leather titleholder in the Mid-Atlantic area for an all-day show, big silent auction, and pictures with Santa and Mrs. Claus. Plus, it is a chance to hug friends and wish them happy holidays! 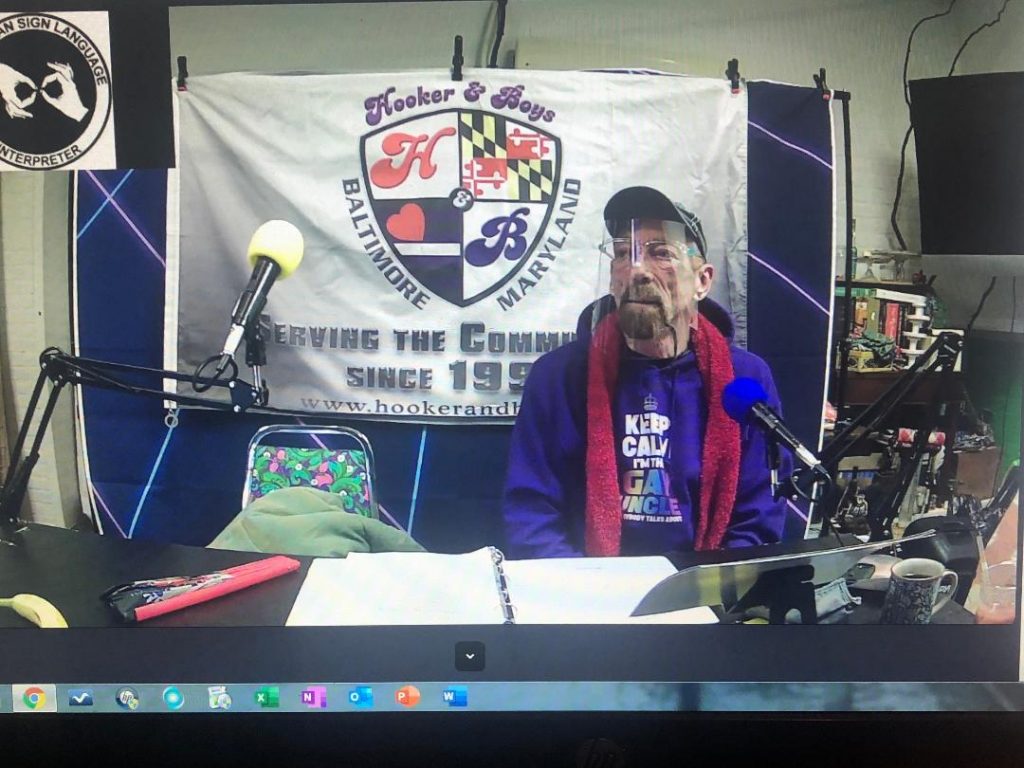 I’m sure you can guess where I’m going with all this. In fact, I’m going nowhere. Thanks to COVID-19 all the above traditions and many more were broken in 2020. Although MAL happened in January 2020, it will not be taking place in January 2021. The only events that have taken place since late March have been virtual. Virtual leather club’s bar nights, virtual BDSM seminars, virtual leather club meetings, even virtual leather contests are the “new normal.” (I hate that term!) Nothing says fun like sitting in front of your computer, staring at your screen, and drinking a beer by yourself.  I applaud the folks at Macy’s in New York City for trying to make it look like they were having a Thanksgiving Day Parade and I applaud Rik Newton-Treadway and Shawnna Alexander for hosting a virtual 12 Days of Christmas Show. Like Macy’s, it would have been easier to just cancel like everything else this year. (There will be no Tournament of Roses Parade or Mummers Parade on New Year’s Day.) On Saturday, December 12th Hooker & Boys presented the 22nd annual 12 Days of Christmas: “It’s A COVID Kind of Christmas.”  Unlike Broadway, this show did go on. 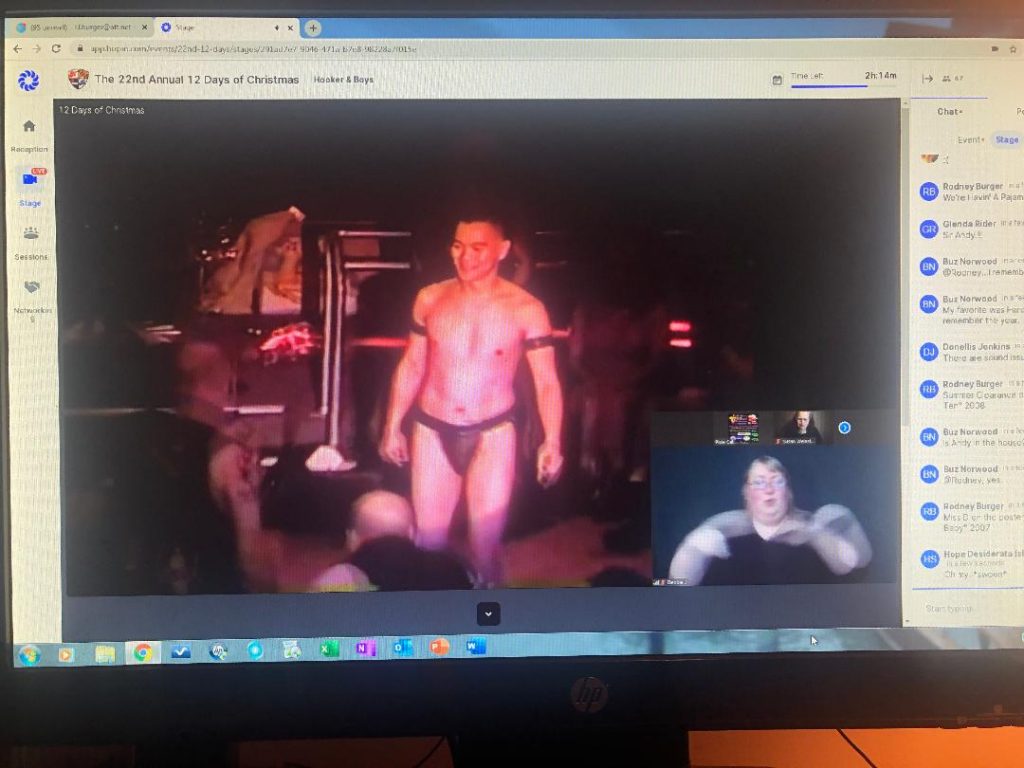 12 Days tickets were sold for $25 and “attendees” were sent a link for the production. This year’s show and large auction that was held virtually on the website 32auctions benefited AIDS Action Baltimore, The Queen’s Guard of Alaska, Leather Heart Foundation, and the BHT Foundation. Sitting live at a table at Baltimore’s Clifton Pleasure Club and assisted by stage manager Pixie Cat, Rik and Shawnna introduced a retrospect of filmed performances from 12 Day’s shows over the past years. It was very nostalgic to see a packed Club Hippo (now a CVS) beautifully decorated for Christmas. I felt like I was being escorted by the Ghost of Christmas Past as I was shown not only a world that no longer exist, but also many of my friends who are no longer with us were seen performing and enjoying the show. You could tip the performers using PayPal or the QR Code at the bottom of the screen. How melancholy to see my dear friend the late Queen of Pride Jennifer Andrews (AKA Jeff Murphy) looking fabulous and working the crowd. Much like Ebenezer Scrooge, I even saw a younger version of myself performing “The Internet is for Porn” from the Broadway show Avenue Q with my fellow ShipMate Club brothers. There were also performances from COMMAND MC, Chi-Chi Ray Colby, Steve Jackson, FIST, D’ Marje’, ONYX Pearls, Lauren Mitchell, Jasmine Diamond, Lady Desire, Marshal Roberts, Sir Andy Chmielowski-Liu, Rosie, Glenda Ryder, and many more. The haunting and beautifully sung opening number by Ms. New Jersey Leather 2016 Christy Lee who performed Idina Menzel and Jonas Myran’s “At This Table” had me close to tears and featured Vi Johnson from the Carter / Johnson Leather Library and the “library kids” around a dinner table. The show lasted from 2 until 7:45 pm but I’m sure no one complained. They had nowhere else to go. This year the only line in the bathroom was the one around my tub. There was an ongoing chat on the side of my computer screen where I could interact with some of my friends who were also watching. It wasn’t the same as seeing them in person and hugging them, but it was something. A virtual life isn’t wonderful, but it is better than nothing. Happy holidays!