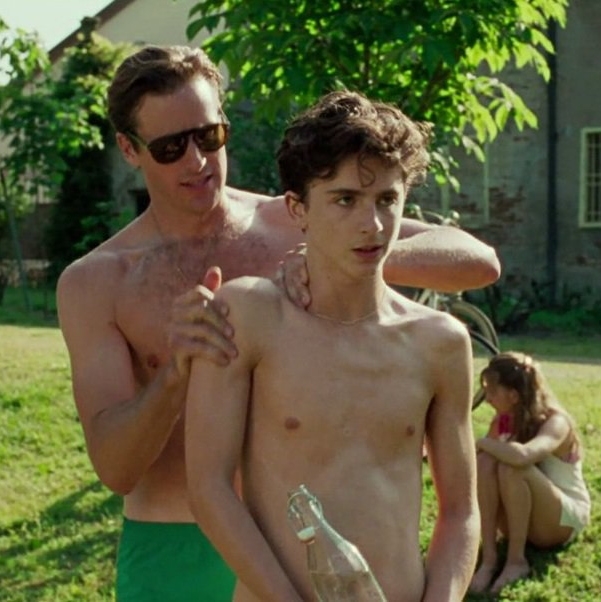 A new film is getting a lot of buzz right now not only for its awards possibilities, but for its subject matter as well. Call Me By Your Name, based on the novel by André Aciman, stars Timothée Chalamet (also getting notice for his role in Lady Bird) as Elio, a 17-year-old living in a small town in Northern Italy with his parents. His father (Michael Stuhlbarg) is an antiquities and archeology professor, and each summer for six weeks the family hosts a visiting grad student to help with the professor’s research. This year’s chosen one is Oliver (Armie Hammer), a bit of an “ugly American” who appears grateful to have been chosen but still sets himself apart from the family. Elio is none too pleased to have to give up his bedroom to the guest and his “Later” when departing for town or whatever else he’s doing grates on Elio’s last nerve.

While Elio embarks upon a tentative romance with a local girl, he begins to see Oliver in a different light, and he’s not sure how he feels about the man or how Oliver feels about him. At times he seems to be dropping hints to Elio, but then he runs off with another local girl, dancing with her and making out in front of Elio. Is he trying to make the boy jealous, or trigger something in him to get things moving along? Elio does finally screw up the nerve to make a move on Oliver, and while receptive he also tells Elio that perhaps this isn’t such a good idea. But there is definitely something between the two that develops over those six weeks, but did they waste too much time playing with each other’s, and their own, emotions?

Call Me By Your Name exists in its own little world in a barely inhabited town (it’s summer so everyone is away) and it has the feel of a foreign film, one in which the director favors panning away from the action to an open window (it’s a little cliché on that count). For a film that’s ripe with sexual desire, the imagery is rather chaste with only a few brief flashes of nudity and no lingering shots of sexual activity aside from some heavy kissing and off-screen grunts and moans.

While the story takes its time to move things along, it gives us time to really invest in the characters and the actors’ performances. Chalamet is remarkable as Elio. He has that perfect petulant teenage thing going when we first meet him, particularly as he deals with giving up his room to this stranger, but as he becomes intrigued with Oliver, his character changes and we feel his desire, his hesitation, his confusion by what he’s feeling for Oliver. Anyone who has wanted to be with someone without knowing how that other person might feel in return can certainly identify with Elio, and Chalamet gives an honest performance that all comes to a head in the film’s final shot, wringing every bit of emotion out of that moment.

Hammer’s character is a bit more frustrating because we never really know until much later in the film if he’s toying with Elio, if he’s exploring his own sexuality, or just where he stands at all. He comes off as very aloof – even though he also appears to be dropping hints that he is interested – but finally drops his guard as the two grow closer. But while Elio is definitely falling in love with Oliver (or what he thinks is love), Oliver may still just be seeing this as a summer fling because he knows it will come to an end once his six-week stay has passed. Perhaps he senses Elio’s deep feelings and wants to keep just enough distance to not completely destroy the boy when he does leave.

Stuhlbarg gives a performance just as good as the one he’s giving in The Shape of Water. As a father, he (and his wife) demonstrate their love of family, particularly around the dinner table and during a time when the mother is reading, and translating, a story. But he’s also focused on his work, sometimes putting that and Oliver above Elio but also allowing Elio to tag along to visit a new excavation, unaware – or not – that Elio simply wants more time to spend with Oliver. Towards the end, Stuhlbarg gets to deliver a touching monologue to Elio that reveals his knowledge of the relationship his son and his guest have and some more surprising details about his own life. It’s a wonderful moment and Stuhlbarg makes the most of it.

The film has come under fire from some, especially in our current climate of sexual misconduct charges, for depicting a romantic and sexual relationship between a 24-year-old and a 17-year-old. Perhaps it’s just an American thing. I think you have to put the situation in the proper context. The movie takes place in 1983 in Europe. Sexual mores were certainly different back then and Europeans are more sexually open than Americans. Also take into account that the age of consent in Italy is 14, so a 17-year-old isn’t really breaking any taboos by engaging in a relationship with a 24-year-old. And the teen pursued the older man, and the relationship was completely consensual, so the teen was certainly not being used or exploited (and perhaps that age difference was the reason Oliver, the American, took so long to allow himself to become involved with Elio). Regardless of the age difference, anyone who has experienced this moment of “first love” from afar can identify everything Elio is experiencing.

As I said, the film takes its time telling its story, but the scenery is beautiful (as are the two leads) and the performances will draw you in to the story. Call Me By Your Name may not be for everyone, but it’s worth seeing for the work of Chalamet, Hammer, and Stuhlbarg.