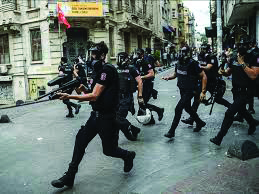 Organizers of Istanbul LGBT Pride Week had hoped the march could go ahead despite authorities banning the event for the last five years. Police allowed people to gather in a side street as organizers read a statement, according to Turkey-based Bianet. But riot police then used shields and fired tear gas to disperse the crowds, local media reported. Police also closed off streets.

“These walks have become more and more difficult every year, and since we’ve been faced with hate, we’ve been able to keep ourselves safe for the LGBT and to open up our voices” a statement from Istanbul LGBT Pride Week said. “Unlike these peaceful provocations, the state’s hate crimes have become visible to police brutality.”

Istanbul Pride had taken place every year since 2003. And, the event in 2014 brought a record number of participants. It was one of the largest pride events in the majority Muslim region.

Organizers, meanwhile, in a statement said “The hostility towards LGBT community has even become a state policy.” The statement said they would not abandon the struggle. “We are here! Get used to it – we are not going away!” (Gay Star News – Rik Glauert at gaystarnews.com/article/police-tear-gas-pride-marchers-in-istanbul/#gs.m9599b)