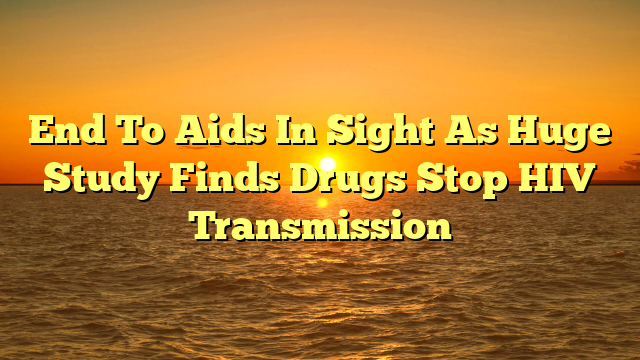 London – A study of gay couples published on May 2nd in the medical journal Lancet indicates that HIV-positive men in whom the infection is fully suppressed by anti-retroviral drugs have no chance of passing the virus to their partner, even through sex without a condom. The UK Guardian reported on the findings with the headline declaring “End to AIDS in sight,” and noting, “The success of the medicine means that if everyone with HIV were fully treated, there would be no further infections.” Earlier studies, the report noted, have shown that the drugs also stop transmission in straight couples where one partner is HIV-positive and the other is negative.

According to the paper in the Lancet, 972 sero-discordant gay couples were enrolled in the study from September 2010 to July 2017, and the HIV-positive partner was receiving treatment to suppress the virus, there were no cases in which the HIV-negative partner was infected through condomless sex with his partner. There were 15 men who contracted HIV during the study, but DNA testing proved they were infected through sex with someone other than their partner.

Co-author Alison Rodger of University College, London, called the results “brilliant, fantastic,” telling The Guardian that the study “very much puts this issue to bed. … Our findings provide conclusive evidence for gay men that the risk of HIV transmission with suppressive [antiretroviral therapy] is zero. Our findings support the message of the international U=U campaign that an undetectable viral load makes HIV untransmittable.” Rodger added, “This powerful message can help end the HIV pandemic by preventing HIV transmission.” According to the Centers for Disease Control, at the end of 2016, 1.1 million people aged 13 and older had HIV infection in the US, including an estimated 162,500 people – 14% – whose infections had not been diagnosed. Globally, there were approximately 36.9 million people worldwide living with HIV/AIDS in 2017, according to HIV.gov. Of those nearly 37 million people, and only about 75% were aware of their HIV-positive status. (Dallas Voice at Dallasvoice.com/the-end-of-aids-study-suggests-drugs-fully-suppressing-hiv-can-stop-transmission)