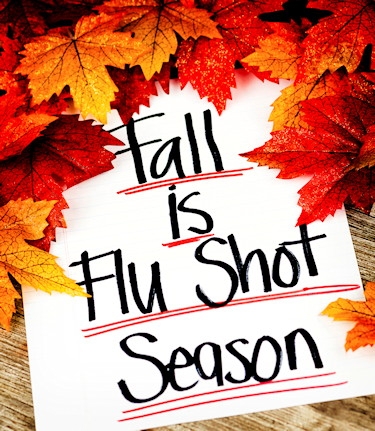 From September to December each year, nurses give more shots than all other times of the year put together, and we absolutely love it. There’s just something very satisfying about being the agent of prevention and keeping people safe from influenza because the flu is serious stuff. Over the past ten years an average of 32,743 deaths have occurred annually in the United States due to influenza. We nurses think that’s not something to sneeze at (pun definitely intended), at least when a simple vaccine can prevent the flu.

Even still, many people refuse flu vaccine saying that the flu shot gives them the flu. Let’s be very clear here – that is scientifically impossible! Injectable flu vaccine is made from dead virus; it is not possible to be infected by a dead organism. A dead mosquito can’t bite you, and a dead flu viron cannot infect you. Infection is caused only by live and reproducing organisms.

Some people, however, may experience a day or two of inflammation after getting a flu vaccination. This is a sign that the vaccine is working by making your immune system go into overdrive to produce antibodies to the flu. Those antibodies are what protect you from actually getting influenza infection. That inflammation may make you feel not quite up to your usual self, but it will be mild and short-lived and should not last longer than 24 to 48 hours. Other people may coincidentally get an infection from some other organism around the time of getting a vaccine that has nothing to do with the vaccine. The most typical organism associated with cold and flu symptoms (upper respiratory symptoms, runny nose or congestion and coughing), is Rhinovirus.

Then some people may coincidentally get a strain of the flu virus that was not targeted in the vaccine they received. There are literally thousands of strains of flu that mutate and evolve from season to season. Each year the the producers of flu vaccine use data from the previous year’s flu season to predict up to four strains that will dominate the coming year’s outbreak. With current technology, the vaccine cannot provide protection to all strains of the flu virus but at most to only about four strains. This is called quadravalent vaccine. Theoretically then, someone may, following a flu vaccine, coincidentally become infected with one of the other thousands of flu strains. Again, this is coincidental and has nothing to do with the flu vaccine that was received.

Anecdotally, I’ve received the flu vaccine for the past 20 years; it’s required as a public health worker. I’ve only gotten the flu one time in those 20 years, obviously to a strain for which I wasn’t protected by that year’s vaccine. I say those are very good results, and I wouldn’t even consider not getting the yearly vaccine. Getting the flu just that one time made me know that I want to take advantage of anything I can so I don’t get the flu again. Let’s just say it was no fun at all.

So, let me point out the obvious – we can put a man on the moon, but we can’t provide universal protection against all strains of the flu virus. At least not yet. Researchers from several institutions here and abroad are working on a universal flu vaccine and say that they are making exciting headway. Reported this month on Sciencedaily.com, scientists are working on a vaccine that will teach the immune system to detect and destroy a portion of the virus that remains the same throughout all strains and mutations of the virus. This has the potential to end yearly flu vaccination. In theory then, a person could be vaccinated once for life – good news for all of you that refuse flu vaccine because you hate shots. Speaking of shots, for those of you who have been using Flumist to avoid shots, the Centers for Disease Control and Protection are not recommending Flumist this year due to poor efficacy.

Now I must do my nursely duty and urge you to get your flu vaccine. The sooner you get it, the sooner you will be protected against this year’s targeted strains. Get a shot, and make your nurse’s day.

Debbie Anne is a Public Health Nurse with Frederick County Health Department in Frederick, Maryland and has particular expertise in the field of HIV/AIDS. She has served in the field for thirteen years and in 2014 was awarded a Governor’s Citation for her work with Marylanders living with HIV/AIDS.