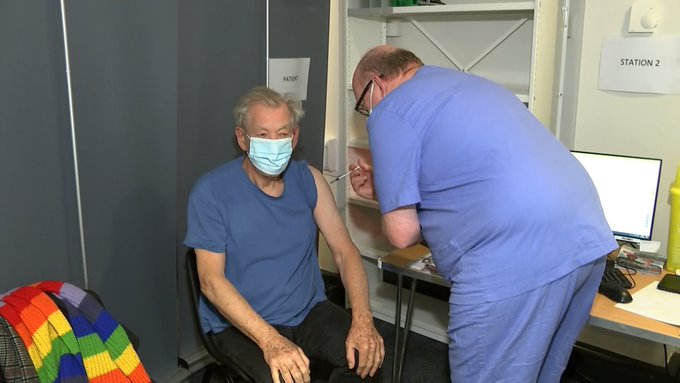 London, England – Actor Ian McKellen, 81, is among one of the first to receive the Pfizer COVID vaccine. The gay star of movies including The Lord of the Rings and the X-Men franchises received his jab Thursday, December 17 at Queen Mary’s University Hospital in London. Local media outlets filmed him being injected. “Anyone who has lived as long as I have is alive because they have had previous vaccinations,” he said, reports the BBC. “It’s a very special day, I feel euphoric! “I would encourage everybody to do the sensible thing, not just for themselves but for everybody else because if you’re virus-free that helps everybody else, doesn’t it?”

The UK was the first country in the world to approve the use of the vaccine. The country’s National Health Service began offering immunization to people aged over 80, along with healthcare workers, last week. In its first week, the NHS has immunized over 130,000 people. All of them will require a second, booster dose approximately 21 days after their first dose.

McKellen also praised the UK’s NHS, telling ITV he wanted to give its workers, “a big hug.” “Next time I come, well no, six days after I next come I’m going to give them all a big hug – is that allowed? I don’t know.” Those receiving the vaccine are expected to reach maximum immunity a week after their second jab, with trials of the vaccine finding it around 95% effective. “That’s the real bonus of all this, to watch and see what works in this country and what doesn’t work – and it seems to me the NHS is right at the top of the list for institutions that do work,” said McKellen. The FDA has now approved the use of the Pfizer vaccine in the US and batches are being distributed around the country. Healthcare workers and those in long-term care facilities will be the first to get the vaccine, with the rest of the population following in 2021. (Queerty – David Hudson at https://www.queerty.com/ian-mckellen-euphoric-receiving-covid-vaccine-uk-20201217?utm_source=Queerty+Subscribers&utm_campaign=293f49501c-20201217_Queerty_Newsletter&utm_medium=email&utm_term=0_221c27272a-293f49501c-431876119)