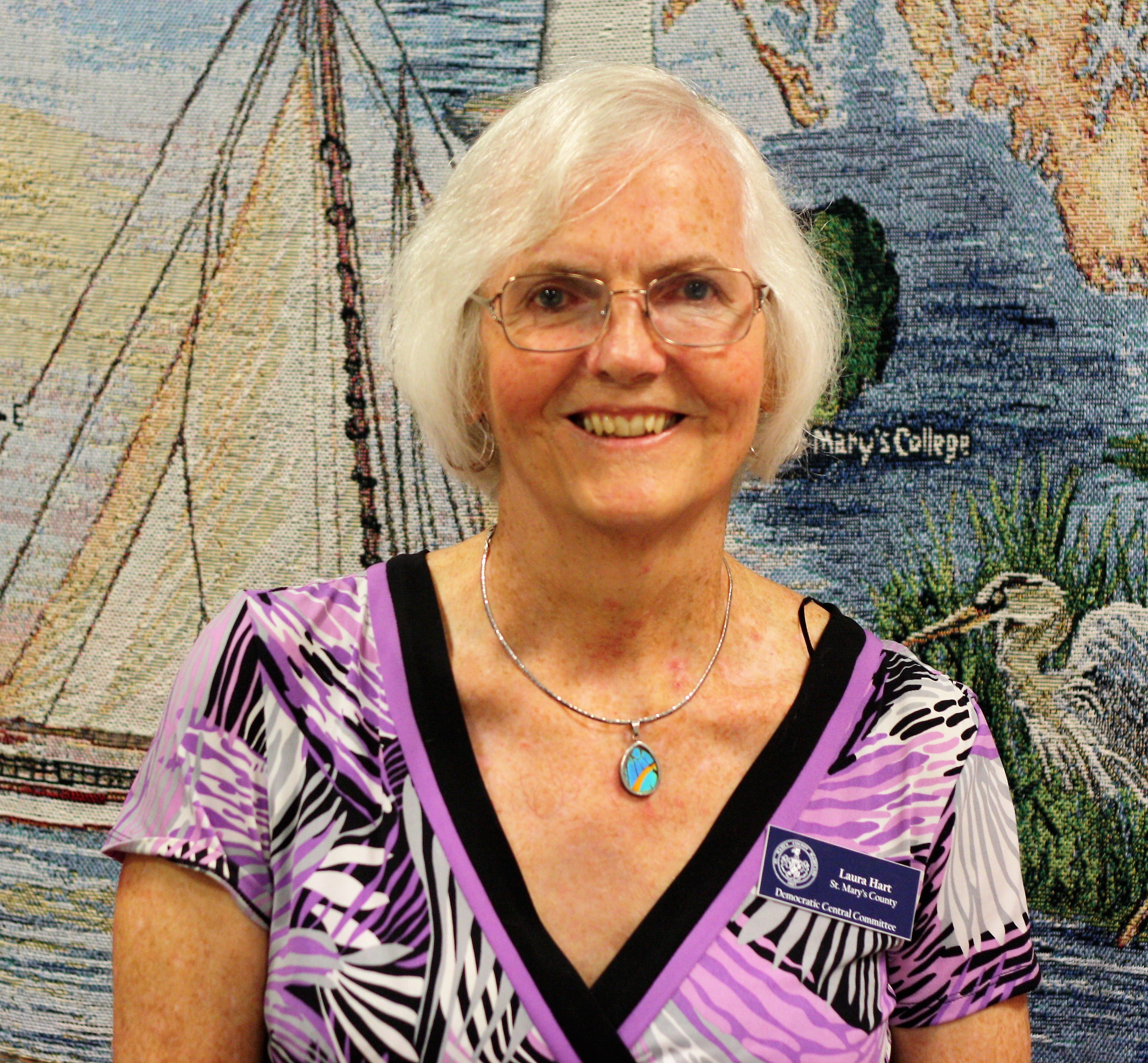 In this past June’s primary election, LGBTQ people achieved several firsts. This included two transgender people being elected for the first time to official office in the state of Maryland. One of those two is Laura Hart, who was elected to a seat on the Democratic Central Committee for St. Mary’s County in southern Maryland.

Hart retired from her job as a civilian computer engineer and engineering manager for Naval Aviation after 34 years in September 2006. She currently serves as the chair of the St Mary’s Democratic Club’s voter outreach committee, which is creating a precinct captain program in all of St. Mary’s County’s 36 precincts, specifically focused on canvassing.

Bill Redmond-Palmer: Tell me a little about your life growing up.

Laura Hart: I grew up in Upper Darby, a close in suburb of Philadelphia. I graduated with bachelor’s and master’s degrees in electrical engineering from Villanova University. I went to work for the Navy in Bucks County, Pennsylvania, after college. My job moved from the Philadelphia area to Patuxent River Naval Air Station in 1996. At the time, it seemed like a disaster, but ended up being fortuitous for my career, as well as my post retirement interests.

I grew up in a political family. My mother’s oldest brother held appointed offices as a judge and as deputy attorney general for maritime law in the Truman and Eisenhower administrations. Her youngest brother, her twin, was the youngest person elected to the New York City Council at the time of his election. It was during his campaign that I, as a seven-year-old, first got canvassing experience going door to door with my Aunt Mabel.

You were recently elected to the Democratic Central Committee for District 29 for St. Mary’s County. What are some of your goals and priorities for your term of office?

My principle reason for running was the real lack of activism on the part of the members of our former Democratic Central Committee. I don’t think they really appreciated grassroots activism, in fact some members were even hostile to the idea. I also believe that they may have been intimidated by all the energy coming out of the disastrous 2016 election.

I learned a lot of lessons about grassroot activism volunteering with National Center for Transgender Equality and the National LGBTQ Task Force at the federal level, as well as Equality Maryland at the state level. I also gained invaluable experience and learned about the political ground game from the gold standard of ground games, as my county’s canvassing coordinator for 2012 Obama for America, knocking on as many as 600 doors in about four months.

St. Mary’s is a very conservative area. Although the difference between registered Republicans and registered Democrats is small, some of those registered Democrats haven’t voted Democratic since the 1970s. In 2014 for example, Democrats lost every contested election. I am totally committed to activating our grassroots to go out and knock on doors to remind people that there actually is a Democratic party in St. Mary’s County. I want to build a lasting volunteer network that can last across electoral cycles and maybe convince some of them to step up and run for office themselves.

You’re one of the first transgender people to be elected to an official office in Maryland. In your case, it was in a very conservative county. How does this impact your work, or the political landscape in the state?

I quite honestly have no idea. This is a very conservative area. In 2016, Make America Great Again (MAGA) signs looked like our principal farm product. Most Fridays up until the election, there were a group of guys on Route 5 just north of Route 6 flashing their MAGA signs, standing in front of their stars and bars flag. I basically just live my life. I never hide my trans identity, but it rarely ever comes up. Maybe it will going forward, I don’t know. What will be, will be. I have a very specific mission and I’m just going to keep plowing forward.

My first major grassroots effort was supporting the signature challenge against the petition to put Montgomery County’s gender-identity anti-discrimination ordinance on the ballot in 2008. I spent about four-and-a-half months poring over signature lists, and we were ultimately able to successfully challenge half the signatures the opponents of the ordinance had collected, defeating their efforts.

Following that, I spent the next two years volunteering with the United ENDA (Employment Non-Discrimination Act) Coalition. As a retired computer engineer, my principle role was to maintain the database and the web page, but at surge periods when we wanted to visit as many congressional offices as we could, I had the opportunity to develop lobbying experience, an activity I genuinely enjoy and love.

I also volunteered with Equality Maryland and served for a time on their board. In addition, I volunteered with the Mautner Project, which provides social services to lesbians and their caretakers battling serious health issues, and was on the planning committee for the First Capital Trans Pride.

What’s the work that you’re most proud of?

When you have a touch of OCD, you do tend to get volunteer awards! The two that stand out for me are the 2009 Engendered Spirit Award from Capital Trans Pride and the 2010 Volunteer of the Year for Mautner Project. The first was recognition from my community. The second was for service to people in great need.

What is one thing you have learned in your 12-plus years of service to the LGBTQ Community that you think would be helpful for the community to know?

My biggest take away is that we trans people must speak with our own voices. It may seem comforting to be part of a larger LGBTQ community, but our voices get drowned out, and our priorities are often shunted to the side. I think the rhetoric around the Equality Act that is currently before the US Congress has been totally inclusionary. It’s easy to stay pure when it’s just rhetoric. What happens when there is a chance to pass the Equality Act? Does the rhetoric hold true or does history? I believe that trans people need to demand the former and scream bloody hell if the latter comes to pass!