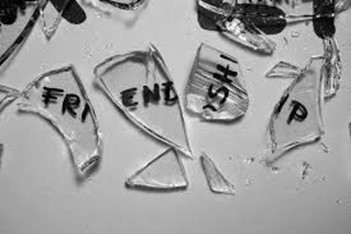 The closer we get to the election, the more the feelings of anxiety and dread creep into my mind. I remember a similar experience in 2016. While I never really expected the outcome of that fateful Tuesday in November four years ago, the sheer fact that America had not turned its collective back on the platform that supported bully-tactics and insults not appropriate for a playground setting; gave me an uncomfortable gnawing within my soul that a chasm within our societal conscience was opening.

The rise of our current political predicament came at a time in my life when I was reckoning with a disappointing, and certainly unexpected situation of my own. When you start the process of understanding/accepting that you are trans, there is one of many moments where the “who might turn their back on me when I come out/begin actually transitioning,” thoughts naturally begin to rain down through your brain. While I am relieved that the majority of the people whom I erroneously assumed would take an issue with my coming out did not, I absolutely did not expect someone I called my sister to do so. Someone whom when their own family took issue with their sexual orientation, we simply moved from an apartment to a house in order to give them a space more homey than sleeping on a living room sofa. (Moving was not a simple task, it was an exhausting and arduous one that I bookended between shifts and did not sleep until our home was settled enough that Alli could sleep when she was home, as she was working the overnight shift.) Someone who sat me down when we were both stoned and ravenous in a Taco Bell and begged me to talk to our mutual friend Kay about me potentially being trans in the first place.

Everyone else saw the red flags. Mostly because everyone else was privy to conversations about me that I was unaware of.  It started out innocuously at first. Asking my wife if she was okay with my transition as at the time we both identified as lesbians. (I was absolutely, without a doubt aware that I still had attractions to men. I was just both dealing with the trauma of my sexual assault and my tumultuous brain attempting to suffocate the male voice within me that was screaming for air.) Wondering if any of the rest of my friends had concerns. Things that easily came under the guise of a concerned best friend, simply paving the way to make my transition as easy as possible, considering it was also following a quarter life crisis/mid-20s mental breakdown. Later it was conversations with my now ex-employer about if it was just a phase, in front of other co-workers. I found out well after the fact that not only was it decided that it was a phase; it was also a ploy for attention, something to keep me in the spotlight with my other friends, and a way for me to justify my previous suicidal fixations. I am retrospectively grateful that I did not find out most of this until well after the end of our friendship, but I know that maybe if she did not harbor such Rowling-esque feelings on trans people, that maybe she would not have skipped out of the house leaving us with three months of her rent and utilities to cover. But she did, and she did so in a vindictively cruel way, leaving me with nothing good from a five-year friendship but some drunken pictures from outside of dingy punk shows and a pile of memories tarnished by the words she hurled at me on her way out of my life.

One of our last conversations that sticks with me to this day was a drunken night like so many. Mario Kart, mediocre pizza and Moscato, and us smoking cigarettes on the back porch as the autumn leaves trickled to the ground. I had socially transitioned, but was still a half year away from hormones as we stood outside bantering about a band that has since broken up and gone its separate ways in such a metaphorical representation of that period of my life. I knew by now that she had some major hang-ups with my transition, but the naivety within me had me believing it was more an issue she has with men in general, and not my transition itself. To be able to look me in the eye, on the porch we shared because she needed a home, and tell me that she would never see me as anything more than a girl stuffing a sock into her pants; cut through to my core.

As the days lead up to the election this year, I think of everything that has changed in the last four years. The sleepless nights, shed tears and blind rage moments of an administration that champions bigotry and panders to a rationale that at best sees me as a mentally-ill deviant, and at worst, a pervert looking to corrupt children and tear down the very fabric of society. The parallels between where we have allowed ourselves to get as a country, and how my ex-best friend was able to justify how she exited my life are not lost on me. The ability to separate people from ascribed statuses in the eyes of people who vote without a conscience is the exact same farce that I used to hear from my best friend. I would attempt to get her to realize how her dismissal of my gender identity immediately following her own family doing that to her over her sexuality was the very definition of hypocrisy. If you knowingly do so, with all of the evidence of the ramifications as clear as crystal blue waters, I have one thing to say to you. It is the last sentence I sent to my friend before blocking her number and beginning the process of healing, I don’t forgive you.