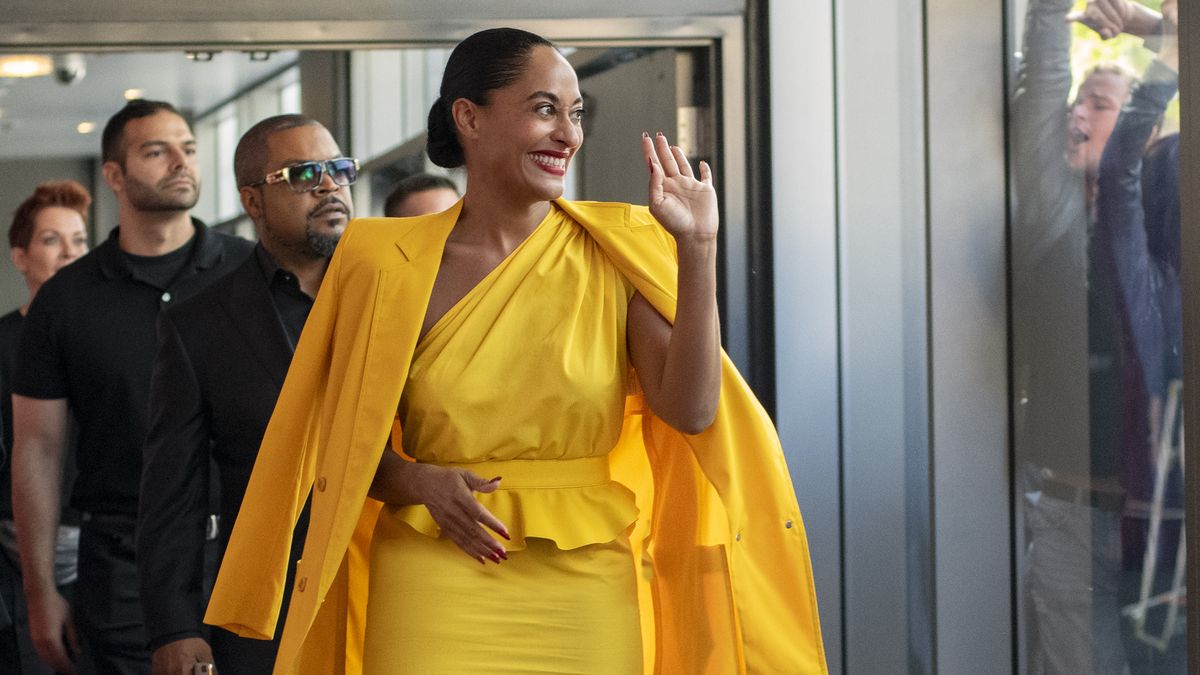 While watching “The High Note” (Focus), Tracee Ellis Ross’ first major motion picture role as a lead actress, don’t be surprised if you find yourself thinking, “Well, this could have gone either way.” Even in the more than capable hands of lesbian filmmaker Nisha Ganatra (“Late Night” and “Chutney Popcorn”), and without the star power of say, Emma Thompson, “The High Note” could have gone sour. As it is, it can be kind of pitchy.
Ross, the daughter of diva Diana Ross, plays Grace Davis, a celebrated recording star with 11 Grammys to her name struggling to stay relevant in an industry that favors the young. The best years of her recording career appear to be behind her as her record label is only interested in releasing greatest hits compilations or live albums (in which she sings her hits). Her longtime play-it-safe manager Jack (Ice Cube, who proves himself to be a better actor than he has previously and manages to make his hackneyed dialogue sound almost realistic) is prepared to relegate her to a Caesar’s Palace residency, but Grace isn’t so sure about that.
Her over-worked and undervalued assistant Maggie (Dakota Johnson) has other ideas. The daughter of a radio DJ (Bill Pullman), music has always been an integral part of Maggie’s life. Additionally, she is a lifelong fan of Grace’s, so being her assistant (for three agonizing years) is kind of a dream job, verbal abuse aside. Maggie has dreams of being a music producer and has taken it upon herself to remix a track from the live album. Suddenly, Grace (and Jack) see a new side to Maggie; it’s one that Grace cautiously admires and Jack dismisses offhand.
Complicating matters for Maggie is the introduction of singer/songwriter David (Kelvin Washington, Jr. who was so amazing in “Waves”). David hits on Maggie in a market and they soon discover that they share a common love and encyclopedic knowledge of music. The combination of Maggie’s connections (about which she is tight-lipped, possibly to her detriment) and David’s exceptional talent leads to them work together. They even collaborate on a song and Maggie ends up providing backing vocals in the recording studio.
For a while, Maggie is able to keep Grace in the dark about her side project. All the while Grace appears to be growing fond of Maggie. A scene in which Grace asks Maggie to pick her up after a date goes south and finds the pair at a food truck in Maggie’s beater Nova is one of the comedic high points. But the laughs don’t last, especially after Maggie fails at a particularly demanding task and is canned by Grace.
It’s worth mentioning that the scene-stealing supporting cast, including Zoe Chao (“Almost Love”), as Maggie’s roommate Katie, and June Diane Raphael, as Grace’s clueless housekeeper Gail, are practically worth the price of admission alone. In addition to that, Ganatra also subtly queers things with the presence of out actor Jeffery Self as Josh, the assistant to pop music star Dan (cross-dressing actor Eddie Izzard). For the most part, “The High Note” follows a predictable pattern. It also focuses too much on Maggie when Grace is by far the more interesting character. But truth be told, the jaw-dropping surprise twist near the end (NO SPOILERS HERE) takes it to a different, if somewhat unbelievable, level.
Rating: B-