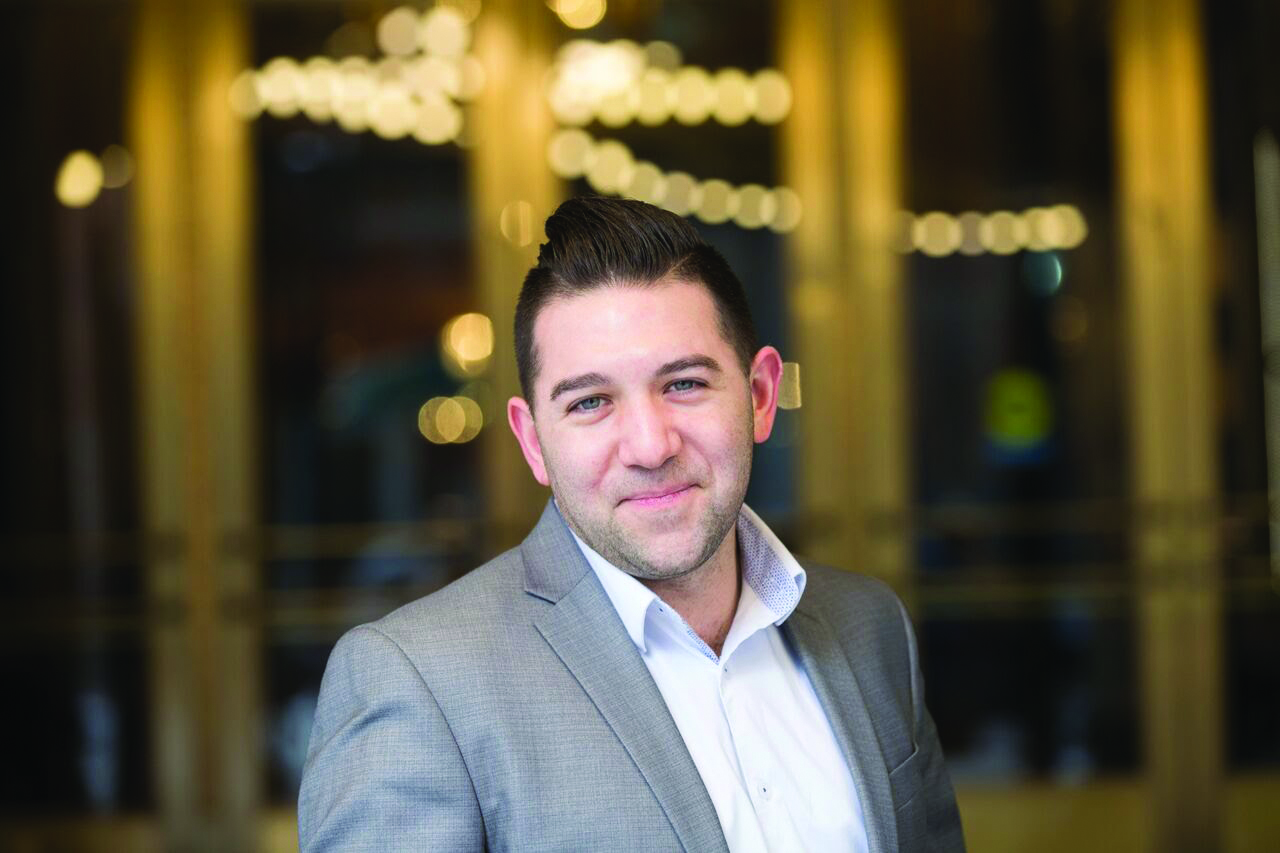 “Food, just like theatre, tells a story,” says Chris Mahan, VP of venue operations at Baltimore’s Hippodrome Theatre. Lounging in iconic Matthew’s Pizza, Mahan recently sat down with Baltimore OUTloud to reflect upon his one-year anniversary at the Hippodrome Theatre, as well as a freshman resident of Charm City.

“It’s my first anniversary, and I continue to fall in love with Baltimore,” began Mahan, who hails from Worcester, Massachusetts. “Baltimore reminds me of where I came from. There’s something about coming from a working-class city, just a down-to-earth, ‘work hard and do the right thing’ kind-of-city. Baltimore reminds me so much of Worcester.”

Mahan’s journey to Baltimore began by chance when he was about 12 years-old. “The whole reason I got into this business is a funny story. When I was 12, I was home watching TV and it was an episode of Robin Leech’s ‘Lifestyles of the Rich and Famous.’ I used to love to watch it because I was always obsessed with rich people and their whole lives. The specific episode I was watching was about Alyssa Milano, who at the time was on ‘Who’s the Boss?’ Robin Leech was exploring her brilliant, Beverly Hills mansion. I started connecting the dots in my head, thinking, ‘Well, I’m 12 and Alyssa Milano’s 14, and we’re not that far apart. And, oh my God, she has all this?! I could get this. How do I get there?’ and it hit me, ‘Oh, she’s an actor. All I have to do is become an actor and then I can get rich and I can have a mansion.’ I mean this was completely logical, right?” Mahan laughed. “So, I told my parents that I wanted to be an actor.”

His parents eventually enrolled him into a Catholic High School with a well-respected theatre program. “After my freshman year, my dad threatened to pull me out because I wasn’t really doing anything with it. I eventually volunteered to be part of the stage crew for The Glass Menagerie.”

Crediting the director’s desire for a “full-immersive experience,” Mahan eventually became hooked with working behind the scenes. “The director also wanted smells for audiences to be immersed. I remember, at some point in the play, I had to go off into this room far away from the theatre with a little plug-in skillet and cook up half a pound of bacon. I then had to bring the skillet into the theatre and put it in front of a fan and let the bacon smell fill the theatre, because it was a breakfast scene in the house.” Mahan laughed, “Well, you wouldn’t think so, but it was at that point I was locked in on the magic of theatre.”

Mahan enjoyed being backstage. “I loved the business of making the show happen. I knew I had a talent for things behind the scenes.” This led Mahan to enroll in Emerson College in Boston. Mahan graduated with a BFA in theatre production and management.

“I was very fortunate, as I was leaving college,” continued Mahan, “because a friend of mine told me that Broadway Across America in Boston, which back then was known as Pace Theatrical Group, was hiring an entry level position and it would be a great foot in the door. So, I submitted my very light resume and they called me in late May. After a couple of different interviews, they contacted me at the end of June and offered me the job.”

Working in the basement of the Colonial Theatre in Boston, Mahan slowly worked his way up the ranks. “I began by answering the telephone and filing new-hire paperwork. I did that for a year and then was asked to start working nights and managing the floor and working with customers. A few years later they asked me to do a little bit more and take on more responsibilities.”

Ironically, Clear Channel Entertainment renovated both the Hippodrome in Baltimore and the Boston Opera House at the same time in 2004. The opening of the Boston Opera House caused the shifting of many staff members at the Colonial which led to Mahan’s promotion to become general manager. After serving in that role from 2005 to 2011, Mahan moved over to the Broadway Across America Boston office and eventually promoted to general manager. Mahan stayed in that position until he was invited to come to Baltimore to take over venue operations at the Hippodrome.

“The Hippodrome, first off, is an absolutely gorgeous theatre. The Boston Opera House, where I was for so many years, was designed by Thomas Lamb who also designed the Hippodrome. When you walk into a Thomas Lamb theatre, you know it as soon as you walk in the door. Hippodrome felt familiar and is just such a gorgeous theatre. It’s one of the most impressive performing arts complexes in this country. It’s the size of a whole city block! That’s a lot of space. Visitors can have a very pleasant theatre experience here. There’s also a kinship at the theatre. The staff is just so unbelievable and everyone is so nice. It was impossible for me to say no to working there.”

“I’m really lucky to work alongside Ron,” Mahan says of Hippodrome’s president, Ron Legler. “I think he and I share all the same values and vision for what a performing arts center should be. First, we both believe that it’s a great privilege to be the steward of a building like this. The second thing is the customer experience. Theatre can be so magical, and we want everyone who walks in to have that great magical night that we ourselves first experienced when we were nine or 12 … and that’s just never-ending work. You’re always trying to make sure everything is working as well as it can. If everyone’s happy, had a great time and love what they saw then that’s just a great feeling.”

Mahan added, “You really get that sort-of outside-of-the-bubble perspective when you stand in the back of a packed house during a curtain call. It’s unbelievable to watch 2,200 people stand up at the same time, smiling from ear to ear, clapping and shouting. It’s a communal experience. It just makes your heart swell because you had a small part in making that happen for everybody.”

The allure of Charm City has cast its spell on Mahan. “This city is just so remarkable. We have a major baseball team, a major football team, and one of the best quarterbacks in the NFL. I’ll give Baltimore credit for this: I’ve never been a sports person, but since I’ve been here, that’s what I’ve become. It’s in the DNA here.”

Mahan is now proud to call Baltimore his home. “I love my neighborhood. I visited Baltimore about seven or eight years ago, and I had a nice tour of it. But when I came back here in December 2018, I landed in Fells Point and absolutely fell in love with it. The first time I walked down Broadway Street, and the square opened up decorated for Christmas, I was like ‘What is this place?’ It’s out of a storybook. I still feel that way every day when I get home. It’s like a little town square. To me, Fells Point is just like a fairy tale.”

Taking a look down at his slice of Matthew’s pizza, Mahan added. “There is so much food in Baltimore. I think that’s one of the most important things in this city. Food, just like theatre, tells a story. All of these restaurants opened because the owners have some story about food. They grew up in a house where everything was around a kitchen table and they want to bring that experience to everyone else. It’s just like theatre, too – we want to share the experience with our visitors.”