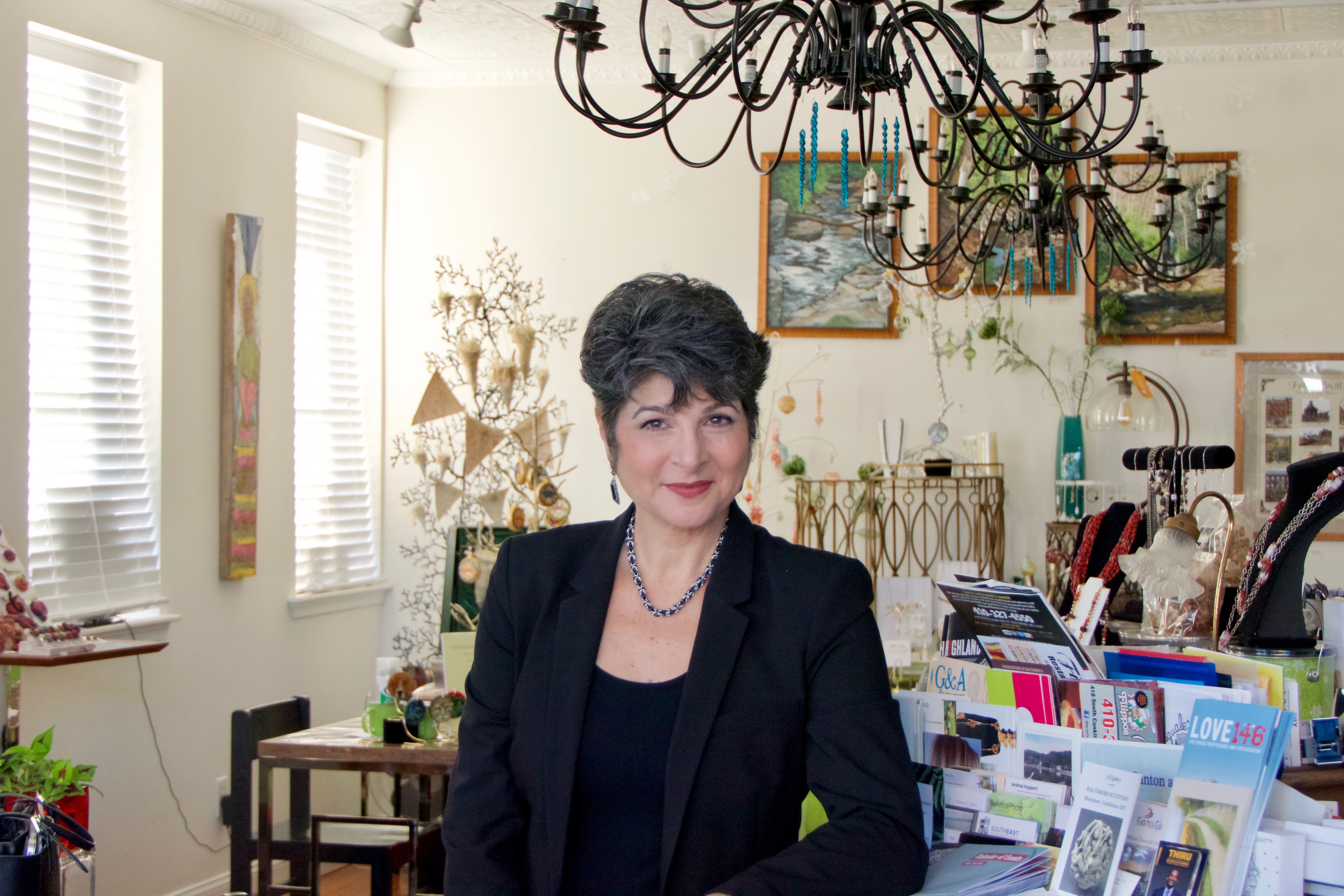 Growing up in Baltimore’s Highlandtown, Felicia Zanninio-Baker’s love for her neighborhood began very young. Today her creative talents are helping positive change in her community. As the owner and proprietress of the Highlandtown Gallery, as well as Magnolia Designs, the interior designer has long been a supporter of local artists within the community.

“I was brought to Highlandtown when I was just three months old,” Zannino-Baker began. “From a very young age, I was very involved with the Italian culture. We sang, danced, and performed in Italian costume from the age of seven.” Zannino-Baker, whose father founded Zannino Funeral Homes in 1958 in Highlandtown, lived atop the family business through high school. “I went to a very strict parochial Catholic school, and then from there I went to MICA (Maryland Institute College of Art). This was a huge culture shock for me! It was the 80s and I went from a Peter Pan-collared uniform to people with purple hair that was sticking up in the air, punk rockers, and students from all over the country and the world.”

Zannino-Baker had originally wanted to study clothing design, and went to MICA with that intention. “From my young days of performing, I wound up designing and sewing Italian costumes. I went to my first sewing class when I was around ten. I’ve always been involved in the visual and performing arts for as long as I can remember. I took dance all of my life, and was always the lead singer in high school plays. I even studied voice at the Peabody for a few years.”

The female role models in her family encouraged her to pursue her passions. “One of my greatest inspirations was my father’s sister, Margaret Rose Mastellone. She graduated from MICA in fashion design. She, as well as my mother’s example of running my father’s business while also running a household, inspired me. First and foremost, though, they were both mothers. From their example, I felt empowered to make my dreams both personally and professionally.”

While at MICA, Zannino-Baker eventually changed majors to interior design and has been working in that field ever since. “Right after I graduated, I managed a showroom at the Washington Design Center, which introduced me to every aspect of interior designs: textiles, furnishings, lighting, etc. Then, I worked in a high-end interior design firm until I opened my own firm in 2000.” Zannino-Baker’s Magnolia Designs is the parent company to Highlandtown Gallery and has offices above the gallery, and also has a branch in Washington, DC.

The gallery is just across the street from her family’s home and funeral business. The earthquake of 2011, however, left the building in ruins. “I had to make a choice: Do I let it go or develop the location? My choice was to develop it,” she relates. Since Highlandtown is a designated arts and entertainment district, it made perfect sense to open a second interior design studio here and couple it with an art gallery.

A former president of the Highlandtown Merchant’s Association, Zannino-Baker says the gallery’s format was always going to be multifaceted, like the neighborhood, with art, gifts, and design services. “We have Highlandtown and Baltimore-centric gifts and accessories with a focus on fine art of local artists. All the books are of Maryland or of Maryland artists. All the CDs are musicians from Maryland. The coffees and candies that we offer are from small local kitchens in Maryland. We also conduct ‘History of Highlandtown’ talks and features on the community. This is in addition to having the artists come into the gallery, in a more intimate setting on Saturday, and talk about their work and their processes. One of my most important goals is to serve both the first-time and the seasoned art buyer.”

Zannino-Baker was very conscientious in how she developed her gallery. “I spoke with several gallery owners and artists in the community before I developed my format. I came up with my programming based on what I learned from them. I examined what worked and what didn’t.” It was always Zannino-Baker’s vision to have a series of galleries on the first floor. “My vision came to fruition as we have the Highlandtown Gallery, Zwiebach Creations Gallery, and Night Owl Gallery all housed in one location. We have three visual art expressions bringing something very unique to the public, and I guess the icing on the cake is all three of the gallery owners happen to be MICA graduates of three different generations.”

Looking forward, Zannino-Baker envisions the future of the Highlandtown Arts District as a beacon for those who are passionate about the arts and community.