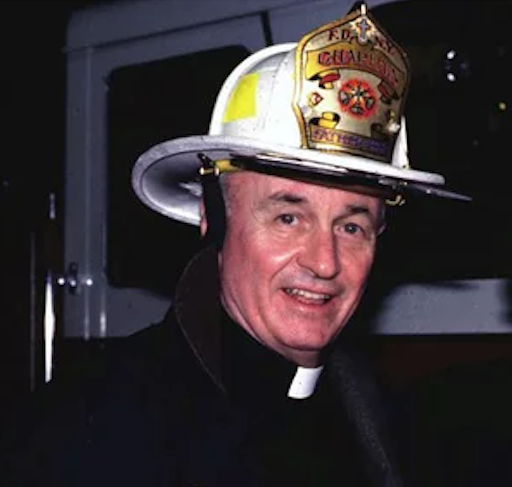 New York City – Dan Tracer writes in Queerty that Mychal Judge was a Roman Catholic chaplain in the New York City Fire Department who often worked within the local LGBTQ community and other marginalized folks living with HIV. On September 11, 2001, the 68-year-old priest was the first to be recorded dead in the terror attacks that would ultimately claim nearly 3,000 lives. In the chaos of the initial attack on the World Trade center in lower Manhattan, Judge went to the Twin Towers to pray for the scores of victims and first responders. As he entered the lobby of the north tower, he was killed by falling debris.

Although not openly Gay, 20 years after the attack, New Ways Ministry, a Catholic organization that works to advance LGBTQ rights, wants the Catholic Church to make him a saint. News Ways Ministry Executive Director Francis DeBernardo wrote in a blog post on September 11 that, “The time has come for the Catholic Church to officially recognize Fr. Mychal Judge as a saint by canonizing him.” If granted, Judge would become the first, known gay saint in the Catholic Church’s history. New Ways announced in a press release that it was contacted by a Vatican official seeking people to testify about Judge. In order for the process to continue, an association of supporters is needed to speak to the church on his behalf. “The work of such an association would require many hands,” DeBernardo wrote, “and would most appropriately be done by a coalition of the varied and diverse people and groups whose lives Father Judge touched.”

A Brooklyn native and the son of Irish immigrants, Judge joined the priesthood in 1961. His work led him to helping marginalized communities after he recovered from alcoholism in Alcoholics Anonymous. He founded a Catholic HIV ministry, one of the first of its kind, that regularly visited hospitals to assist patients and their families. In 1992, he joined the New York City Fire Department. The few friends that were aware of his sexuality say he observed the vow of celibacy. After his death, more people learned he was gay. As “Father Mike” himself once said, “Is there so much love in the world that we can afford to discriminate against any kind of love?” (Queerty – Dan Tracer at https://queerty.us1.list-manage.com/track/click?u=ecab442566f15d8d4dcf64b0d&id=e2cc4fdf9d&e=182e2fff67)