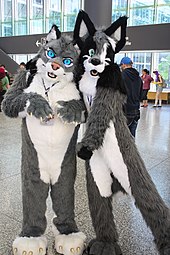 Midland, MI – Bil Browning reports in LGBTQ Nation that a Michigan school superintendent has been forced to send a message to parents that debunks the rumor that a high school had installed litter boxes to accommodate “furry” students. The rumor was started by an anti-LGBTQ parent upset over federal regulations that allow transgender students to use the restroom in school that matches their gender identity. She insisted that students who identify as cats can use litter boxes in one school’s unisex restroom. The ridiculous rumor was widely mocked until it was picked up and amplified by local Republicans online.

Michigan Republican Party Co-Chair Meshawn Maddock didn’t realize the far-fetched allegation was obviously fake. Michigan GOP officials also pushed the “Big Lie” that former president Donald Trump won the last election and urged insurrection during the start of the coronavirus pandemic. “Kids who identify as ‘furries’ get a litter box in the school bathroom,” Maddock posted on her Facebook page the afternoon of January 20. “Parent heroes will TAKE BACK our schools.” Maddock did not let her followers know if teens who “identify as dogs” were taken for a walk during recess.

“It is unconscionable that this afternoon I am sending this communication,” Superintendent Michael E. Sharrow wrote in an email to parents. “There is no truth whatsoever to this false statement/accusation! There have never been litter boxes within MPS schools.” Furries are part of a subculture that enjoy dressing up and acting like anthropomorphic animals. Most devotees are white males in their late teens to mid-20s and are seven times more likely to identify as transgender than the general population. The community is known for being welcoming and non-judgmental. (LGBTQ Nation – Bil Browning at https://www.lgbtqnation.com/2022/01/gop-official-insists-high-school-installed-litter-boxes-accommodate-students-identify-cats/?utm_source=LGBTQ+Nation+Subscribers&utm_campaign=8c6b6e18ed-20220125_LGBTQ_Nation_Daily_Brief&utm_medium=email&utm_term=0_c4eab596bd-8c6b6e18ed-433273132)