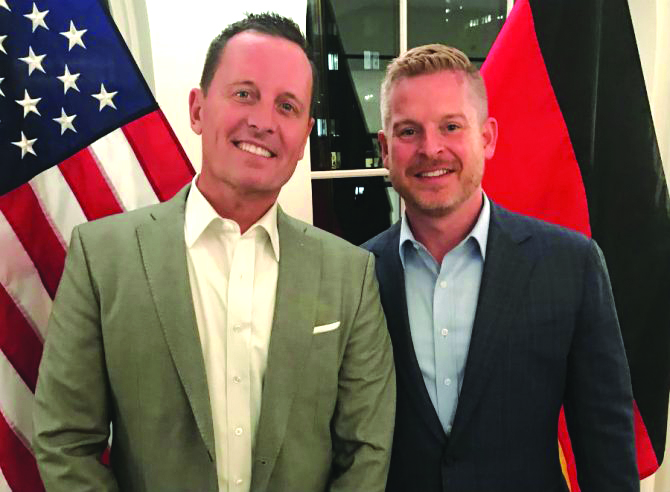 Washington, DC  Donald Trump named Richard Grenell, US ambassador to Germany, as acting director of national intelligence on Wednesday, February 19th. He becomes the first openly gay person to hold a cabinet-level position. He has no experience working in intelligence. Max Boot, in a February 20th article in the Washington Post said, President Trump has done a lot of crazy, scary things since being acquitted by the Senate on February 5th  from protecting his friends in legal trouble to punishing witnesses who testified against him. But quite possibly the craziest and scariest thing he has done is to appoint ambassador to Germany Richard Grenell as acting director of national intelligence.

Grenell was nominated to be ambassador in September 2017 and was confirmed by the Senate by a 56-to-42 vote. He has been serving since April 2018. In his position as ambassador, Grenell called Germanys NATO contribution woeful and criticized the countrys immigration policy. On his second day in office, he issued a statement that said, German companies doing business in Iran should wind down operations immediately. That was considered inappropriate and taken as a threat. During his term in office, Grenell continued to interfere in German politics, siding with conservative political parties in interviews and making statements the German government found offensive. Before that, Grenell served as spokesman under four ambassadors to the United Nations, where he was not well regarded. Max Boot wrote in the Washington Post that veteran Reuters correspondent Irwin Arieff told HuffPost that Grenell was the most dishonest and deceptive press person I ever worked with. He often lied.

In 2012, he served for a short time as foreign policy spokesman for Mitt Romneys presidential campaign. In that position, he was the first out spokesman for a Republican presidential candidate. But Grenell stepped down after just a few weeks because of right wing protests from within the Republican Party over his sexual orientation. Boot said in his Washington Post opinion piece, Grenell became a noxious pro-Trump troll in 2015-2016. He claimed that a Gold Star father criticized Trump to enrich himself, called the Democratic convention an anti-police rally and suggested that a female journalist slept her way into her job. He badgered and harassed journalists online (including me). He was such a Trump toady that he even acquired Gold level status at the Trump International Hotel in Washington. (Dallas Voice  David Taffet at Dallasvoice.com/gay-man-named-director-of-national-intelligence/ & the Washington Post  Max Boot at Washingtonpost.com/opinions/2020/02/20/trump-appoints-partisan-propagandist-run-intelligence-community)