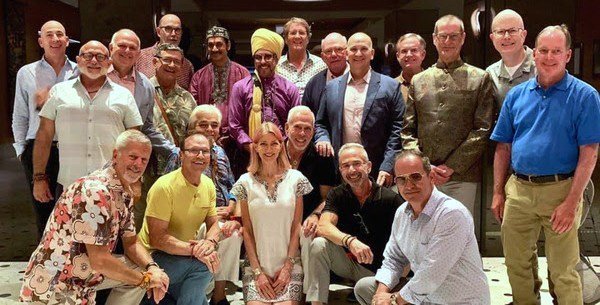 Mumbai – Travelers on a tour through India with Miami Beach-based Source Events engaged in an up-close and personal meeting at a private reception with Prince Manvendra Singh Gohil, India’s openly gay royal who has become one of the country’s most vocal advocates for LGBT rights. “Travel at its best enriches us with new connections and a deeper understanding of the world in which we live,” said Craig Smith, president of Source Events. “Given the high profile of Prince Manvendra, (including an appearance on “Oprah” in 2007), and his commitment to improving the lives of LGBTQ people in India, a get-together with the prince was a natural fit,” Source Events staff shared.

At a reception, the 21 members of the tour were able to interact in an informal setting with the prince, who was joined by his husband Duke DeAndre Richardson. During that time, they learned about the challenges faced by India’s LGBT population, as well as the work of the Lakshya Trust, the foundation established by the prince to advocate for, and improve the lives of, the marginalized communities of LGBT people and those infected with HIV in India. “Meeting with Prince Manvendra and his husband, and learning firsthand about their monumental work was inspiring,” said Liebe Gadinsky, co-chair of the National Gay & Lesbian Task Force, who was on the trip with her husband.

The 53-year-old prince had previously lived a very closeted life, conforming to the expectations of his family and fulfilling his royal obligations, including a marriage that was never consummated. It was in 2000, while still not out publicly, that Prince Manvendra established the Lakshya Trust, and in 2007, the year after he came out, he was invited to appear on the “Oprah Winfrey Show,” which brought international attention to India’s LGBT issues. During the reception, Prince Manvendra announced that his dream of establishing India’s first LGBT center will become a reality this year, and Source Events pledged their financial support to the project. “My own journey is the reason behind this center. I was disowned and disinherited from my ancestral property after going public about my sexual orientation,” he said. “I understand the kind of struggles that LGBTQ men and women face after coming out, and my hope is that the Center will provide a safe and empowering space for others to achieve their potential.” t (Q Notes Online – Lainey Millen at Goqnotes.com/62826/indian-gay-price-welcomes-events-travelers)