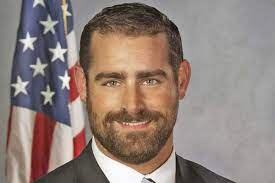 Philadelphia, PA – Brian Sims, a member of the Pennsylvania House of Representatives and the first openly gay elected state legislator in Pennsylvania history, has shared an inspiring story about family, sacrifice, and going above and beyond the call of duty to help others. Sims, 42, a Democratic lawmaker who recently announced that he was entering the 2022 race for Lieutenant Governor, posted a tweet about sitting down to a meal with his parents and a man to whom he donated his kidney last year. “FAMILY: Last night my parents came into town for the first time since my surgery last January and we had dinner with the recipient of my kidney and his husband! Families come in all shapes and sizes. Ours is pretty special,” he said. In a follow-up posting on Facebook, Sims explained about reconnecting with the recipient of his donated kidney: “Last month I was walking through the city to my office and passed a table and did a double-take. My recipient Alan and his husband John were sitting having lunch. A perfectly normal, healthy, happy couple sitting in the sun enjoying each other’s company. It was perfection! I stopped and we all held back tears and just tried to enjoy the ‘normalcy of days that are truly a gift.”

Sims actually revealed he was a living donor last May. He had previously kept the information private but went public in response to a Covid-19 scare in the House of Representatives. Blasting House Speaker Mike Turzai for allegedly knowing some GOP lawmakers had tested positive and not informing Democrats who sat alongside them, Sims revealed what he’d done. “Members in this room have small children, elderly family members that they care for, spouses with autoimmune diseases, and lives that constantly put us at risk of interacting with others,” he tweeted. “For me, my story wasn’t supposed to be told, but here goes… “In late January I secretly donated a kidney to a person who lives about 10 blocks from me in the City. He was dying of renal failure and I turned out to be a near-perfect match. I spent several days in the hospital and several days with fifth a friend before returning home. “My recipient began to improve almost immediately and his long-term prognosis is strong, and none of this was ever supposed to be public. People are cynical, especially about politics. And so I decided to share the donation with only my friends, staff, and family.”

Since that time, besides being a progressive LGBTQ activist, Sims has also spoken out to encourage people to consider being living donors. In January he posted a video encouraging people to think about donating. Donating a kidney to a loved one or stranger is no small task, but it can literally save a life. Some of those reacting to Sims’ recent tweet have praised him for his actions, while others have shared their own donation-related stories. Nearly 100,000 people are on the waiting list for a kidney in the U.S. To find out more about kidney donation, check the website for the American Kidney Fund. (Queerty – David Hudson at https://www.queerty.com/rep-brian-sims-gave-one-kidneys-dying-gay-neighbor-20210514?utm_source=Queerty+Subscribers&utm_campaign=7bbbd5ba91-20210514_Queerty_Newsletter&utm_medium=email&utm_term=0_221c27272a-7bbbd5ba91-431876119)