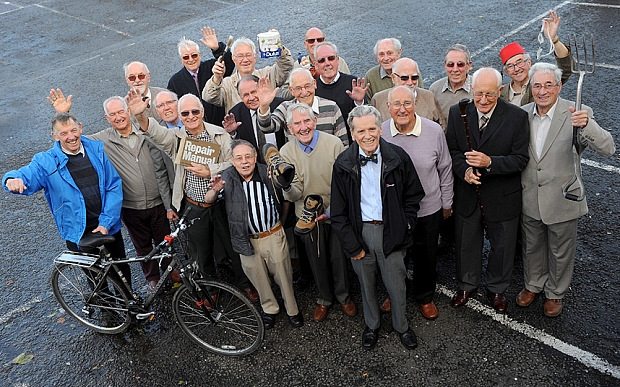 At an age when many believe that life is winding down, it’s just getting interesting. Occasionally someone will say to me, “You look good… for 73.” I’ve also heard variations such as, “I’d never guess you were that old.” When I first heard these comments from people, I felt good, as if I’d pulled one over on them. Sometimes I would respond, “I don’t feel like I’m 73.”

But when I hear one now, I think, “What the hell were you expecting me to look like?” It’s a little like hearing someone say, “You don’t sweat much … for a fat man.” But the corollary is, “What the hell was I expecting?” I didn’t come out as gay until 1986, when I was 43, and occasionally I heard, “You don’t look gay.” I had been married to my wife for 18 years and had two teenage daughters at the time, and I was beginning a career as a medical executive. I feared I had a lot to lose if I “looked gay.”

Now I understand better. In both cases, aging and being gay, what I was responding to were stereotypes. Stereotypes exist when a characteristic is elevated to master status and people begin to assume that what is true for one must be true of all. While stereotypes are always true for some, they are never true for all. Coming out is basically a way of saying, “I am gay (or I’m old). Deal with it.” Coming out to others, telling our stories, is the most effective way to shatter the stereotypes of what it means to be old or gay.

But coming out doesn’t begin by telling others; it begins with our saying to ourselves, “I’m old or I’m gay, but I’m okay with that.” Gay or straight, young or old, we were all raised in the same society, so we all internalized the same stereotypes as well. For me, coming out became possible when I recognized the great diversity within the LGBTQ community. I could no longer say, “I can’t be gay because I don’t fit that stereotype.”

A few years ago, after I spoke to a group of older gay men in Houston, a man raised his hands in the air and said, “I’m 82 and this is the best time in my life.” I thought, “What does he know that I need to know?”

What I learned from that older man was that opportunities come with aging – ones we’ve never had before and will never have again. Age brings with it a sense of freedom. I’d spent my life rushing from patient to patient, meeting to meeting, collecting a junk drawer of brass rings I thought I had to catch.

When I was a child, 73 was old for a man and not many men lived that long, but now I have a life expectancy of another 12 years. What I should be saying is, “I don’t feel like what I thought I would feel at 73.” Potentially, I have been given a gift of 12 additional years.

One of the freedoms I have as an older man is the freedom of time. Although time carries with it some sense of urgency because I know that my time is limited and diminishing, the freedom comes from knowing that I can choose to do only those things that are most important to me. I warned the minister at my church that his sermons had better be good; I don’t have time to waste sitting through a bad one.

That freedom of time gave me the opportunity to write Finally Out: Letting Go of Living Straight. During the process of my coming out, I realized that very little had been written about men and women who wrestle with the decision of coming out later in life. I also knew that suicide attempts were three times more common among gay men than in the general population, and those attempts were often associated with deciding to come out.

I wrote Finally Out to provide understanding and a message of hope. We can be old. We can be gay. Let us celebrate both.

Loren A. Olson, MD, is a board-certified psychiatrist with over forty years of experience. He is a Distinguished Life Fellow of the American Psychiatric Association and has been named an Exemplary Psychiatrist by the National Alliance for Mental Illness. He is the author of Finally Out: Letting Go of Living Straight.