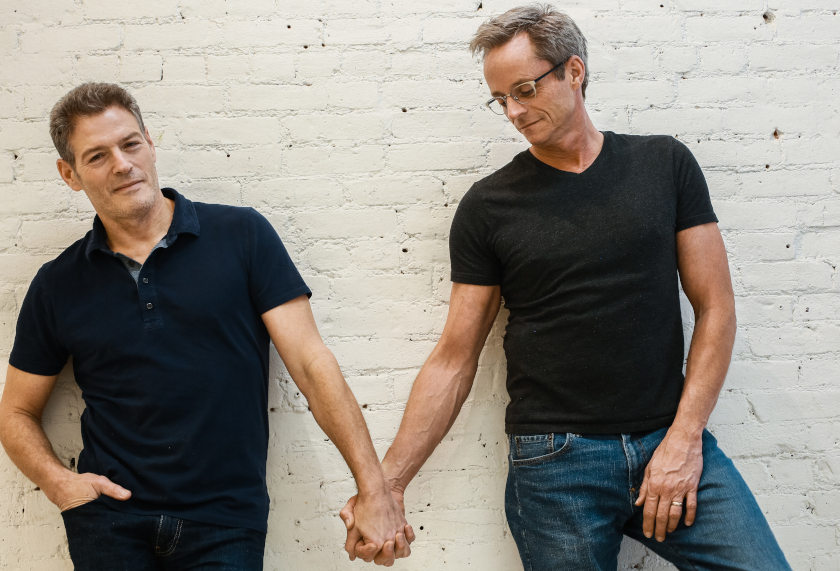 Thomas Wolfe once said, “Loneliness is and always has been the central and inevitable experience of every man.” Currently streaming on Amazon, After Forever tackles the age-old story of love and loss through the lens of a gay couple in their 50s living in New York. Currently streaming on Amazon, the Emmy Award-winning, eight-episode series follows the journey of Brian (superbly portrayed by Days of Our Lives alum Kevin Spirtas) and Jason (portrayed by the equally talented Doogie Howser alum Mitchell Anderson) as an older couple who seemingly “have it all” until Jason’s untimely death forces Brian to re-evaluate his own future without the love of his life. Baltimore OUTloud chatted exclusively with co-creators Michael Slade and Kevin Spirtas regarding the inspiration behind the series, their upcoming visit to the Columbia Film Festival and their recent five Daytime Emmy wins. 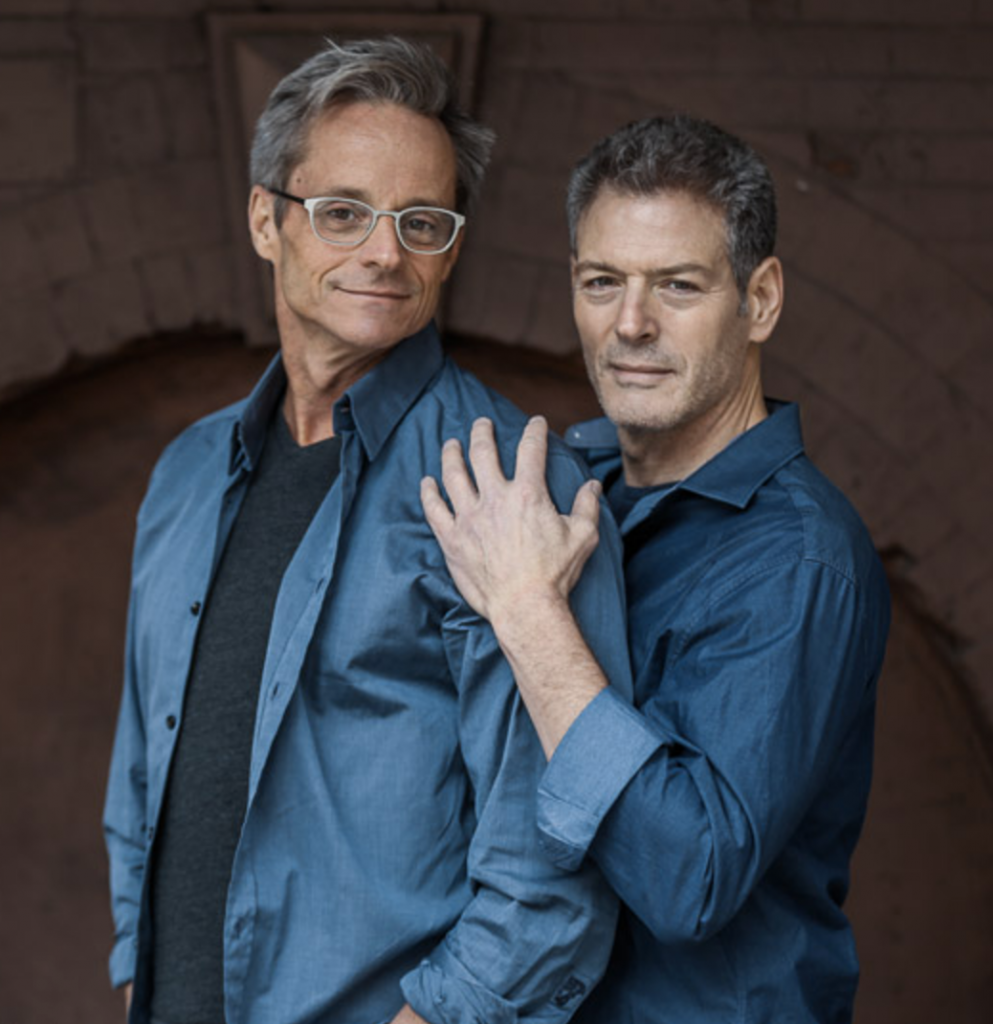 “I was looking to create something,” says co-creator and actor Kevin Spirtas. “I was a little upset that I wasn’t offered roles with my name on it anymore. I ran into Michael [Slade, co-creator] and we had worked on Days of Our Lives together, he as a writer and myself as an actor. They tend to keep the writers and the actors separate. After introducing myself, we eventually discussed how we both felt there was a need for content about gay men over 30. It just wasn’t appearing in our stories anywhere. That was something we both locked into, and I thought maybe we could write a web series together.” 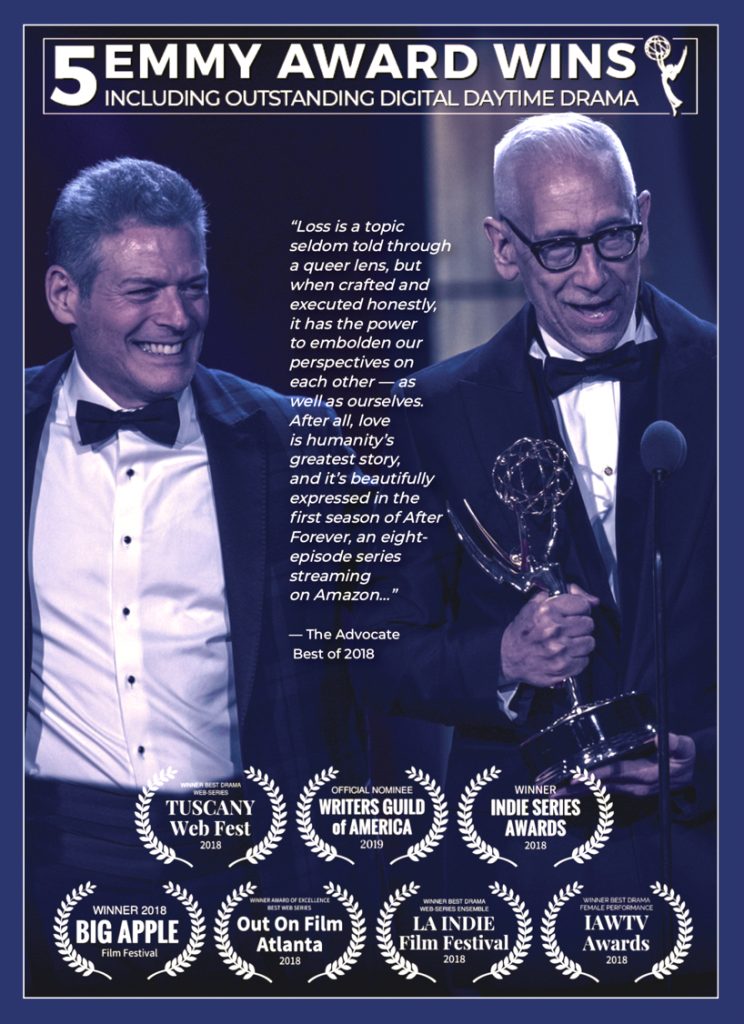 Slade continued, “The reality is that for gay men, like women, once we’re not the 20- or 30-something hot young things anymore we tend to disappear from popular culture. We both felt that creating a series about grown-ups and people our age really spoke to us. That’s because we do continue to exist and have active, vibrant and exciting lives. When viewers see that on screen they now have this role model. There are plenty of young role models in the LGBTQ community today, however, not many find themselves asking, ‘Where will I be in ten, 20, or 30 years?’ Just as suddenly as there are many gay characters for young kids these days, there aren’t many role models out there for the over-50 crowd.”

“Michael and I both came from a time when there are few role models and a few trailblazers,” Spirtas added. “One of the best things about the digital world is suddenly there is room to tell the stories that the networks, or even film studios, don’t tell.”

“When this show won five Emmys last month, it immediately became the most Emmy-honored LGBTQ-focused drama in history,” Slade notes. “Whether cable, network or digital, no dramas have ever done that.” He added, “With the 50th anniversary of Stonewall coming up, one of the things that is particularly gratifying for us is the demographic of who is watching the show. Considering this is a show focusing on gay couples and gay men, we found the demographic was all over the place. We get mail from people gay and straight, from men to women, from trans, from young and old. That is such a statement sometimes in these days when we think of where we are as a country, but when you realize this is happening, you see that we really have come somewhere as a community in these last 50 years.”

“It’s also a post-AIDS epidemic story,” Spirtas added. “These guys are in their early 50s and one man has contracted cancer and died from it. But it’s sort of the way that life happens in real time with a massive epidemic that people are responding to in very different ways.”

Slade continued, “We say in the series that this is the generation that got through the AIDS epidemic. Once you get to this stage, when you’re 50, all that should be behind us. And now, we get to be into our 80s, 90s, or even 100. But, then life happens the way life happens to everyone in the world.”

“After the character of Jason has died,” Spirtas continued, “my character Brian continues the relationship in his mind. [Jason] is so present in Brian’s mind, it’s like he’s still there. Michael and I thought that would be a great way to show and share our own experience. Just because the relationship ends with death, doesn’t mean the relationship ends. Love doesn’t just die. The love you had in this world, if you are able to nurture that, you have it with you always.”

“There is a tremendous amount of humor in this,” Slade added. “It’s not like walking into a funeral. The show operates on three different planes: the present, in flashbacks over the course of Jason’s and Brian’s relationship, and in the space where Jason still exists for Brian. Brian can ‘conjure’ him to have these conversations where they talk things out.”

Slade continued on to add his own connection to Charm City. “I love Baltimore. I became the biggest booster for Baltimore. As a writer, I once had a play being done at Baltimore Theatre Project. At the time, I was living in LA and was about to move to New York. I flew to Baltimore for the last few days of rehearsals, and on the last night, my friends brought a friend to the show. Afterward the four of us walked from the Theatre Project to The Hippo. On that short walk, this guy Richard and I just clicked. We spent the entire night talking to each other and it was the start of what became a wonderful special relationship. We were long distance for the first year-and-a-half, but eventually I moved down to Baltimore. I fell in love with the people and the whole attitude of the town. I found it an incredibly welcoming city. I found the people really nice and what I loved was this sense of gay community there. It’s a manageable sized-city that you feel like you are part of. I loved the notion of, ‘This is who we are, and we’re not trying to be anyone else. If you like us, come join us, and if not, that’s okay.’”

Slade and Spirtas both vocalized excitement that Baltimore audiences will have an opportunity to screen After Forever at the upcoming Columbia Film Festival on Saturday, June 29th from 6 to 8 pm. For info on tickets visit Columbiafilmfestival.org.

For more info on After Forever, visit the official website Afterforevertheseries.com.